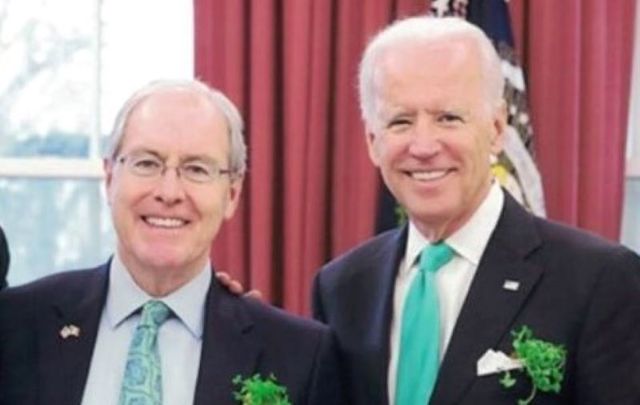 "Catholics for Biden" features 36 national co-chairs, many of whom have strong Irish links.

Former US Ambassador to Ireland Kevin O’Malley is among a number of Irish Americans reported being the national co-chairs for the “Catholics for Biden” outreach initiative.

Should Biden win the election in November, he will become the second Catholic President of the United States - the first was fellow Irish American John F. Kennedy.

On September 14, The National Catholic Reporter (NCR) exclusively reported the “three dozen Catholic lawmakers, ambassadors, educators and nonprofit leaders” who have been named co-chairs for “Catholics for Biden.”

Among the 36 co-chairs are Kevin O’Malley, who served as the US Ambassador to Ireland from 2014 - 2017. Earlier this year, O'Malley wrote an op-ed for IrishCentral "to testify personally about the character of the man who can rescue us from the current chaos, confusion, and corruption of the Trump administration and find the true soul of America – the nation our ancestors sought out in their hour of despair in Ireland."

Representative Brendan Boyle, the only sitting member of Congress with a parent born in Ireland, has also been named a co-chair. Representative Boyle sits on the committee for the bipartisan Friends of Ireland Caucus and last year, he was part of the US Congressional Delegation that traveled to Ireland and Northern Ireland.

Martin O’Malley, the former governor of Maryland, is also a co-chair. In 2019, O'Malley penned an op-ed for IrishCentral slamming President Trump's comments on Baltimore.

Samantha Power, who served as the US Ambassador to the United Nations during the Obama administration, also joins the co-chairs. Born and raised in Castleknock in Ireland, Power's mother emigrated to Pittsburgh when she was nine.

Brian O’Dwyer, the founder of the Emerald Isle Immigration Center in New York, chairman of the Irish Chamber of Commerce USA, and board member for Irish American Democrats, is also among the 36 co-chairs.

Several Kennedys are also serving as co-chairs, including Kathleen Kennedy Townsend, the former Lieutenant Governor of Maryland from 1995 to 2003. Townsend is the eldest child of  Robert F. Kennedy and Ethel Skakel's eleven children, and the eldest grandchild of Joseph P. Kennedy, Sr. and Rose Kennedy.  Her uncle was President John F. Kennedy.

Mark Kennedy Shriver, a former member of the Maryland House of Delegates and current President of Save the Children Action Network, is also a co-chair. His mother is Eunice Mary Kennedy Shriver, sister to JFK.

Shriver's brother Timothy, Chairman of Special Olympics since 1996, is also a co-chair.

NCR additionally names the following people as co-chairs of Catholics for Biden:

John McCarthy, the deputy national political director for Biden’s campaign, told NCR on Monday: "This list of co-chairs represents the diverse coalition the vice president has been able to put together.

"In the coming weeks, we will be deploying them to talk about how their faith motivates them to support the vice president."

Josh Dickson, faith engagement director at Biden for President, told NCR: "We believe the Biden-Harris agenda is deeply aligned with the common good values of Catholics and people of faith and much more aligned with those values than what we see from the current administration.”

NCR separately notes that "Catholics for Biden" is just one of the Catholic initiatives supporting the Democratic nominee. Network Lobby for Catholic Social Justice, Catholic Democrats, and Vote Common Good are all supporting Biden.

On the other side of the aisle, there is also a “Catholics for Trump” initiative, chaired by Catherine O’Neill. Mick Mulvaney, the United States Special Envoy for Northern Ireland, serves on the advisory board.

“Catholics for Trump” says it aims to “energize and activate the Catholic community in re-electing President Donald J. Trump by sharing the many successes of the Trump administration. Re-electing President Trump will ensure continued victories in pro-life issues, judicial appointments, and religious freedom.”

According to NCR, "Catholics for Trump" is one of four major Catholic organizations supporting Trump’s re-election, with the others being CatholicVote.org, the Susan B. Anthony List, and Valor America.

The US Presidential Election will be held on November 3.