“This St. Patrick’s Day we honor our immigrant heritage while guarding the American dream.” 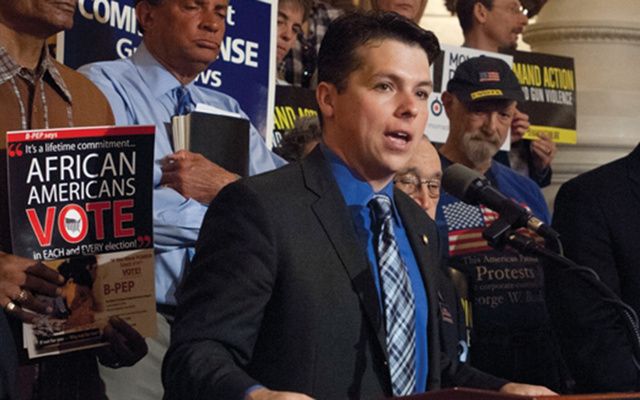 The American celebration of St. Patrick’s Day is a joyous time. We all stand in solidarity with the Irish by wearing green and celebrating Irish traditions. However, the fact that the culture we now celebrate was once the target of malicious anti-immigrant campaigns here in the United States should not be forgotten, especially as such issues rear their ugly head again in today’s politics.

For me, St. Patrick’s Day is an important reminder that we are a nation of immigrants and that our diversity is perhaps our greatest strength as a nation. In my home city of Philadelphia, 12% of the population was born outside of the United States. My father is one of them. He found his American Dream in the City of Brotherly Love. The city was built on his shoulders and millions of other immigrants like him. My father instilled in me a rigorous work ethic, pride in where we’ve come from, optimism for where we’re headed, and patriotism for the country that provided him and his family a better life. He also taught me to appreciate my gift of citizenship and, with that, civic duty. Sadly, that gift is now under threat of being stolen from those who would dare to dream as my father did.

President Trump’s recent executive orders limiting immigration and anti-immigrant rhetoric since the start of his campaign serve only to fan the flames of misunderstanding, xenophobia, and hate – not all that different from that experienced by my Irish ancestors. Their American dream came tainted with the poison of prejudice during the 1800s. Signs displaying “Irish Need Not Apply” surrounded their community. Political parties like the “Know-Nothing Party” organized against them, promising to purify American politics by ending the influence of Irish Catholics and other immigrants. Some died for the simple reason that they were Irish and Catholic. Though this stain on our country’s historical fabric deterred some from the American Dream, many first generation Irish Americans fought back. They faced this hatred head on with hard work and strength of character and succeeded. And their descendants went on to become productive members of their communities: teachers, civil servants, doctors, scientists, etc. It is thought that 22 of America’s Presidents had Irish roots.

Sadly, the “Know-Nothing Party” that we thought was long a thing of the past has re-emerged as part of a new generation. Today, the Right’s anti-immigrant rhetoric and actions are nearly identical to that of the hate-filled political party of the mid-1800s which Irish Americans are all too familiar with. Their mission remains simple: keep immigrants out and blame them for today’s problems; an easy, vulnerable target.

It is now up to every American to ensure that the guarantee of the American Dream continues as this fundamental principle sustains an attack from those who seek to destroy it. It does not matter if your ancestors came here in 2017, 1917 or 1817, we are all in this country because someone before us decided to dream and took a chance in the United States. It is our civic duty to ensure that our democracy continues affording that same opportunity to those who seek our shores for a better life.