Who should Catholics vote for? A surprising answer from Church 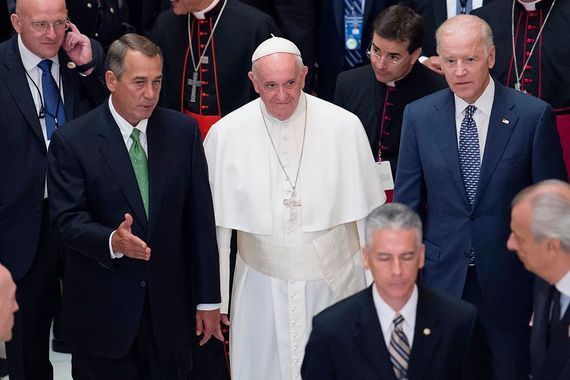 It is a vital question. Who does the Catholic Church encourage you to vote for if you are a Catholic?

The election, after all, likely hinges on Hispanic Catholic turnout and on working-class Irish, Polish and Italian Catholics in swing states such as Pennsylvania and Michigan.

So let's think about the church and its influence. Most, myself included, assume the church backs the anti-abortion candidate Donald Trump but a leading scholar Father Thomas  Reese SJ, former editor of the Jesuit magazine “America” disagrees.

He made his opinions known with a fascinating column in the National Catholic Reporter last week.

We all hear the attacks on pro-choice politicians such as Joe Biden and we have a deep sense that, especially after Cardinal Timothy Dolan appeared at the GOP convention that they prefer the GOP. Dolan’s continuous sucking up to Trump has helped that perception.

Reese disputes that. He writes:  “‘Some (clerics) will falsely tell their flocks they will go to hell if they vote for Biden or any pro-choice candidate. Others will signal their preferences by preaching only on abortion or only on social justice in the lead-up to the election."

Neither position stands up to scrutiny, he says.

"The bishops tried to give guidance to Catholic voters in their statement "Forming Consciences for Faithful Citizenship." In it, they acknowledge "Catholics often face difficult choices about how to vote."

Reese writes that “In two carefully crafted paragraphs, they give their advice. Paragraph 34 reads:

“A Catholic cannot vote for a candidate who favors a policy promoting an intrinsically evil act, such as abortion, euthanasia, assisted suicide, deliberately subjecting workers or the poor to subhuman living conditions, redefining marriage in ways that violate its essential meaning, or racist behavior, if the voter's intent is to support that position. In such cases, a Catholic would be guilty of formal cooperation in grave evil. At the same time, a voter should not use a candidate's opposition to an intrinsic evil to justify indifference or inattentiveness to other important moral issues involving human life and dignity.”

Read more: Why did Cardinal Dolan side with Trump by blessing Republican National Convention?

Reese notes: “First, it is noteworthy that besides abortion, euthanasia, assisted suicide and gay marriage, the bishops also list as "intrinsically evil," policies "deliberately subjecting workers or the poor to subhuman living conditions" as well as policies promoting "racist behavior."

He says that “A liberal interpretation of this text opens the door to a wider range of Catholic social teaching than just abortion and gay marriage.”

Second, he says the "if" clause is very important. A Catholic is in trouble only "if the voter's intent is to support that position."

“So, a Catholic Republican can vote for Trump, even if his policies promote racism or subject immigrants to subhuman living conditions, as long as the voter's intent is not to support those positions.

"And a Catholic Democrat can vote for Biden, even if his policies promote abortions and gay marriage, as long as the voter's intent is not to support those positions.

“In Catholic theology, intention — why you are doing something — is essential to an understanding."

So, to sum it up, Reese is saying if your vote for Biden is for social justice and not his abortion position that keeps you in full standing.

Likewise, if your vote for Trump is not to support his racist policies but say for his economic message that too does not contradict Catholic doctrine.

It is a very interesting take and written in a far more nuanced way than what we hear from most bishops who thunder only about abortion and rarely discuss social justice or immigrant abuse as a reason to vote for a candidate.

It strikes me that Reese has countered the Dolan bias very well with his examination of the issue.