In January of this year, 58 percent of white Catholics approved of Trump, 48 percent approved very strongly, while 42 percent disapproved. 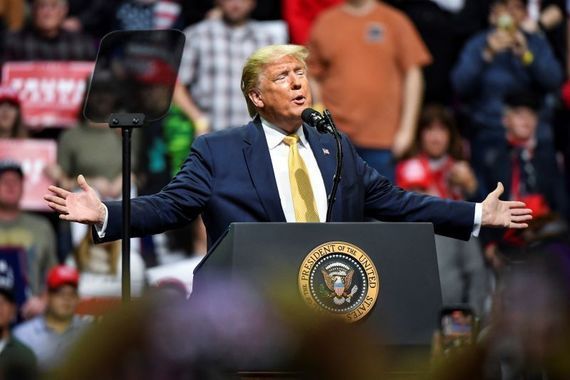 Trump's support among white Catholics is beginning to wane. Getty

However, he still holds a majority of the white Catholic vote.

In January of this year, 58 percent of white Catholics approved of Trump, 48 percent approved very strongly, while 42 percent disapproved.

By April his numbers were still shooting up with 62 percent support, 50 percent strong support, and only 35 percent of white Catholics disapproving.

Then came COVID-19 and the killing of George Floyd and the numbers quickly contracted, though a majority of white Catholics still support him.

He is now approved by 54 percent of white Catholics,  a drop of six points, 44 percent strongly support him a drop of seven points and 44 percent disapprove, a rise of nine points.

Hispanic Catholics have far less time for this president with only 23 percent approving, 12 percent strongly approving and 74 percent disapproving of him.

In fact, Trump's support among Christian groups, in general, has taken a hit since the outbreak of COVID-19 and the Black Lives Matter protests. Around 51 percent of all Christians supported Trump at the beginning of the year, rising to 44 percent in April before falling significantly to 49 percent.

One other extraordinary statistic jumps out of the new Pew Research Center Poll.

These numbers show how steep the mountain is that Trump must climb with only four months left until the presidential election against Presumptive Democratic Nominee Joe Biden.

IrishCentral reader's share with us their memorable stories of a trip to Ireland
How hard is it to buy a gun in Ireland? Does it make a difference?
Pagan idol, 100 years pre-St. Patrick, discovered in Roscommon
GIVEAWAY: Last chance to win a VIP trip for two to this year's Milwaukee Irish Fest!
Tipperary named one of the best holiday destinations for 2022
Check out IrishCentral's brand new Explore Ireland page!
Ireland's thatched cottages disappearing amid insurance crisis
Old Irish mysteries could be solved as historic records from Dublin's Four Courts restored
WATCH: A wonderful look at all around Ireland 75 years ago