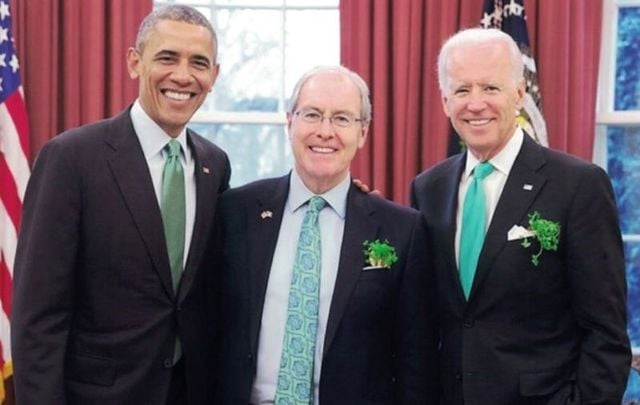 Editor's Note: The below was written by Kevin F. O’Malley, who was the United States Ambassador to Ireland during the Obama-Biden Administration. He is a trial lawyer, law professor, and published author who also served as a federal prosecutor in the United States Department of Justice.

“Northeastern Pennsylvania is written in my heart, but Ireland is written on my soul.”  - Vice President Joseph R. Biden

I write to you about Joe Biden as my friend, my former boss, and my fellow Irish-American who will lead our beloved country further towards its true destiny— a nation of opportunity, compassion, and respect for one another.

When most of our ancestors arrived from poverty, oppression, and deprivation in British-occupied Ireland, all they wanted was a chance. America gave us all the opportunity to work and succeed, our Church taught us to have compassion for each other, and the American law protected our right to prosper.  This was equally true for the Finnegans of Carlingford and the Blewitts of Ballina, Vice President Biden’s ancestors.

In less than five months, we Irish Americans have a clear binary choice on which way our great country should move towards the “more perfect union“ envisioned in our Constitution. I say binary because it is simply Biden versus Trump – third parties and staying home are wasted and lazy acts.

People smarter than I have spoken to the detailed policy positions that Vice President Biden espouses and the reasons for each. I am, however, writing here to testify personally about the character of the man who can rescue us from the current chaos, confusion, and corruption of the Trump administration and find the true soul of America – the nation our ancestors sought out in their hour of despair in Ireland.

Joe Biden is a decent, hard-working, law-abiding, Catholic man who has never forgotten where he came from. There is no “public Joe Biden“ and a secret “private Joe Biden“. The Joe Biden you see during a televised speech or interview is the same Joe Biden I have seen at the breakfast table, riding to a public engagement, or enjoying a few minutes chat at the end of a busy day. He wears his heart on his sleeve and truly, “What you see is what you get."

-What you see is a man who knows how to work with others in order to accomplish big things in Washington — the Violence Against Women Act, the Assault Weapons Ban, and, yes, the Affordable Care Act. To be enacted into law these pieces of legislation, and many others, required the art of listening, learning, and compromise.

-What you see is compassion for those struggling to make our American dream their own reality, just like our ancestors – the immigrants, the working poor, those fighting to join the great American middle class, but being held back by inferior schools, spotty access to decent healthcare, and fair enforcement of our laws.  Compassion, it has been said, is the basis of all morality.

-What you see is a man who respects facts and science and will be guided by both in making the decisions that will affect us in our daily lives.

-What you see is a lifelong public servant who didn’t enter public life to get rich.

-What you see is a man who doesn’t need his ego fed or his desire for revenge satisfied at every turn.

-What you see is a leader who will surround himself with smart and like-minded people who are all pulling in the same direction—a better country with more opportunity for all of us.

-What you see is a  man who quietly lives by the religious beliefs and traditions we hold dear.

(As a relevant aside, I can tell you that when Vice President Biden stayed with us at the Ambassador’s residence in Dublin a few years ago, we went to Mass on Sunday, quietly slipping into the church and, after Mass and Communion, departed without any hoopla. Contrast that to the serial adulterer gassing American citizens peacefully demonstrating against racial injustice in order to have his picture taken in front of a church he doesn’t attend holding someone else’s Bible.)

The Democratic Party, and I suspect we will find in November, the vast majority of Independents and Establishment Republicans have decided to coalesce behind a decent, middle class minded, Irish-American Catholic whom they already know well. Tested, practical, proven, trusted—appealing to the best of the Irish that is in us.