In a massive turnaround for Joe Biden right across the electoral map, it seems the blues are advancing. 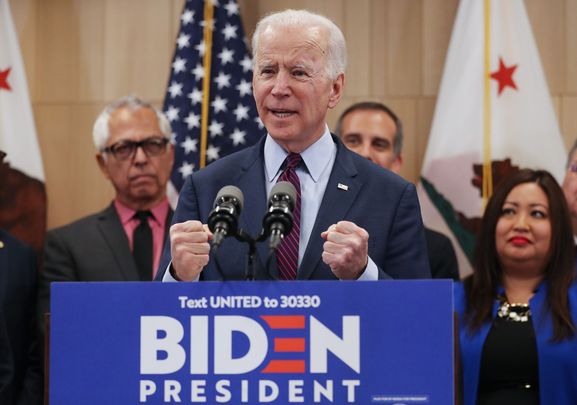 Joe Biden looks set to win the 2020 election but he cannot rest for a minute. Getty

The poll also showed that wannabe Trumper Senator Tom Cotton, who advocated for U.S. military troops on the street, had only a 45 percent approval rating.

If the poll is correct then Arkansas, a desert for Democrats since Bill Clinton the White House in 2000, is incredibly in play.

But Arkansas is not the only red state flowering purple.  A recent slew of Texas polls showed the presidential race dead even with both men in the high 40s.

If Texas were ever to swing blue it would effectively lock Republicans out of power for a generation.  Its 38 electoral college votes added to New York and California, both heavily Democratic, would ensure a blue White House for years.

Then there’s Arizona, a ruby-red state that has gone red in 11 of the last 12 presidential elections. Here we find Joe Biden a little nudge ahead in several recent polls.

The New York Times recently reported Donald Trump has already put up advertising in Iowa, a state he ran away with, in 2016.  A new poll there showed the local Democratic U.S. Senate candidate ahead of the incumbent by three points.

Everywhere on the electoral map it seems the blues are advancing.

What we may be witnessing is a Trump meltdown amid the white heat of the pandemic, the crashing economy and the national street protests about police brutality.

Trump, it seemed until this year, was going to get away with being the least qualified person to ever hold the position of president. In brief, a businessman whose company was bankrupted six times and gained fame as the host of a hokey popular reality show (slogan: “you’re fired”) somehow became president and got away with it for three years.

Read more: America is on the verge of revolutionary racial, political, and economic unrest

Now the polls show him sinking rapidly.  Of course, I know what all my political friends will say -- remember 2016, remember when Hillary Clinton similarly looked home and hosed?

We, Democrats, live in perpetual fear of that scenario repeating in 2020.

But it won’t.  Biden, a likable, old-fashioned Irish pol, competent and experienced, seems to be the perfect opponent.

He does not rile up independents the way Clinton did. He has none of the decades of hostile pounding and misogyny to deal with that she had.

The election is still less than five months away but it hardly seems we will see incredible improvements in the months ahead. Trump is hiding from the pandemic, racially insulting adversaries, and the economy, dragging the weight of the pandemic, seems unlikely to fire up soon.

Yet Biden cannot rest for a second. His own incredible comeback in the Democratic primaries where he went from deadbeat to unbeatable overnight is all the proof he needs.  He went from bow out to blow out in a week.

So I’m predicting another Biden blow out (yes, just a few months after I wrote off Biden’s chances in the primaries).

Politics is a strange game, never stranger than this year of the pandemic. But the warning lights are everywhere for the Trump candidacy.

The tide is turning and Biden has a wet sail.

Read more: In a partisan age, hypocrisy is the one thing we can agree on