Donald Trump's supporters in 2016 could not get on board with Hillary Clinton, but it appears they could be swayed by Joe Biden in 2020. 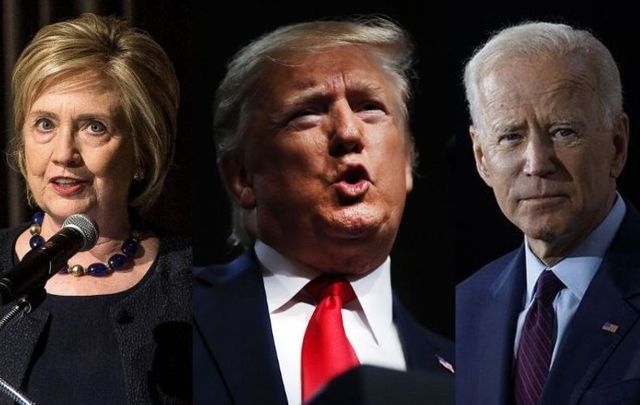 Hillary Clinton was always unacceptable to them, but Joe Biden has a much better shot with Trump’s 2016 voters.

My Democratic views and support for Joe Biden has not stopped a small group of my Irish American friends who are dyed-in-the-wool Trump supporters from remaining friends with me.

Read More: Donald Trump will stop at nothing to win the election

When I interviewed them in 2016, they voted for Trump because of what they termed ‘suffocating political correctness,’ hatred of Hillary Clinton, admiration for what Donald Trump has achieved in his business life, and a deep sense that America was slipping.

Four years later, the ten or so friends feel very strongly that Trump had a raw deal with a ravenous press seeking to devour him. They still admire him today.

But there are serious questions for some of them because of Trump’s continuing erratic behavior, and a desire for him to ‘simmer down’ and stop the crisis-a-day politicking.

On coronavirus, they are not dismayed by Trump’s performance feeling that states and especially China are as much to blame for the dreadful crisis.

On the economy, they don’t blame Trump, noting any American president would have been blindsided by COVID-19.

Read More: Why Biden will win - it's the coronavirus, stupid!

So the million-dollar question is, will they vote for Trump again? Of the ten friends, seven said they would, two said they would vote for Biden, while another was leaning Biden but uncertain.

The three who switched to Biden reminded me that their biggest issue last time was distaste for Clinton more than a love for Trump. The common denominator was Biden is more acceptable.

“A Catholic Irish American president is no bad thing,” said Bob, a wealthy retired Wall Street investor. “Biden has that old-time Irish politician image I always liked. He is far more acceptable than Hillary would ever have been.”

The second pro-Biden friend was equally enticed by Biden’s Irish Catholic roots. Notably, of the group, the more religious you were, the more likely you were to want to vote for Trump.

There is something significant in that. Devout Catholics are among Trump’s core supporters. But less devout are less so. It's also clear to me that among my older Irish American friends, Hillary never had a shot, but Biden certainty does.

Read More: After four years of Trump, are you better off than you were before?

I have a feeling that may be how Biden could win in the end, by eking out a victory among groups that would never have voted for Hillary.

Some conservative Irish Americans would settle for an Irish Catholic in the White House even though they may hold their noses before voting.

Trump, the shrewdest political operator of all, recognized the Biden threat right from the beginning and tried to finish him off with a souped-up Ukranian scandal. Trump got impeached for his trouble.

Interestingly, the successful attacks on Hillary's character, emails, etcetera, may have made the GOP think they could do the same to Biden.

But even the nickname “Sleepy Joe” is far less poisonous than the “lock her up” chants against Clinton.

In the end, the “nice guy” image Biden has accumulated through a lifetime in politics may be what makes him president. Among my small sample of Trump 2016 voters, it certainly does carry some weight as does his Catholicism and working-class roots.

Polls show among voters who can’t stand either Trump or Biden, Biden wins easily if the voters are forced to make a choice.

If he does win, Biden will prove that nice guys don’t have to finish last.