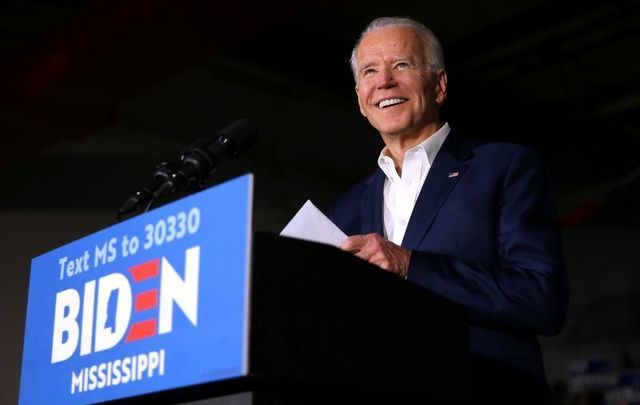 Joe Biden has recommitted to choosing a female running mate for the US presidential election.

Joe Biden, the presumptive Democratic nominee for the 2020 US Presidential Election, denied this week that he will be selecting New York State Governor Andrew Cuomo as a running mate and reiterated that he will be choosing a female.

Biden, who was speaking during a CNN coronavirus Town Hall on April 16 with Anderson Cooper and Dr. Sanjay Gupta, said: “I think Governor Cuomo is capable of being president. I think he's a great guy, but I also think that it's important that there be a woman [on the ticket].

“Not just vice president, but making sure that we have a Supreme Court, we have a cabinet, we have a White House that looks like the country. And I think it really matters.

“I think it’s really important - there’s plenty of qualified people who have the experience and background who are women are ready to be president on day one and I’m just gonna stick with that.”

Joe Biden says he thinks NY Gov. Andrew Cuomo is “capable” of being President but that he still plans to choose a woman as his VP: “There’s plenty of qualified people who have the experience and background who are women who are ready to be President” #CNNTownHall pic.twitter.com/hx7QhLYbFB

Among the females who are rumored to be in consideration for the  VP role are former Georgia Representative Stacey Abrams, Senator Elizabeth Warren, and Senator Kamala Harris, all of whom have in recent days said they would be willing to accept the position.

Abrams told ELLE Magazine this week: “Yes. I would be honored.

“I would be an excellent running mate. I have the capacity to attract voters by motivating typically ignored communities. I have a strong history of executive and management experience in the private, public, and nonprofit sectors. I’ve spent 25 years in independent study of foreign policy. I am ready to help advance an agenda of restoring America’s place in the world. If I am selected, I am prepared and excited to serve.”

In 2018, Biden endorsed Abrams during her gubernatorial run in Georgia:

I am honored to have the endorsement of Vice President @JoeBiden, whose decades of service to our nation has helped shape brighter futures for countless Americans. I look forward to working alongside him to ensure every GA family has the freedom and opportunity to thrive. #gapol pic.twitter.com/fb6bdu2ej6

Senator Elizabeth Warren, who formally endorsed Joe Biden earlier this week, told MSNBC's Rachel Maddow that she would accept the VP role if it were offered: “We both want the same thing, we want this country to work and we want it to work for everyone,” Warren said of Biden.

In this moment of crisis, it’s more important than ever that the next president restores Americans’ faith in good, effective government—and I’ve seen Joe Biden help our nation rebuild. Today, I’m proud to endorse @JoeBiden as President of the United States. pic.twitter.com/VrfBtJvFee

When Maddow asked Warren if would agree to being Biden’s running mate, Warren simply said: “Yes.”

Senator Kamala Harris told MSNBC's Craig Melvin on Thursday that she would be “honored” to serve alongside Biden, but that her main focus right now is the coronavirus crisis.

“Obviously I’m honored if I am being considered,” Harris said. “I think what's most important is that we all join together, that we unify the party, that we unify the country and that we elect Joe Biden because Donald Trump does not know how to do the job, he has failed as a President so obviously in this moment of a national crisis.”

When asked if she would accept the position, Harris said: “Obviously I’d be honored to serve with Joe, but my focus right now is what we’re dealing with right now.”

Who do you think Biden will offer the running mate position to? Let us know in the comments