Democratic frontrunner Joe Biden said that he is considering "six or seven" potential running mates as he looks to wrap up the Democratic nomination. 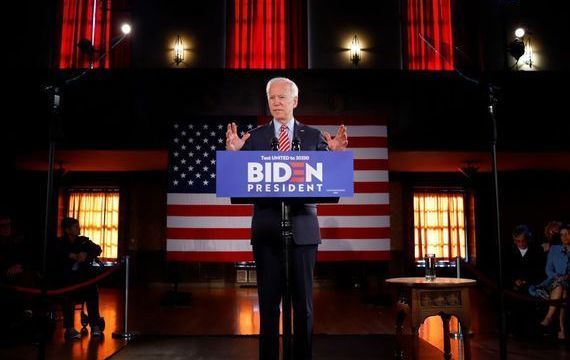 Joe Biden will pick a woman as his running mate if he secures the nomination. Getty

Democratic frontrunner Joe Biden said that he is considering "six or seven" potential running mates as he looks to wrap up the Democratic nomination.

Biden, who has committed to picking a woman as his running mate if he wins the nomination, said that he had discussed the decision with former President Barack Obama and that he needed to begin the vetting process "in a matter of weeks."

The former Vice President was speaking on a call with campaign donors on Sunday.

Biden told campaign donors that any candidate must have sufficient political experience to be able to step into the role of president if he was unable to serve.

If elected, Biden, 77, would be the oldest person in American history to be sworn in as president.

During a town hall in New Hampshire in February, Biden told his supporters that he would take his age into consideration when picking a running mate. He said that he needed to pick someone who would be ready to be president from the day of his inauguration.

"I have to pick someone if, God forbid, tomorrow, if I contracted what my son had or something like that, that the person is ready on day one to be president of the United States," Biden said.

Biden, who leads Bernie Sanders in the Democratic Primary by just over 300 delegates, confirmed in a debate on February 15 that he would pick a woman as his running mate.

He didn't rule out former Democratic candidates Elizabeth Warren, Kamala Harris or Amy Klobuchar as potential running mates but did not indicate that he would pick any of them either.

He did not name any specific candidates to be his running mate but said that the decision would be his and his alone.

"They have to be prepared. Once I pick someone, God willing, if I'm the nominee, that there's not going to be any snafu."

Biden's running mate will have to share fundamental values on a number of policy-related issues, including health, education and US foreign policy, according to the former Vice President.