Of the Irish Brigade, Father Mooney, was one of the most courageous, going everywhere with his troops, giving daily Mass and taking confession. 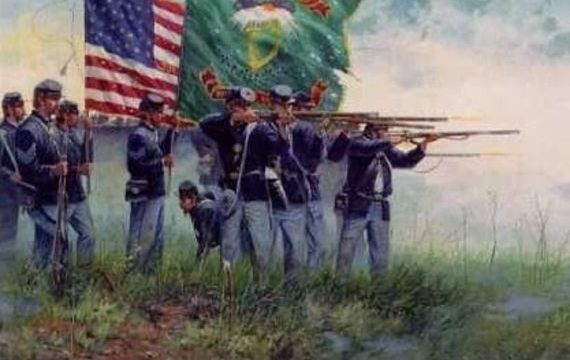 The "Fighting 69th", the Irish Brigade during the American Civil War. YouTube

New York’s St. Brigid’s church, which was built in the late 1840s by Irish immigrants and became famous during the American Civil War, is featured in a new book, "The Book of St. Brigid", written by bestselling author Colm Keane and his wife, former RTÉ newsreader Una O’Hagan.

The book describes how many of its parishioners who served in New York’s 69th Infantry Regiment had one of those spine-tingling moments on the afternoon of April 23, 1861. One thousand of them – led by Sligo-born Colonel Michael Corcoran – had assembled at Great Jones Street, where they were presented with a United States flag by the wife of Galway connected Judge Charles Patrick Daly. Ordered to march at three o’clock, they never anticipated what was about to happen next.

The men of the ‘Fighting 69th,’ as they were called, turned on to Broadway as they headed towards the New York piers and their departure for the Civil War. As they entered Broadway, they were greeted by a tumultuous farewell. The street was crammed with well-wishers. The cheers were deafening. Flags and banners streamed from windows and housetops. Ladies waved their handkerchiefs from balconies and flung bouquets on the marching column.

Soaking up the atmosphere was the regiment’s chaplain, Fr. Thomas Mooney, who was pastor of New York’s recently-built St. Brigid’s church. A Manchester-born immigrant of Irish parentage, he felt at home with his fellow recruits, many of whom were his parishioners. Since 1853, he had been priest-in-charge at St. Brigid’s – a church which, it was said, was ‘worthy of so great a saint.’

Many of Fr. Mooney’s army colleagues and parishioners who marched with him that day had arrived in America having escaped the Great Famine in Ireland. They had names like Duffy, Murphy, Kelly, Butler, O’Boyle, Cahill, and Ryan. Their paymaster was Matthew Kehoe. Two of their assistant surgeons were named Kiernan and Nolan. All of them were part of a military unit that would rightly and understandably be called the ‘Irish Brigade.’ 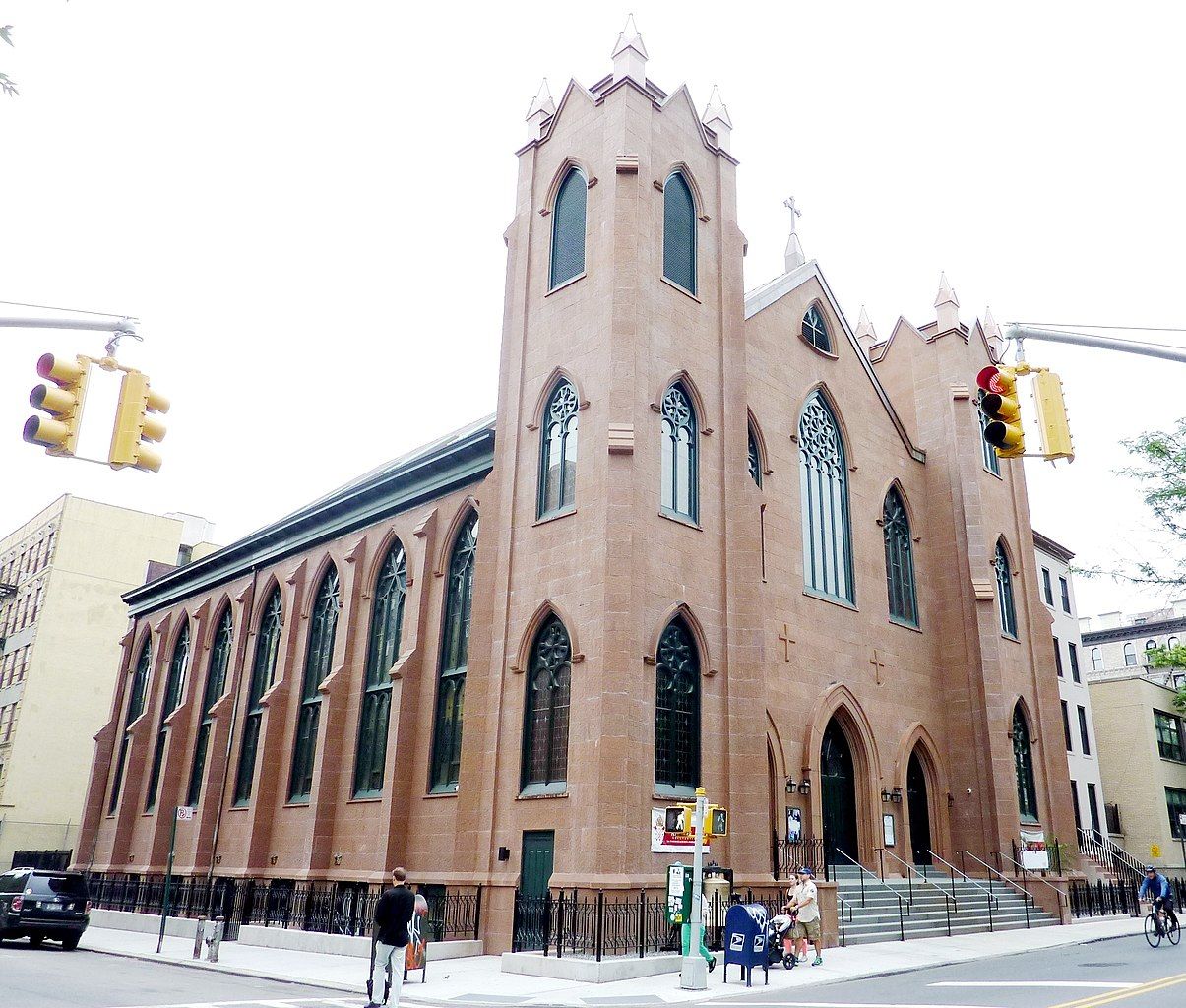 No other Union company suffered more combat deaths than the Irish Brigade during America’s Civil War. Inspired by their battle cry, ‘Faugh a Ballagh’ – an Anglicisation of ‘Fág an Bealach,’ meaning ‘Clear the Way’ – they fearlessly engaged their Confederate counterparts in close, deadly combat. They became known for their courage, ferocity, and toughness in battle, resulting, of course, in disproportionate fatalities.

Few members of the brigade were more courageous than Fr. Mooney. He never lacked energy or spirit and was daring and tenacious. Wherever his fellow recruits went, he went too. He said daily Masses for the troops and heard their Confessions. A kind and considerate man, he also offered counsel to soldiers who faced death on a daily basis.

The men of the 69th loved him. Those who knew him from St. Brigid’s recalled ‘a friend to whom they could always come with confidence,’ as one sketch from the era put it. Many of them were hardened Irish immigrants, who had worked on the New York docks in backbreaking labor. It was their rough hands that had built St. Brigid’s, turning it into a haven for themselves and their families. They knew a trustworthy, sincere man when they met one,

They also recognized and appreciated the priest’s wild Irish streak. On one occasion, he was asked to bless a cannon gun, but he decided to baptize it instead. It was an honor throughout his time as a priest, he jokingly said, ‘to baptize many a fine blue-eyed babe, but never had I brought before me such a quiet, healthy, and promising fellow as the one now before me.’

His boss, Tyrone-born Archbishop John Hughes – known as ‘Dagger John’ for his abrasive personality – wasn’t amused. He immediately sent Mooney a letter: ‘Your inauguration of a ceremony unknown to the Church, viz., the blessing of a cannon was sufficiently bad, but your remarks on that occasion are infinitely worse. Under the circumstances, and for other reasons, I wish you to return, within three days from the receipt of this letter, to your pastoral duties at St. Brigid’s.’

Fr. Mooney was left with no choice. Against the wishes of his comrades, he returned to New York, where a surprise awaited him. Four thousand parishioners turned out to greet him and welcome him home. He was so popular that when the ‘Fighting 69th’ later returned to the city, they asked him to lead their parade. He was only too happy to oblige.

For the next decade and a half, Fr. Mooney attended to his pastoral work at St. Brigid’s.

Then, in 1877, aged 53, he was involved in a dreadful accident. He was thrown from his carriage while driving through Fifth Avenue, the vehicle having hit a heap of stones that had been left unlit and unguarded. Thrown violently against the kerbstone, his skull was fractured. Although there were hopes of a recovery, he died two days later, on September 13, 1877.

His funeral service, which was held at St. Brigid’s, was memorable. Outside the church, an estimated 10,000 people crammed the streets. One hundred policemen struggled to keep them under control. The church itself was packed to capacity. Six bishops and 400 priests sat with his regular parishioners. ‘As the solemn service echoed through the aisles of the mourning church, the sobs of the humble parishioners became uncontrollable,’ one newspaper reported.

The somber occasion was marked by another sound that left an indelible imprint on those in attendance. It was the sad, muffled roll of the drum corps of the ‘Fighting 69th.’ Along with large detachments of the regiment, they had arrived to pay their respects to one of their fallen dead. It was their final tribute – their last tattoo – to a man who had marched with them from St. Brigid’s church in New York to some of the most vicious battlefields of the
American Civil War.

The Book of St. Brigid details other aspects of the saint’s legacy, including stories
surrounding Oliver Cromwell’s daughter Bridget, Maud Gonne MacBride, Lady Gregory and Pirate Queen Grace O’Malley. Also explored are her roles in inspiring the first-tiered wedding cake and Buy Irish campaign, along with her miracles and cures.

* This book "The Book of St. Brigid" is written by Waterford-based Colm Keane and Una O’Hagan. Colm has published 29 books, including eight no.1 bestsellers. Una O’Hagan, a former newscaster, is also a no.1 bestselling author. This is her fourth book. The book is available through all established outlets, including the website www.colmkeane.com.