NYPD hosted a ceremony in honor of Patrolman John P. Flood, a County Cavan-born cop who was beaten to death in the line of duty on July 3, 1917. 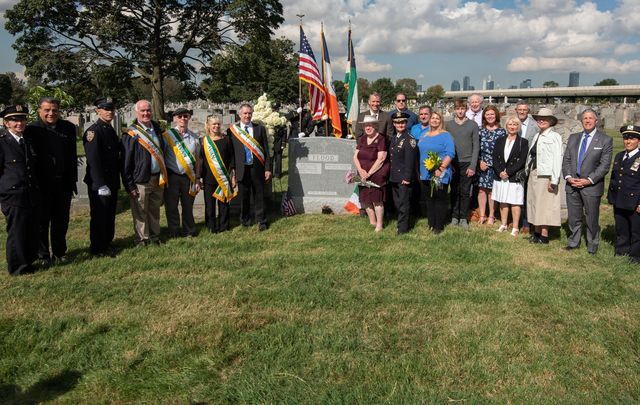 A ceremony at Calvary Cemetery in Woodside, Queens in honor of Patrolman John P. Flood, a County Cavan-born NYPD member who was beaten to death in the line of duty.

An Irish NYPD officer, County Cavan native John P. Flood, was beaten to death on the job back in 1917, but today’s members haven’t forgotten his sacrifice.  A ceremony attended by top NYPD members to dedicate a proper headstone in his honor took place last week in Queens, with Flood’s surviving granddaughter also in attendance.

The New York Police Department never forgets its fallen officers, even if their deaths happened over 100 years ago.

On Monday, September 20, the NYPD hosted a ceremony at Calvary Cemetery in Woodside, Queens in honor of Patrolman John P. Flood, a County Cavan-born NYPD member who was beaten to death in the line of duty on July 3, 1917 at an Upper East Side tenement after defending a woman whose boyfriend, a trained prizefighter, threatened her with death.

Flood was only 37 years old and near the end of his shift when he encountered the fighter’s girlfriend who begged him to intercede on her behalf.  He went to a tenement at 502 East 77th Street and the woman’s boyfriend, a boxer named Milton Bleier, according to a 2018 report in the New York Daily News, was armed with his fists.

Bleier punched Flood, took his nightstick, and proceeded to beat him to a pulp. The Irish officer, a member of what is known today as the 19th Precinct on the Upper East Side, died from his injuries. He left behind his wife Mary and three young children.

Bleier didn’t stick around to face justice.  But the Bronx native was found in Baltimore six months after he absconded and jailed for his heinous crime.

Though Flood was given a proper NYPD funeral at the time, his grieving wife couldn’t afford to pay for a headstone.  There was also a wider family dispute over a pre-arranged burial plot, so the hero cop was laid to rest in an unmarked grave in Calvary where Mary, in 1952, and her mother, Anne Kelly Holland, in 1936, were also eventually buried. 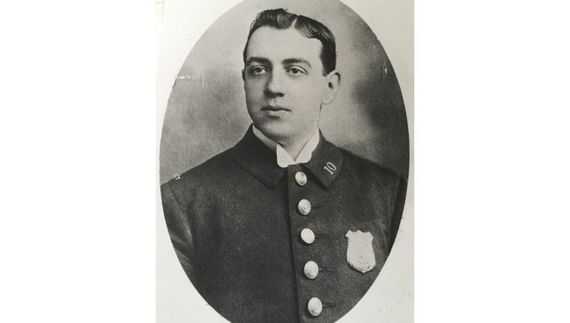 The current day 19th Precinct headquarters on East 67th Street has a wall of honor for the fallen NYPD heroes who sacrificed their lives on the job.  Patrolman Flood’s name is one of seven precinct members who paid the ultimate price.

Police Officer Anthony Nuccio, the precinct’s crime prevention and digital communications officer, organized a re-dedication of the wall back in 2016, the Daily News reported, and Flood’s only surviving close relative, a granddaughter named Maureen O’Grady, was in attendance for the service.

Nuccio expressed interest in visiting Flood’s grave to mark the 100th anniversary of his death the following year, but O’Grady, now in her late 70s, told him the family was never able to afford a headstone.  Flood was the only one of the seven fallen precinct members who didn’t have a proper grave to visit.

“That was just shocking to us,” Nuccio told the Irish Voice this week.  “To think that could happen back then. It would never, ever happen now.”

Nuccio set about correcting that wrong, and in 2018 undertook a fundraising drive to raise $9,000 for a headstone at Calvary for Flood, his wife and mother-in-law.  Nuccio was eventually able to locate the area where the Flood family was laid to rest, and it didn’t take long before he was able to raise funds for the stone.

“We just knew that we couldn’t let Patrolman Flood’s grave go without a proper headstone. I reached out to retired cops, those still on the force…the response was incredible,” said Nuccio, who has stayed in regular contact with O’Grady.

“It was quite a brutal crime scene from the reports I’ve read. Patrolman Flood did what he had to do at the end of his tour, and unfortunately, he paid the ultimate price.”

Nuccio told the Irish Voice that he’s made a graph of the Flood family tree with O’Grady’s assistance.  “I have a whole file about him on my desktop,” he says.

“He was a wonderful man, a well-known cop in the precinct who was also known as being like a parish priest. He was well-spoken, didn’t like hearing curse words.  People looked up to him for guidance.” 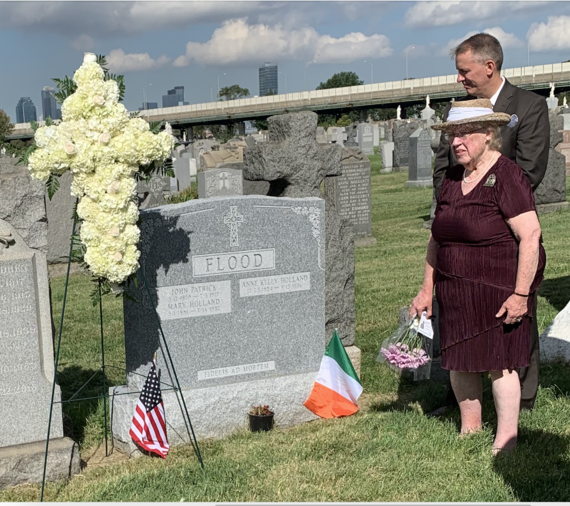 NYPD Commissioner Dermot Shea and Maureen O’Grady at the memorial for Patrolman Flood.

John and Mary Flood had three young children, a boy, and two girls. There are various distant cousins and great-grandchildren still alive; Maureen lives on the East End of Long Island.

The Flood headstone was delivered to the grassy site where Flood was buried two years ago.  It contains inscriptions for himself, his wife, and his mother-in-law.  Finally, on September 20 of this year, a proper blessing and tribute was able to take place.

“Maureen spoke at the ceremony so beautifully and was so honored. She has known about her grandfather her whole life. There was always a photo of him in her home,” says Nuccio, who considers himself an honorary Irishman after learning so much about Patrolman Flood.

Nuccio also singled out his colleague, Auxiliary Deputy Inspector Bridie O’Reilly from Co. Sligo, as being an invaluable source of assistance in the quest to honor Patrolman Flood.

“Bridie is just amazing. She was with me every step of the way. If you know Bridie and she’s your friend, you are a lucky person,” Nuccio said of the former president of the Sligo Association of New York.

Nuccio says it was his honor to lead the charge for a fallen prince of the city who will never be forgotten.

“It’s been an unbelievable experience,” he says. “Maureen is like my grandmother now. She’s part of our NYPD family.”