Taoiseach Micheál Martin met with Irish and Irish American community leaders at the Irish Consulate during his visit to New York City this week. 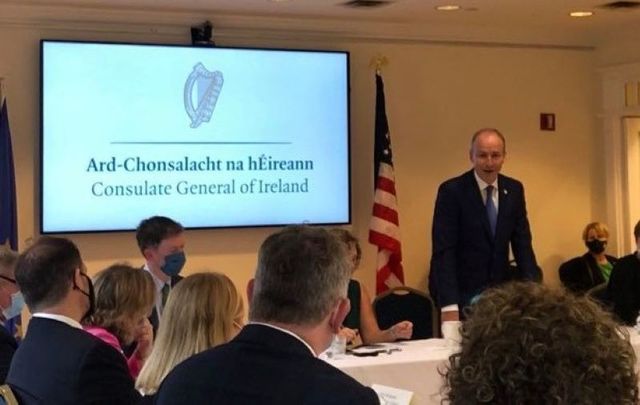 Taoiseach Micheál Martin, in New York City this week amidst the UN General Assembly, took time to meet with Irish American leaders at the Irish Consulate on Thursday afternoon.

Representatives from Irish and Irish American groups in New York - arts, culture, immigration, business, sports - took part in the roughly hour-long panel discussion moderated by new Consul General Helena Nolan where the Taoiseach was able to hear about what the organizations have been working on, as well as their key concerns.

“Your communities represent the heartbeat of the Irish experience in the US,” the Taoiseach told the nearly two dozen representatives in attendance on Thursday.

He added that his engagement with New York Governor Kathy Hochul, whose grandparents were from Co Kerry, illustrated the “deep connections” between Ireland, New York, and the rest of the US.

In his first visit to New York City as Taoiseach, Martin is faced with the unique challenge - or, opportunity - of meeting a diaspora community navigating its way out of the pandemic. He told attendees, “I see this as the beginning of a new chapter,” and added, “the sky is the limit.” 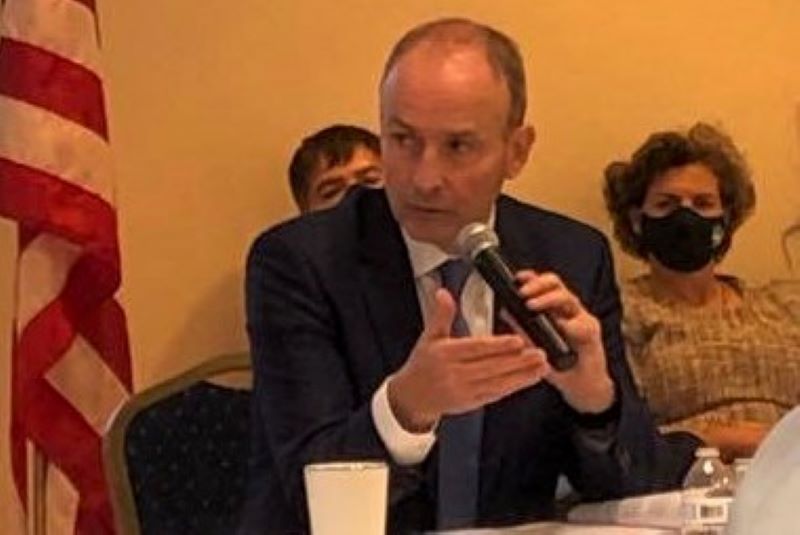 Though facing a "new chapter," one old issue remains - the issue of immigration, both supporting pathways to US citizenship and fostering the next generation of Irish emigrants in the US, which emerged as a deep concern for many of the representatives.

One representative, who helped spearhead the successful Slainte 2020 efforts last year, noted that through collaboration, groups can grow stronger. Much like Thursday’s discussions, Slainte 2020 brought together various Irish and Irish American groups that pooled their resources to help those in need.

“When we work together, we are so much stronger,” this representative said, who added that she would love to see a similar strategy applied to Irish immigration efforts in the US.

"We need a structured, legal migration framework," Martin told attendees, adding, interestingly, that it should be "two ways" to include American immigration to Ireland.

Another representative broached the issue of Irish access to unclaimed E3 visas, a two-year American working visa. Currently, E3 visas are available to Australian nationals, but only roughly half of the 10,500 visas are claimed annually. There is an effort to secure Irish access to the unclaimed visas while allowing Australia to keep its priority access.

In 2018, Irish access to E3 visas was narrowly defeated in the US Senate. The matter was reintroduced in Congress in 2019 by Representative Richard Neal, the head of the Ways and Means Committee who also sits on the Friends of Ireland Caucus, and made its way to the Senate in March 2020.

Speaking with reporters at the Consulate after the panel discussion on Thursday, the Taoiseach disagreed that action on the E3 visa had "gone dormant," and instead revealed that "a lot of work behind the scenes is going on in terms of how we plan the next strategic approach to this"

He did, however, admit that "I think we're going to have to restart that now."

Another representative noted during the discussion that Irish immigration is needed to “continue our heritage here,” and that it is “vital we get an immigration package.”

"The Irish don't have it made in the shade," said one Irish American who has been closely involved with the “30-year hurdle” of Irish immigration in the US. “We’ve got more work to do," he said, adding that “we can’t do it without the same voice.”

Other topics were, of course, discussed on Thursday, highlighting the range of interests and concerns across the Irish American community. Brexit, how to best memorialize the pandemic, how to engage younger Irish and Irish American generations, mental health, as well as the potential of an Irish “birthright” program for Irish Americans were all touched upon over the course of the discussions.

Though emerging from a dark year, Irish America seems vitalized as ever.