Taoiseach Micheál Martin said it was a "privilege" to dedicate the New Irish Arts Center in New York City, which is weeks away from opening. 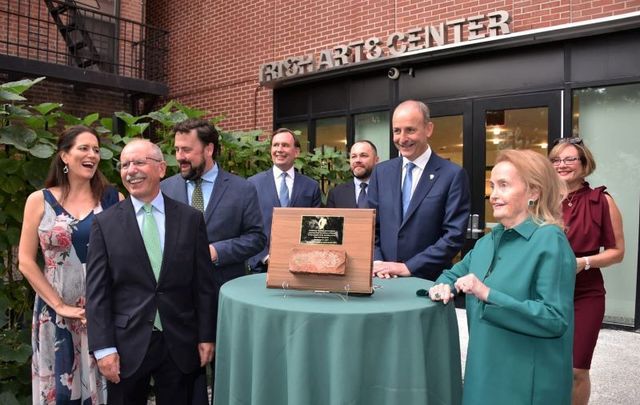 Taoiseach Micheál Martin, who is in New York this week for meetings at the United Nations, stopped by the New Irish Arts Center in the Hell’s Kitchen area of Manhattan to dedicate the building before it formally opens.

The Irish Arts Center (IAC) says it is in the final stages of approvals and preparations to open its new building on 11th Avenue later this year.

Addressing Martin outside of the New Irish Arts Center, IAC Executive Director Aidan Connolly said: "You will see a brick here, Taoiseach, from the original Cybert Tires building. You’ll see the facade that that came from that’s been preserved as part of this new building, which is a manifestation of the old and the new, which is, indeed, what we’re all here to celebrate.

“Hope you’ll enjoy this moment as you visit us in the final weeks before we open.”

It was noted that the brick was from 1916, the same year as Ireland’s Uprising.

The Taoiseach unveils a brick from the old tyre shop that will now house the new Irish Arts Center.

The Taoiseach shared photos from the event on Twitter, noting that it was a “privilege” to dedicate the IAC’s new home:

It’s been a difficult time for the arts, right across the world, but this will be a facility that reaches out to everybody within the community, celebrating creativity, innovation and diversity. pic.twitter.com/xhEOpW7oyr

Ireland's Ambassador to the US Daniel Mulhall said the New Irish Arts Center will be a "brilliant hub for Irish culture in New York."

It was an honour to accompany Taoiseach @MichealMartinTD to the highly impressive new @IrishArtsCenter which will be a brilliant hub for Irish culture in New York for generations to come. pic.twitter.com/OgMyRz6WeU

So proud to celebrate @IrishArtsCenter’s new space in Hell's Kitchen! Their ability to share Irish culture while breathing new life into its history embodies NYC's ongoing immigrant story: building bridges to better understand one another, wherever we're from. Congratulations! 🇮🇪 pic.twitter.com/ooN57XOPys

The New Irish Arts Center will serve as a platform for established and emerging artists, showcasing excellent work and inspiring new collaborations. It will dramatically enhance the IAC's canvas for artistic and educational programming, and provide a welcoming, inclusive setting for the celebration of the excellence and dynamism of Irish arts, unleashing the potential of artists and our growing organization.

Phase One of the project—the new building on 11th Avenue—is fully funded and construction is underway, while Phase Two, which includes the restoration of the adjoining, historic 51st Street building to provide a second venue, and a Growth and Sustainability Fund and Endowment to support future programming and operations, is still being funded.

You can learn more about the Irish Arts Center in New York City here.