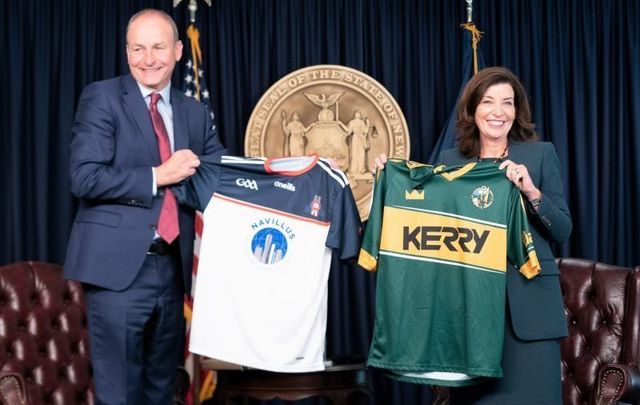 Taoiseach Micheál Martin, who is in New York this week for events at the United Nations, met with New York’s new Governor Kathy Hochul in New York City on Monday afternoon.

Hochul, who was sworn in as the 57th Governor of New York less than a month ago, becoming the first female to hold the role, has roots in Co Kerry through her grandparents who left Ireland to escape “great poverty,” first arriving in Chicago before ending up in upstate New York.

The Taoiseach and the Governor held a joint press briefing on Monday afternoon following a bilateral meeting at the Governor’s office in New York City.

Enjoyed my visit with Governor of New York @GovKathyHochul today.

We shared our experiences in tackling the pandemic, and the importance of connectivity between our two countries.

We also discussed her proud Kerry roots, and her family’s love for the GAA. pic.twitter.com/aYKRDULTAw

Speaking during the press briefing, Governor Hochul joked: “I was very delighted to get to know him [the Taoiseach] - even though he’s a Cork man and I come from Kerry, in a sense, and there’s a little bit of rivalry when it comes to Gaelic football, but for purposes of today, we’re on the same team.”

Hochul said she and Martin "had a great opportunity to talk about issues that unite us, the long history of relations between Ireland and the State of New York.”

She went on to thank the Taoiseach for “extending your hand in friendship and the relationships that we've had preexisting, but that'll even deepen with our knowledge of each other's great history.”

She added: “I have such admiration for the people of Ireland, and to have you as a leader is really significant to all of us."

The Taoiseach said: "I think your story, the story of your grandparents, their journey from Castlegregory to the US, very tough times, is a story of resilience, of perseverance, and it illustrates the enduring connectivity between our two nations. And it's a fabulous story, of progress, of meritocracy, of people really working to get on in life.”

Martin said that the people of Ireland were “thrilled and delighted” when they learned that “a Kerry woman” was to become the first woman Governor of New York.

The Taoiseach said that he and the Governor “compared notes” in relation to COVID and that the two discussed the recent Storm Ida, which “illustrates the issue of climate change and how central that is to our lives now,” an issue that Ireland has been “broaching” for quite some time. 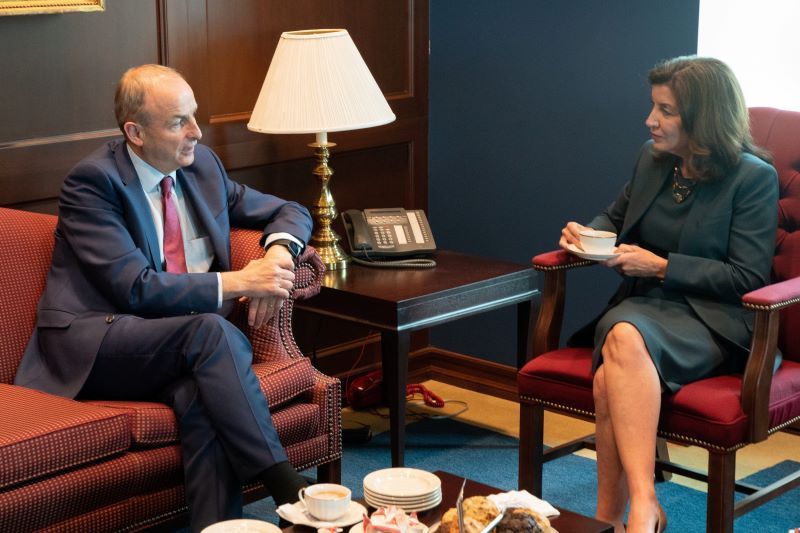 The Taoiseach met with the Governor the same day that US officials announced it would be lifting the longstanding travel ban and moving to a policy where fully vaccinated travelers, including those from Ireland, can enter the US.

“We're also delighted to see that shortly we should be, the travel ban will lift, which I think would give a fillip to Europe, to Ireland and the US relationship,” Martin said, adding, “Connectivity is everything, and it's the lifeblood of our relationship. And I think it reflects the progress we're making in respect of COVID-19.”

“We're looking forward to finding out more details on the lifting of that ban, but I have a feeling that the streets of New York will feel much more vibrant again when we have our international visitors coming here, people who've been vaccinated, which is important to us,” Hochul said, before noting that New York has amongst the lowest infection rates in the nation.

The two leaders then exchanged gifts, with Martin presenting Hochul with a Kerry GAA jersey as well as a book of poetry from Irish poet Eavan Boland, while Hochul offered Martin a New York GAA jersey and a history book of the North American GAA.

“It was very diplomatic of you, Kathy, to give me this one,” the Taoiseach joked when receiving the New York GAA jersey.

“No offense to my friends in County Cork. But that's our New York City team,” Hochul said, “We're very proud of that.”

The Taoiseach noted how the current president of the Gaelic Atheltic Association in Ireland is Larry McCarthy, who is based in New York.

In turn, Hochul explained: “My grandfather was one of the founders of the North American GAA. And again, as I said, my family, the father was a great athlete, and he was scheduled to go play in Ireland as part of the American team. And the week he was supposed to go, his daughter, Kathleen, was born. So he decided it would be better to stay home and be there for the birth of me instead of playing in Ireland. So he missed that opportunity, but I hear about it all the time, all the time.”