Kathy Hochul has today been sworn in as the 57th Governor of New York in the wake of Andrew Cuomo's resignation. 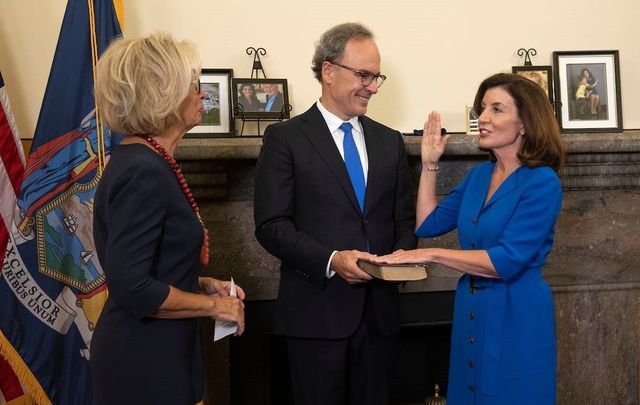 August 24, 2021: Kathy Hochul is sworn in as the 57th Governor of New York. NYS Governor’s Office

Kathy Hochul, whose grandparents hail from Co Kerry in Ireland, has been sworn in as the 57th Governor of New York, becoming the first female to hold the position.

Hochul becomes governor of New York in the wake of Andrew Cuomo’s resignation from the role, which he first announced on August 10, a week after an independent investigation launched by the Attorney General of New York Letitia James found that Cuomo sexually harassed multiple women from 2013 through 2020.

As the Lieutenant Governor of New York, Hochul (nee Courtney) was the next in line of succession. She is also the highest-ranking Irish American elected official in the state of New York.

Honored to be officially sworn in as New York's 57th Governor.

Looking forward to the full swearing-in ceremony with my family later this morning, and addressing the people of New York later today. pic.twitter.com/RUsDtzoW7r

While Hochul was officially sworn in as Governor at 12 am on Tuesday, August 24, a swearing-in ceremony took place 10 am on Tuesday, which you can watch below.

Speaking at the ceremony, Governor Hochul thanked members of her "big Irish Catholic family" for being in attendance.

Later in the day, Hochul delivered her first address as Governor to the people of New York:

Delivering my first address as Governor to the people of New York. Watch: https://t.co/U2iNYfCBKZ

Upon the appointments, Hochul said: “Karen Persichilli Keogh and Elizabeth Fine bring the depth of knowledge, leadership, and experience that it will take to meet the challenges New Yorkers face.

"As Governor, I will assemble a strong team to turn the corner on the pandemic and serve the best interests of New York, whether it's defeating COVID, getting more people vaccinated, or strengthening our economy."

Hochul, a native of Buffalo in upstate New York, became Lieutenant Governor of New York in 2015. Prior to that, she served as the 8th County Clerk of Erie County from 2007 to 2011, and then as a Member of the US House of Representatives from New York's 26th district from 2011 to 2013.

Despite being generationally removed from Ireland, New York's new governor - who was born Kathleen Mary Courtney - has frequently said that her Irish heritage was a key part of her upbringing.

In a St. Patrick's Day message earlier this year, Hochul said: "Just over 100 years ago, my father's parents fled a life that was surely destined for poverty in Co Kerry."

She continued: "I will say like all good Irishmen and Irishwomen, I love a good fight, especially if it's for the people of my beloved state.