WATCH: Irish American promises to “fight like hell” as next Governor of New York

Irish American Kathy Hochul will become the first female Governor of New York in the wake of Andrew Cuomo’s resignation. 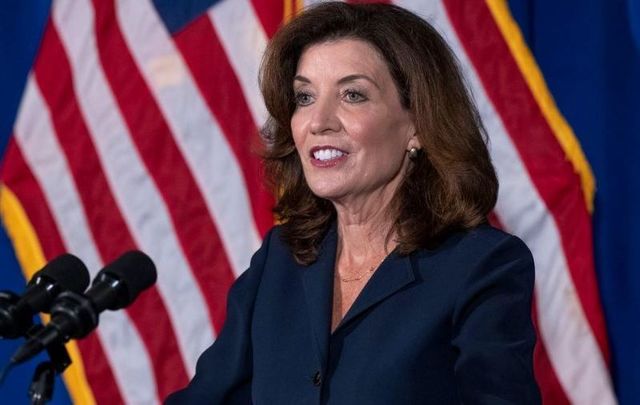 Kathy Hochul, whose grandparents emigrated from Co Kerry to the US roughly a century ago, spoke with the press on Wednesday for the first time since Governor Andrew Cuomo announced his resignation on Tuesday.

As the Lieutenant Governor of New York, Hochul (nee Courtney) is the next in line of succession. She is also the highest-ranking Irish American elected official in the state of New York.

Cuomo is stepping down after an independent investigation confirmed allegations that he had sexually harassed multiple women between 2013 and 2020.

The investigation also found that his Executive Chamber fostered a “toxic” workplace. When asked about that finding, Hochul told reporters on Wednesday that "there will be turnover" and that at the end of her term, "no one will ever describe my administration as a toxic work environment."

After noting that Cuomo has pledged his full support for a smooth transition, Hochul said in her remarks on Wednesday that Cuomo's decision to step down "is appropriate and in the best interest of the State of New York.

“And while it was not expected, it is a day for which I am prepared.”

Hochul, a native of Buffalo in upstate New York, became Lieutenant Governor of New York in 2015. Prior to that, she served as the 8th County Clerk of Erie County from 2007 to 2011, and then as a Member of the US House of Representatives from New York's 26th district from 2011 to 2013.

In her press conference on Wednesday, Hochul said that she has spoken with already local leaders and state elected officials and that she looks forward to working "with each and every one of  them and all of you to build on the progress that we've already started."

While continuing meetings and building her senior staff over the upcoming days of transition, Hochul said she will "do what I’ve always done. I will travel the state to meet New Yorkers, to listen to them, to assure them that I’ve got their backs. And I will take their concerns and bring them back to our State Capitol, and work with our partners in every level of government to come to solutions.

"People will soon learn that my style is to listen first, then take decisive action.

“So in 13 days, I will officially become the 57th Governor of the State of New York. And shortly thereafter, I look forward to delivering an address to all New Yorkers to lay out my vision for the great State of New York.

“But make no mistake, our work has already begun, and I know this year and a half has been so challenging for families and businesses across our state. And sometimes it doesn’t feel like it’s getting easier.”

Hochul cited concerns about the “raging” Delta variant amidst the return to school and work for New Yorkers.

“But I know New Yorkers. They are hardwired to persevere and to prevail.

“And the promise I make to all New Yorkers, right here and right now, I will fight like hell for you every single day, like I’ve always done and always will.”

Despite being generationally removed from Ireland, Kathy Hochul - who was born Kathleen Mary Courtney - has frequently said that her Irish heritage was a key part of her upbringing.

Her grandparents, who met in Chicago after leaving the same area of Co Kerry, later settled in upstate New York where they helped found the still active Buffalo Irish Center.

She further said in the video, a bit of a foreshadowing for her sentiments on Wednesday: "I will say like all good Irishmen and Irishwomen, I love a good fight, especially if it's for the people of my beloved state.