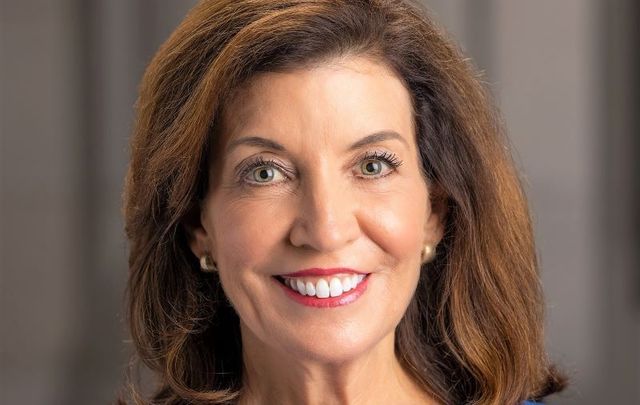 Kathy Courtney Hochul, the new Governor of New York, is the highest elected Irish American woman politician in history now that she’s taken over from the disgraced Andrew Cuomo.

In addition, of course, she is New York’s first female governor since the state was constituted in 1777. Think about that.

Hochul also has a back story that seems hardly believable, starting out life in very real poverty. But she overcame all that and has always stayed close to the Irish roots and identity that shaped her.

Life did not start out wealthy and privileged in 1958 for Buffalo-born Kathleen Courtney. As New York Daily News reporter Tim Balk wrote, “When Kathy Courtney Hochul was born in the summer of 1958, her parents Jack and Pat Courtney had only recently moved out of a 250 square foot mobile home rooted at a trailer park in the shadow of the Bethlehem Steel plant.” The trailer park was named Shamrock Park in recognition of the huge Irish settlement in South Buffalo.

A near neighbor and another famous child of South Buffalo was the late Meet the Press host Tim Russert, who knew Hochul from childhood and befriended her again when she came to Washington as a member of the House of Representatives. In interviews, Hochul often mentions Russert and says he and she made much of the lessons and core values they learned growing up in South Buffalo, one of the great working-class Irish neighborhoods in America.

South Buffalo Irish are tough. When the Erie Canal was being built starting in 1817 from Albany to Buffalo they flooded into Buffalo from Irish cities on the East Coast. They were paid $1.87 a day and somehow survived bitter winters, terrible camp conditions, and waves of illnesses such as cholera.

Then came the Irish Famine and South Buffalo became home to over 10,000 Irish fleeing the worst disaster in Europe in centuries.

One of the strangest incidents in Irish American history happened in Buffalo when thousands of Irish gathered after the American Civil War in 1866 to attack Canada, a British possession, seeking to conquer it and swap Ireland for Canada with the British. It was an audacious plan, to say the least. Many of the Irish gathered were from the city’s Irish First Ward. The plan to capture Canada failed, but as in other cities, the Irish soon saw politics as the way to gain power.

By 1841, the Buffalo Irish had elected their first mayor, Isaac Harrington, and they built their first church, St.Patrick’s, at Ellicott and Broadway.

Generations later, Hochul’s grandparents, both from the same town in Co Kerry, met in Chicago and settled in Buffalo where they soon became key figures in the Irish community there, helping create the Buffalo Irish Center, the hub of all activities. She vividly remembers the pictures of JFK and Pope John on their wall.

Money was scarce as she grew up, and the family was aware that the trailer Park life could happen to them again. But despite a frugal life, Hochul proved to be very ambitious and focused, say friends and family members. She babysat neighbor’s kids, looked after her younger brothers, worked in a local pizza store, and took on extra classes at school.

She worked hard outside of school, too. Hochul’s sister remembers her coming home around midnight after the pizza parlor shift and cracking open her schoolbooks. “I remember being in bed, and looking over, and she’d get home from the pizzeria,” her sister Sheila, 57, said. “And she’d have her light on, and she’d be studying.”

As the Daily News noted, “Money was tight for the Courtney clan. They shopped at the used clothing store, and their brick home at 202 Long Avenue was cramped, with six kids, two parents, and assorted pets.”

Hochul has retained her modest sense of self from her working-class origins and has rare political insight, say fellow politicians. Tom Quatroche, 51, a board member with her on the town council of Hamburg from 1994 to 2010, described her as “unbelievably pleasant,” and said, wherever she goes, she’ll carry Hamburg with her.

“She never forgets where she came from, that’s for sure,” said Randy Hoak, who used to work with Hochul in the town of Hamburg.

Hochul will bring change to Albany. The greatest hope is that she can end the hostility and dysfunction that has marked the Cuomo years. Given how she smiled through her own adversity that could well happen. A unique piece of history has been made this week and Irish America can be very proud of one of its own.

*This column first appeared in the August 25 edition of the Irish Voice newspaper, sister publication to IrishCentral.