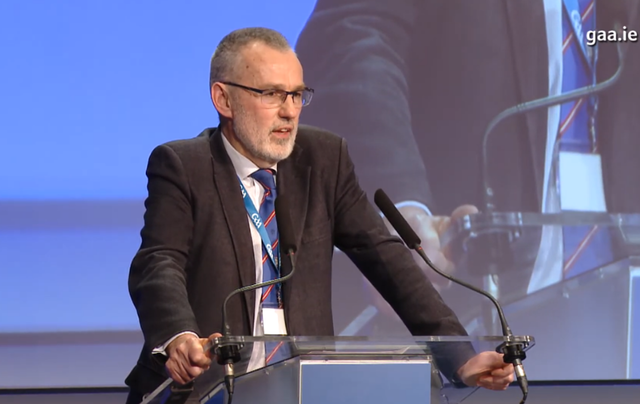 Larry McCarthy became the 40th President of the GAA on Saturday. GAA YouTube

McCarthy succeeded outgoing President John Horan and became the 40th President of the GAA at Saturday's Congress and arrived in Dublin on Thursday morning before assuming the role.

New York GAA said in a tweet on Friday that the GAA community in New York is "extremely proud" of McCarthy, who became the first President to be elected from an association outside of Ireland.

Best of luck to our own Gael Larry McCarthy, who tomorrow is set to become the 40th President of the GAA. Everyone in New York is extremely proud of you and we wish you every success in the role - we know you’ll be brilliant.
New York’s loss is Ireland’s gain.
Ádh Mór Larry 🇺🇸🇮🇪 pic.twitter.com/I1I6G74f5V

The incoming GAA President told RTÉ's Marty Morrissey on Saturday that his main objective is to get teams back on the pitch again. GAA competitions are currently suspended due to Ireland's public health restrictions and McCarthy said that he hopes that competitive action will resume quickly and that crowds will return to stadiums in the future.

"Getting the clubs back up and operating in their communities is the main priority. Everything else will flow from that. Our business model is predicated on attendance. As soon as we have attendance back, we'll be able to generate some income," McCarthy said on Saturday.

McCarthy is currently isolating following his arrival in Ireland and received the second dose of the COVID-19 vaccine before leaving New Jersey on Wednesday.

He told the Irish Examiner that he was due to arrive in Ireland earlier this year to prepare for his role but that he decided to postpone his trip when his first vaccination was scheduled for early February.

His wife Barbara, who booked his vaccination appointment, was already in Ireland by the time he got his second dose of the vaccine.

"Barbara had registered us for the vaccine, and my appointment was at the start of the month," McCarthy told the Irish Examiner.

"But I was faced with the question — do I come back to Ireland or do I stay and get it, what the hell do I do? Barbara is in Ireland so I stayed and I got the second jab this [Wednesday] morning."

Larry and Barbara McCarthy, who are both originally from Ireland, have purchased a property in Dublin where they will live for the duration of McCarthy's three-year stint as Uachtarán.