In a sign of sure progress, The Irish Arts Center in New York City received its Temporary Certificate of Occupancy on March 17, St. Patrick's Day. 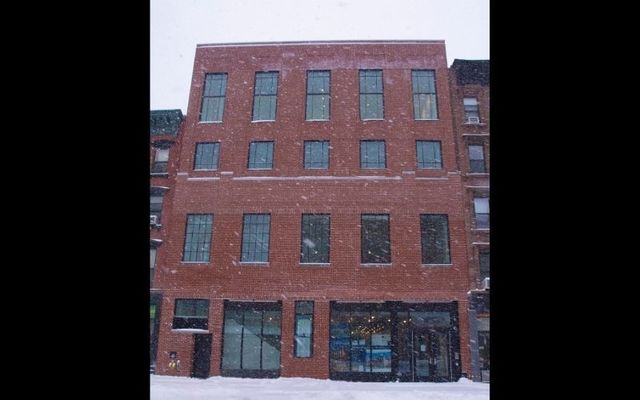 The front of the new Irish Arts Center. Paul Keating.

If the news had arrived on a day other than March 17, it would not have been as dramatic for the good folks at the Irish Arts Center on Manhattan’s West Side in the neighborhood that is far removed from its Hell’s Kitchen days.

The City of New York presented a temporary certificate of occupancy for its new home at 726 11th Avenue which now begins the months-long transition ahead from the venerable premises around the corner at 553 West 51st Street first opened to the IAC in 1974. Providing yet another glimmer of light for the august multi-disciplinary Irish cultural center, it comes after an incredible and challenging year due to Covid-19 and the universal shutdown it engendered.

The TCO, as it is called, arrived just as spring emerged, a time for planting seeds and sprouting blooms, and for the IAC staff the time frame to get inside the new building and work on the extensive punch list of preparations to ready the state of the art facility for its long-awaited opening later in the fall. That is if all things stay on course with light ahead of the pandemic tunnel.

It seemed an opportune time to pay a visit to the IAC and tour the new facility with the proud and highly motivated Executive Director Aidan Connolly last week after an 18-month hiatus since I last toured the former Cybert Tire Store when President Michael D. Higgins was in town.

The twin sense of wonderment and potential at the new site filled me as we walked up and down and around the entire premises as Connolly gushed with excitement how every space could be utilized in multiple formats and purposes, all enhancing the mission of the 49-year-old Irish Arts Center.

We spent the most time in the new theater space, soon to be the centerpiece of performance activity in the new building achieved after an intense, long fundraising campaign that yielded over $65 million.

That steadfast campaign supported by the governments of Ireland, New York City and state, loyal and generous private philanthropists, foundations and a cleverly cultivated audience drawn to its contemporary approach to programming the Irish arts allowed for no expense to be spared in kitting out the facilities for eventual maximum performance values. 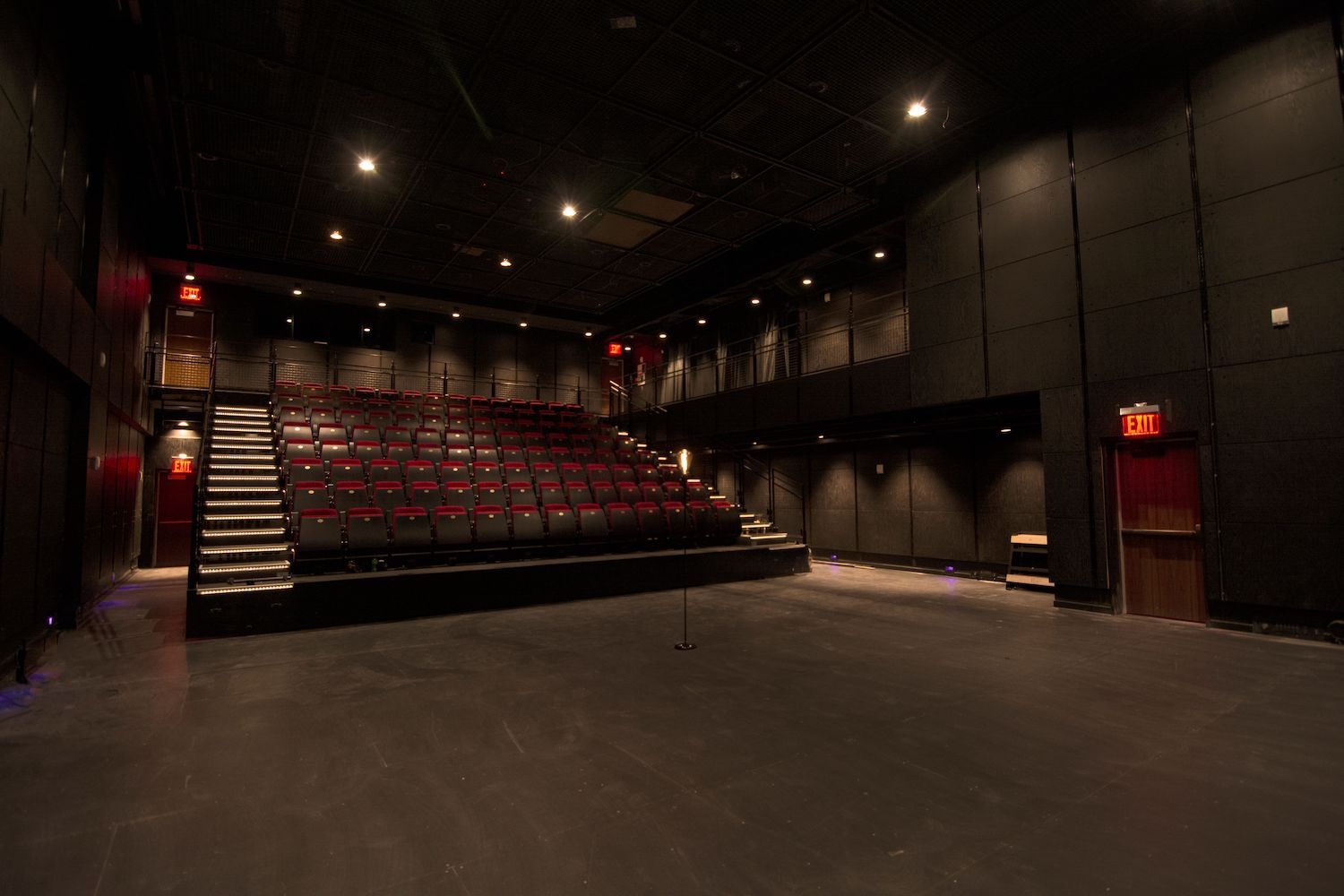 The new theater will be a very flexible and larger than expected rectangular space that presents itself as a large black box until the magical addition of lighting and sound fill the space to enrich the wide array of programming the IAC is known for.

A retractable grandstand made in Belgium will allow for comfortable seating for up to 199 people, leaving a still sizeable stage and retaining the intimate charm of the much smaller Donaghy Theater next door.

The street-level lobby is accessible from both 51st Street and the main entrance on 11th Avenue. It provides another flex space with white walls suitable for exhibitions and a bar offering service for special events held there.

There is also a mirrored dance classroom which can serve as meeting space or lectures or small receptions which also applies to the library space upstairs, with tall windows looking out on 11th Avenue and over to the Hudson River.  No doubt all these long-sought-after rooms will be bubbling with activity in the not too distant future.

Equally impressive as that march to the future opening of the Irish Arts Center is how the innovative staff has spent the last year.  Deliberate and thoughtful in the new building’s planning, even in trial and error mode, they navigated the pandemic year in the usual virtual yet imaginative mode that produced some astounding results.

According to the spring brochure just released, there were 125 digital projects presented that captured audiences totaling 200,000 people in 116 countries as the legacy of the IAC that was forged in years prior burst beyond the geographical confines of Manhattan’s rapidly gentrifying West Side.

Their back catalog of programming and active roster of artists across the multi-disciplinary spectrum helped provide valuable programming that could now be viewed by a wider audience through their “Live from the Irish Arts Center Encore” series which also saw the contributing artists receiving a much-appreciated fee.

Likewise, new programs were commissioned called “Irish Arts Center at Home” for virtual viewing and presentation worldwide. And these were provided for free in these pandemic times which helped swell the viewing numbers, but also very importantly bolstered connections in the Irish arts community offering hope and encouragement to those trapped in the restrictive climes all around us.

The experience gained in these digital experiments suggests a sustainability for a future role in IAC programming, augmenting their live and in-person presentations Connolly encouragingly predicted.

Moving to a virtual environment for classes in Irish music and dance which goes back to its earliest days as a community resource and entrance ramp (including for your humble correspondent as both a student and teacher) to the IAC was an early decision for the spring 2020 semester last year in April.

It proved to be a successful and very workable transition for teachers and students that even allowed for a new summer course for the first time and steady growth that produced the largest student registration ever this past winter. The 140 classes offered online which were tuition-based and hence a much-needed revenue source was amply subscribed to worldwide bringing down barriers to only in-person instruction which may also be a workable asset going forward.

Of special note at the IAC was the initiation of its “Grásta” series of 26 artistic commissions launched last fall to encourage new work and support individual artists in a time of need or uncertainty.

Indeed, the positive impact of its theme, “Grace in Uncertainty,” sends an important signal to the Irish Arts community that we need creativity to keep our spirits buoyed for the time being.

Joanie Madden with Cherish the Ladies produced a new tune called “Spanish Point” while on lockdown in Clare last year that was featured March 2. Aoife O’Donovan premiered her new song “Trans-Atlantic” on March 17 reflecting her own ties across the Atlantic.

Without diminishing the hard work of the long IAC campaign for their new edifice and especially the unanticipated challenges of the past year with Covid, Connolly continually trumpets the assets the center has assembled.

The eco-system or coalition of the IAC board, its resourceful staff, artists, and audiences helped bring $2 million in new funding at their last gala in December, a remarkable achievement with 1,700 contributors who watched the online version.

That unwavering support by the Irish community near and far bodes well for huge success for the new brick and mortar home on 11th Avenue and its outreach via the internet as one of the leading Irish cultural resources to be found anywhere.