One of Co. Kerry’s finest exports ever, a 95-year-old shining star who brightens the lives of all around her and astounds with her limitless energy.  Her proud niece pays tribute as she just marked another year. 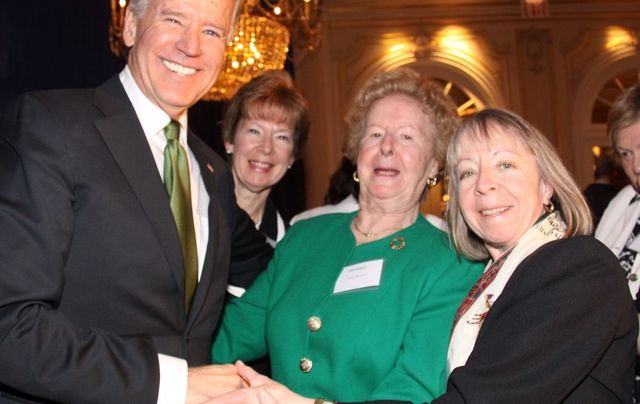 “When are you going to write about me and Joe Biden?” This is a question -- rest assured, it’s not one with a salacious answer -- I get on a regular basis from my amazing Aunt Nora, a mighty Co. Kerry woman who turned 95 on Saturday, March 27, and, in fairness, has a couple of more stories to share about our new president than the vast majority of us will ever have.

In 2013, she met Biden at the annual Hall of Fame celebration hosted by our sister publication Irish America magazine.  He was the main honoree, serving as vice president at the time, and was only too happy to meet with guests on the rope line after his speech.

No way was Nora leaving the venue without getting a photo with one of her favorite guys, and with her bright green blazer and sweet Irish face she must have stuck out because the very Irish veep made a beeline for her.   They had a great little chat about the old country and, as she does with so many people she meets, she invited him to her Long Island home for some dinner if he was ever in her neck of the woods.

That he was a powerful vice president in a historic Obama administration didn’t matter one bit to her.  “He probably comes to New York occasionally so get his number for me,” she demanded.

Fast forward to December of that year.  My husband Niall was invited to one of the vice president’s holiday parties at his official residence and secured invites for myself, our daughter Alana and Nora’s daughter Peggy.

It was an unforgettable occasion in a beautiful, festive home located in the grounds of the U.S. Naval Observatory.  Peggy showed the veep some photos of himself and Nora from the March party, telling him how thrilled her mother was to meet him and anytime he could pop by for dinner, well, he’d be more than welcome!

“So, where is she tonight? She’s not here? Get her on the phone!” Biden said.

Thirty seconds later, the vice president was on the line to Nora’s house.  She answered, thankfully, but when he said, “Hi Nora, it’s Joe Biden,” she wasn’t having it. 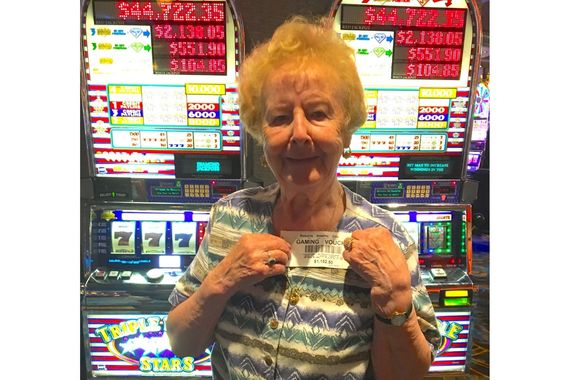 It took a few seconds to convince Nora that we weren’t pranking her, and that the real Joe Biden wanted to wish her good tidings.  The dinner invite never quite came to fruition, but it’s a standing one for our president who she loves.

And though she’s 95 years young she can still cook like a seasoned chef (soda bread being her specialty – nine loaves at a time), play cards like a shark, handily down a daily Dewar’s (or two…), obsess about shows like Judge Judy and, most of all, make her family and many friends feel incredibly fortunate to have her in our lives.

Aunt Nora – her surviving nieces and nephews in Ireland and the U.K. call her Auntie Esther – is a force of nature who makes an indelible impression on everyone she encounters.

“How is she able to fly on a plane by herself to Ireland for a week just to play late night cards in a pub and drink scotch?”

“She’s so sharp and strong – what’s her secret?”

Those are some of the questions we hear all the time from people who meet her.  Esther’s six siblings who she grew up with in Goulane, Rathmore, Co. Kerry have long passed -- the youngest, Danny, when he was little more than a baby ravaged by cough, and the elders who scattered to Dublin, England and America, no older than 80-ish. 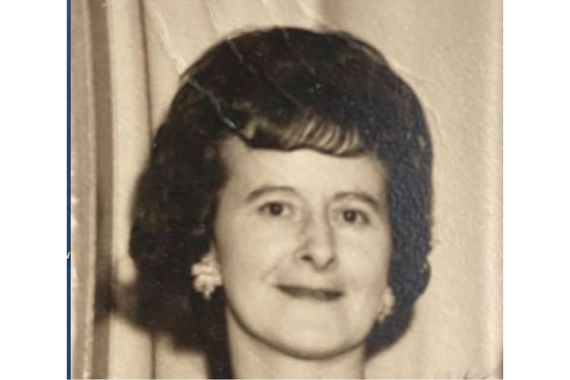 So Nora Murphy – born Nora Esther Ryan on March 27, 1926, in a barn across the lane from the family home which still stands, just about – is our outlier, and for that we thank our lucky stars every day.

Her emigration story isn’t unusual, and yet it’s illustrative of how the Irish made their mark in America and planted lasting roots, particularly in New York.

Though Esther was the youngest of the seven Goulane Ryans she was the first to sail across the Atlantic.  Her Uncle Danny owned a bar in the Bronx back in the day when just about every other storefront in the borough was Irish.

Esther was 16 in 1942 when she left Goulane for the first time to work as a manageress at the P. & J. Ryan grocer in Tipperary Town.  My mother, her elder sister Peg who was working at a P. & J. store in Charleville, Co. Cork, secured the job for her.  Esther liked her freedom and had lots of friends in Tipp but one day, when they went to the cinema to watch a movie about America she quickly became hooked on what she saw.

“I wrote to Uncle Danny and told him I’d like to come, and he said he would send my fare,” Esther remembers.

She set sail for America in 1949, at 23 years of age.  Peg and their favorite first cousin Nell Ryan transported her to Cobh, Co. Cork to catch the SS Washington liner bound for New York.

How they got there, Esther doesn’t quite remember.  I asked if the transport was courtesy of my mother’s then beau Tommy Johnson, a Protestant from the north of Ireland who was wealthy, owned a nice car – a rarity at the time – and loved Peg Ryan dearly, though Rathmore and its people considered their union a scandal because Tommy wasn’t Catholic.

Tommy was well liked but part of the wrong tribe, Esther sadly recalled.  Indeed, my mother and her broken heart left Ireland for New York in 1951 because of the forced break-up of her romance with Tommy, a shock to her system which would be unthinkable in our day and age.

Esther was sad to leave Goulane – “my mother said I’d only be in America for two years and I thought that would be right” –but she remembers having the time of her life on the big liner, “dancing every night,” and eventually settling into a new routine in America.

She lived for a few months with Uncle Danny, who changed her name from Esther to her proper given name, Nora, and got her a job at a Blue Cross Blue Shield office in Manhattan.   It wasn’t unusual for her to spend warm weekends at the Irish Riviera, the Rockaways in Queens – though she was petrified of the ocean – and on one of those occasions she and a friend from Kerry were chatted up by a young, fine looking NYPD cop in uniform.

Danny Murphy’s parents were immigrants from Cobh, Co. Cork.  Nora’s friend took a shine to him, but he seemed to prefer Nora.  “I didn’t mind, I told my friend she could have him,” Nora laughs.

But that didn’t happen, and six months later, in November of 1950, Nora Ryan and Danny Murphy became husband and wife.  Three kids followed in quick succession – Peggy, Paddy and Patricia, known as Tree – as did a move to a Cape Cod-style home in Mineola, Long Island where Nora resides to this day.

My mother’s first port of call when she arrived from Kerry was straight to her sister’s where she lived for many months, working at a local store and helping to take care of the kids before marrying Jimmy McGoldrick from Co. Sligo in 1964 and setting up a home of her own – the first one just a 10 minute walk away from her sister’s.

And those are the beginnings of our extremely tight family unit – Nora and Dan and their three kids, Peggy and Jimmy and myself and my brother Marty. Sunday nights were sacrosanct for Irish card games between the adults.  We celebrated every single occasion together, laughed together and definitely cried sometimes too -- life was good but not always easy -- but no matter what Nora was always the cool, unflappable one, the life of the party, ready for an adventure no matter what.

You can take the girl out of Ireland, but Ireland never, ever left Nora.  Her trips home when her kids were young were very few and far between, but that changed for the better in the 1980s.

We started taking extended vacations to Ireland every other summer and stayed in a rented house in Kerry for weeks where cards would be played at all hours and late night dance seisiuns were the norm. It was Nora, Tree and myself on those first trips “back home” to spend time with the family, and they were game changers for me.  The vacations solidified my love for all things Irish, and I soon realized that as I grew older, I wanted to incorporate Ireland into my life in a substantial way.

Would that have happened if Nora hadn’t told her sister Peg back in 1981 that she was bringing me to Ireland for a few weeks?  Not a chance.  My mother never forgot where she came from but her memories weren’t as fond as Nora’s – probably because of the break-up of her romance with Tommy – and she was quite happy to stay put in New York.

But not Nora.  Trips back and forth to Ireland have been commonplace ever since for her, highlights of her year that she spends months planning and anticipating.

Her husband Dan passed away in 1998 – she and Tree, who never married, cared for him at home – and life eventually carried on, with marriages, births and deaths, good times and sad times like we all experience.

Throughout it all Nora, with a brogue as thick as the day she left Kerry, seemed to get younger as the years unfolded.  She’s the last of her siblings but Ireland still holds such joy for her, as do her card playing friends and relatives who remain.

And joy is something she could sorely use these days.  Tree, unfortunately, had multiple health issues for many decades and passed away at the start of this year, on January 4 at the age of 66.  It was a terrible blow for all of us, but for Nora it was a hammer.  She and Tree lived together forever, were best friends and two peas in a pod.

So my strong, beautiful, resilient aunt cries a lot these days, and that breaks our hearts.  Having your life upended at 95 is really, really hard.  No matter the age, a parent should never have to bury a child.

But Nora is tough. She’s healthy.  She has loads of wonderful friends and an adoring family.  We make sure she’s practically never alone and has things to look forward to.
Like a trip to Atlantic City in April.  (AC rates a strong second on her list of favorite places to go.)  And Ireland, naturally.  The restrictions over there can’t end fast enough.  Once they do we’ll be on a plane.

Nora swears it’ll be her last trip, but she’s been saying that for years now.  She’ll be home for about a week when I’ll get the usual call: “When are we going again?”
And then we’ll make plans.  Happily.  It’s impossible to say no to Nora, an Irish American treasure – emphasis on Irish – who might be 95 but knows more than anyone about staying young and being the life of the party.

And for that and many other reasons too, we are so, so grateful for her.  Happy Birthday Esther!!