Taoiseach Micheál Martin laid flowers on the names of the six Irish-born victims who were killed in the 9/11 terrorist attacks carried out 20 years ago this month. 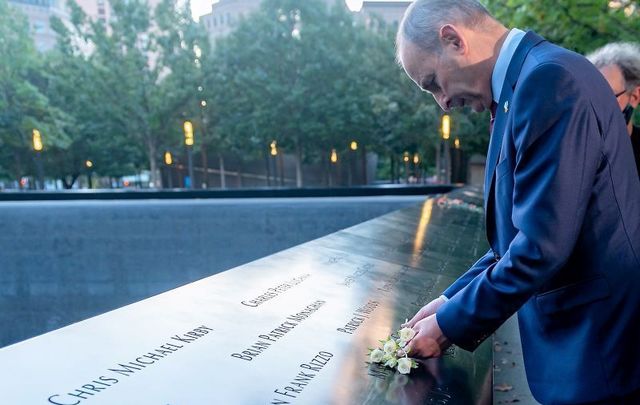 Taoiseach (Prime Minister of Ireland) Micheál Martin visited the 9/11 Memorial in New York City on Monday during his five-day visit to the US.

Martin paid his respects and walked around the north and south pools of the 9/11 Memorial site in Manhattan, where each of the nearly 3,000 victims' names killed in New York, Washington DC, and Pennsylvania are inscribed.

The Taoiseach laid white roses on the names of the six Irish-born victims who were killed in the attacks carried out 20 years ago this month.

Moving visit to the 9/11 Memorial in New York last night, to leave flowers and read the names of the Irish people, and all those, who lost their lives 20 years ago.#September11 #NeverForget pic.twitter.com/m0NqzpyJuT

Amongst the Irish victims of the terrorist attack is Jeremy Caz Carrington (34) from Downpatrick. He lived in Brooklyn with his wife Patricia and worked in the North Tower as a trader for Cantor Fitzgerald.

Joanne Mary Cregan (32) was born in Dublin and moved to New York with her sister when they were both young adults. They lived in the same Brooklyn building and both worked in the World Trade Center. On September 11, Joanne's sister was evacuated from the South Tower, but Joanne was trapped in her office on the North Tower's 105th floor.

Patrick Joseph Currivan (52) from Dublin was a vice president of French firm Atos Euronet and was a passenger on one of the hijacked planes that were used to attack the World Trade Centre.

Sligo native Kieran Joseph Gorman (35) lived in Yonkers with his wife Anne and their two young sons. The couple was expecting a third child. Gorman was a mason tender and was working on a renovation project on the South Tower’s 95th floor on the day of the attack.

Ruth Magdaline McCourt (45) was born in Cork and lived in Connecticut with her husband David and their young daughter Juliana. Ruth and Juliana were on United Airlines Flight 175 which was crashed into the South Tower. They had been going to California where Ruth had planned to meet a friend, Paige Farley-Hackel, who was abroad Flight 11.

Martin John Coughlan (53) from Tipperary moved to America in 1987 with his wife and their four daughters. He was working as a carpenter in the South Tower when the attack took place.

Taoiseach Micheál Martin arriving at the 9/11 memorial shortly to pay tribute to some of the Irish people lost in the terrorist attack 20 years ago this month pic.twitter.com/qpTL3LUWwX

Martin also paused at the 'Survivor Tree', a pear tree that was discovered in the ruins of the attack, nursed back to health, and placed at the Memorial in 2010.

The Taoiseach @MichealMartinTD is visiting the 9/11 Memorial in New York. @rtenews pic.twitter.com/YNpPHWXGw1

Earlier in the day on Monday, the Taoiseach held a bilateral meeting with New York Governor Kathy Hochul, whose grandparents hail from Co Kerry.

The Taoiseach is in New York for a five-day visit. On Thursday, he will chair of a meeting of the UN Security Council, and on Friday, he is due to deliver an address to the United Nations General Assembly.