Remember the name Senator Tom Cotton from Arkansas and take note if he ever runs for president, which he intends to do some day. He should be remembered especially by the Irish in Pennsylvania and the Midwest states where presidential elections are won and lost. He did the Irish down for no real reason. 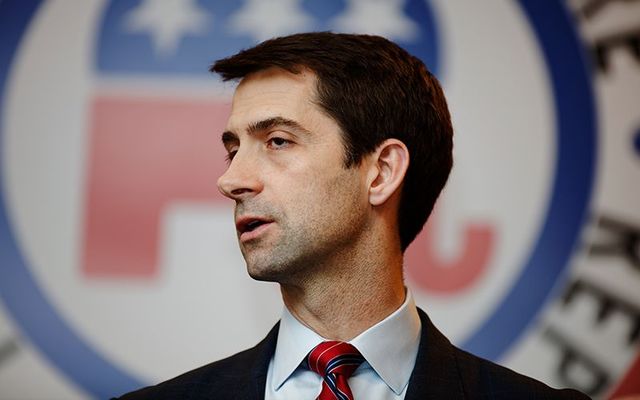 Remember the name Senator Tom Cotton from Arkansas and take note if he ever runs for president, which he intends to do some day. He should be remembered especially by the Irish in Pennsylvania and the Midwest states where presidential elections are won and lost. He did the Irish down for no real reason.

Senators left Washington yesterday without a motion to pass the E3 bill, which needed unanimous consent. They may be recalled to deal with the fiscal crisis but to all intents and purposes, E3 is dead.

Cotton is the man who killed the E3 program, which would have given an extra 5,000 visas to Irish people to come to America. It would have reopened the door a crack in allowing Irish citizens to come here in the largest number since the Morrison visas, in 1994. Currently, we have all of 1,200 green cards a year allotted to us - one-tenth of one percent of all green cards.

Alone among 100 senators, Cotton opposed the measure which had been passed unanimously in the House.

We also had another bad actor, perhaps inevitably one of our own, journalist Neil Munro “Irish born”, educated at University College Dublin who writes for Breitbart and slammed the Irish bill in a vicious piece that ran at a critical time. He took it upon himself to try and kill the bill. A self-hating Irishman it seems. He called Cotton's office looking to stoke the fire against the bill and play the informer - he succeeded.

We will always have our Gypo Nolans or informers and Neil Munro, who turned on his own people, is just one more name to the list. As Tip O’Neill once said there is no one more despicable than the Irishman who pulls up the ladder after him. Perhaps we should politely let Munro know what we think of him - you can find him here.

Speaker Paul Ryan is trying to sneak a big outsourcing & amnesty bill thru Congress to aid Irish gov't. No benefits for young Americans, of course. This ethnic, private, crony capitalist giveaway will crash if even one Senator asks for a fair exchange. https://t.co/Vi3soLWRsF

Close as we can figure the reason Cotton voted it down was because of Munro’s article and a long feud with House Speaker Paul Ryan who guided the bill through the House and from his own party. Cotton probably couldn't find Ireland on a map.

It wouldn’t be the first time Cotton has done the dirty.

When Barack Obama was president, he placed a hold on three ambassadors out of sheer hatred of the president which is what one nominee told the press Cotton had told him when she asked why he was blocking her.

Munro’s objection was the 5,000 Irish would take American jobs, ignoring the fact that, as an immigrant,  he is already taking some American's job himself. Munro is also well known for his disgraceful behavior interrupting an immigration speech by President Obama when he was in office. The racism of the attempt to heckle the president from the press pool was very evident.

U.S. and Irish politicians are quietly cooperating to transfer 5000 white-collar jobs per year from American graduates to Irish grads via the E-3 visa program. A sneak Senate vote is due soon. In 'fair trade,' US retirees could spend their 401Ks in Ireland https://t.co/CKRIerTh4E

Let us give thanks to all those who sought to pass the bill, especially the Irish Special Envoy John Deasy,  an Irish member of parliament, who labored for over a year to line up the House and Senate and in the end, fell short by just one vote.

Deasy quietly went about his business in Washington and almost pulled off the impossible. The Irish Embassy too played its role as did Taoiseach Leo Varadkar who appointed Deasy and got Trump's backing for the E3 initiative.

Let’s give a shout out to President Trump for agreeing to the effort and to his new Chief of Staff, Mick Mulvaney, who delivered a Trojan effort to get the bill passed.

On the Democratic side, Chuck Schumer was an incredible ally as always and won over every Democratic vote for E3 to be extended to the Irish. Thanks to Senator Dick Durbin and in the House Paul Ryan and as always, Ritchie Neal, Ireland's go-to friend, who co-sponsored the bill.

Thanks also to the Irish Lobby for Immigration Reform, the Ancient Order of Hibernians, and Irish Senator Billy Lawless, the emigrant senator, for trying their very best.

We fell short once again as we have so many times now on immigration. It is hard to see where it goes from here and we should not waste our time on recriminations.

A noble effort failed. We Irish are used to that and we are used to picking ourselves up and trying harder the next time. Despite Cotton, despite the weasel words of Munro, we will not give up. Given all our people gave to America we can never stop trying.

Should the Irish be given more access to US work visas? Let us know your feelings on Irish immigration to the US in the comments section below.