The son of Irish immigrants, is leading the world’s biggest police force through some challenging and unpredictable times with a laser focus on keeping people safe. 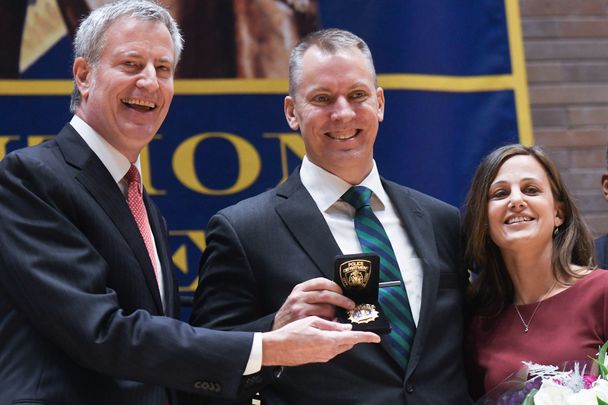 NYPD Commissioner Dermot Shea, the son of Irish immigrants, is leading the world’s biggest police force through some challenging and unpredictable times with a laser focus on keeping people safe.

The son of Irish immigrants who was raised in the Irish enclave of Sunnyside, Queens, Shea remembers making the trek into the city every single March 17 with his parents Ellen and Richard and his four siblings.  The Sheas would always head off bright and early to assume a prime viewing spot on Fifth Avenue – with lots of blankets and sweaters to keep warm “because it was always freezing,” Shea, 50, told the Irish Voice during a recent interview in his office at One Police Plaza in downtown Manhattan.

St. Patrick’s Day was sacrosanct in the Shea household, and it came with an added bonus -- a day off from school for the kids.

“We all went to Catholic grammar school and we had St. Patrick’s Day off, and then one year there was a change when the school didn’t give it off. And I remember my mother complaining about it,” Shea says.

Though the Shea family didn’t march in the parade when the children were young, there were many relatives who did.   Shea’s elder brother by seven years, James, eventually joined the line of march when he was with ROTC.  (James and Dermot graduated from the NYPD Academy together in 1991.) 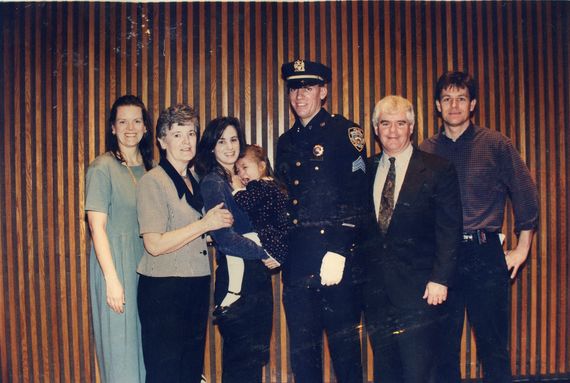 St. Patrick’s Day 2020 was going to be a different experience altogether for Shea.  He’ll be marching alongside his NYPD colleagues near the start of the parade, joined by his wife of 28 years Serena, and the long-range weather forecast indicates that there won’t be any bone-chilling cold to deal with, though the unknowns with the coronavirus epidemic keep mounting. [The parade has now been postponed]

“It’s something I’m looking forward to for sure.  Our Irish heritage is something to be very proud of,” Shea says of the parade.

Shea’s parents epitomized the typical 1950s Irish immigrant in New York.  Ellen Gallagher was born and raised in Tubbercurry, Co. Sligo; her future husband Richard Shea came from Crettyard, Co. Laois.  They made their way to America separately and met for the first time in New York; Shea isn’t quite sure what the occasion was.

After they married, Ellen and Richard lived in a one-bedroom apartment in Sunnyside. He worked as a union handyman and she stayed home to raise their growing family.

Read more: First NYPD cop to die in the line of duty was an Irish immigrant

“Dad never missed a day of work until one day he fell down and broke his kneecap.  He worked hard. He was a bartender at one time too,” Shea says of his father, who passed away at the age of 60 from cancer.

“He had a plow ahead mentality and was all about taking care of his family.  So was my mother.  You didn’t realize how good you had it with the meals and the cooking… it was a different time. We had dinner every night as a family and there was no TV allowed, and it was good.” 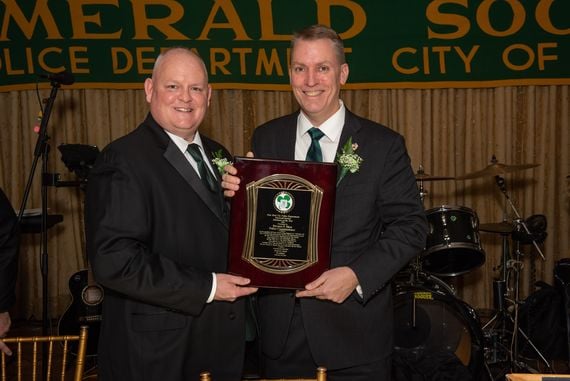 Shea is the fourth of five children, Helen, James, Geraldine and Paul being the others.  The girls did some Irish dancing and the boys had Irish music lessons “which didn’t stick for me,” Shea laughs.

For a chunk of their childhood, the Sheas lived in a one-bedroom apartment on 44th Street just off of Skillman Avenue and next to Queen of Angels parish where the kids went to school.  Needless to say, it was a tight squeeze.

“At that time there were four kids so we had two sets of bunk beds in the bedroom and my parents slept on a pullout couch in the living room,” Shea remembers.  “And we had a dog too.  Around 1977-1978 we moved to the other side of Queens Boulevard near St. Raphael’s into a two-bedroom apartment. For sure it felt very spacious.”

Shea made his first trip to Ireland when he was young, around eight or nine years old he recalls. He went for three weeks with his sister and an aunt.  They stayed in his mother’s small family farmhouse which had no running water or electricity, but there was an outhouse and plenty of animals on the land.

“I remember it vividly. I liked it a lot. I’ve only been back once since that time, and that was last year when I went to Dublin to speak at a conference. We didn’t go to Dublin when I was first in Ireland.  I look forward to bringing my family back; my wife has never been to Ireland and we look forward to going,” Shea says.

Typical of Irish immigrants of the time, it took decades for Shea’s parents to revisit the land of their birth.  They came from large families.  “Both of my parents were between 10 and 15 siblings each; I’m not sure of the exact number,” Shea says, and many of them emigrated as well, some to America and some to England.

“My mother didn’t go back to Ireland until 50 years after she came here.  She never had an opportunity and she didn’t really have the money.

Life in the NYPD

Joining the NYPD wasn’t something that Shea dreamed of while growing up.  “It actually never entered my mind,” he remembers.  After graduating from Xavier High School he went to college at SUNY Oneonta and majored in business economics, “and even then, I wasn’t quite sure what I wanted to do.”

He took a couple of tests, one for the NYPD and the other for the state police, and after graduation in 1991, he worked for Local 32BJ.  “I graduated on Saturday and started working on Monday,” he says.  The union was on strike at the time and he joined the picket line, but when the NYPD test came back affirmative Shea took the job as a beat cop “and I haven’t looked back,” he says.

“I loved it.  I loved working with people and I loved not sitting behind a desk.  It was great being out there and working with other cops.  Just even walking to your post was an adventure.  It could take you 20 minutes to get there, and all along the way you’d be meeting and greeting people.”

“New York was a very different place then and things have changed dramatically, but some things have stayed the same. People still love to see a cop on the street,” Shea says.  “When you see a cop on a train car, for instance, you feel reassured.”

Shea married his wife Serena in 1992, and they had the first of their three children in 1995 – the kids were born within four years of each other so they’re close in age. (The Sheas also have a grandson, Aiden.)  He remembers his first few years on the force as “a blur” between work and family commitments, but Shea took a number of highly competitive tests for promotion within the NYPD and aced all of them.

Prior to his appointment as commissioner, Shea was part of the NYPD’s top management brass, working out of One Police Plaza for the past six years.  His official biography says he was “instrumental in developing the NYPD's precision policing methods used to identify, investigate, and arrest the relatively small percentage of offenders responsible for much of the city’s crime and violence.”

When his predecessor as commissioner, James O’Neill, announced his retirement last November, Mayor Bill de Blasio moved quickly to install Shea into the post, firm in his belief that Shea is the right man at the right time despite some saying that another Irish American, white police commissioner isn’t what the city needs, and doesn’t represent the diversity of the NYPD.

“Dermot is one of the best-prepared incoming police commissioners this city has ever seen,” the mayor said. “Dermot brings a wealth of leadership experience, and he knows what policing needs to be in the 21st century.”

“It all happened very quickly, over the course of a couple of days,” Shea says of his promotion.  “I didn’t expect it or necessarily seek it, but it was certainly something I was not going to turn down.

“The thing about this office is there will be different people coming in, but the office, the position, to me is bigger than any one individual.”

The challenges are many and can be unanticipated – coronavirus being one of them.  But given his vast experience on the force, it’s tough to rattle Shea.

“We never thought three months ago we’d be talking about a virus like this,” he says.  “I think you will always have things like that.  Fill in the blank.  We will address it and get through it.”

The ultimate goal, he says, is simply said but vital to achieving: keeping people safe.

“And that may be from traditional crime, or it may be terrorism, or it may be traffic-related – just last week we had two kids hit by cars in Brooklyn and they died.  So we think of all of these things,” Shea says.

“I think people will look back on these last six years…we really came out of a tough time.  I think the journey is ongoing but I think we’ve done pretty well in how we police this city, how we’ve managed to keep crime down while we cut arrests which people don’t realize.”

Though overall crime in New York reached a record low in 2019, stats have ticked up for the first two months of this year.  New York State’s controversial bail reforms that were enacted on January 1, Shea and his NYPD colleagues feel, is a large part of the reason why.

“It’s affecting it significantly,” says Shea of the reforms, which nixed cash bail and allows a number of those arrested for crimes to immediately return to the streets.

“I’m optimistic we will have some movement on reforming the reform with the legislators.  What that looks like will be the key test. I think the reform was well-intended and probably you could argue should have been done earlier in terms of leveling the playing field so that people can face equal justice, and not, ‘I’m in jail because I have no money and someone else gets out because they do.’

Obviously, there is no typical day in the life of an NYPD commissioner.

“You sit in the middle of the hurricane, the eye of the storm, and watch it swirl around you, and you don’t lose focus on what’s important.  In any given day there will be different issues and you have to stay focused on the priorities,” Shea maintains.

“And those priorities are keeping people safe, having a good team around you and giving them clear direction.”

Shea’s free time doesn’t add up to much given the encompassing nature of his job.  He enjoys exercising, biking and running, and taking walks around the city.  His mother Ellen lives with one of Shea’s sisters in Pawling, a little town in Dutchess County where she still walks to Mass every morning.

The St. Patrick’s Day parade on Fifth Avenue requires a substantial NYPD presence from those officers not on the march.  Shea says his force is more than ready.

“The good news is we have a lot of practice and experience,” he adds. “We are able to handle large events pretty seamlessly.  Of course, the one question is the same one that comes up every year – the weather. Hopefully, it will be a beautiful day like 2019.”

No doubt Shea’s mother will have her TV tuned once again to her beloved parade, watching her son – minus the blankets this time – celebrating his Irish heritage, and leading the biggest police force in the world.