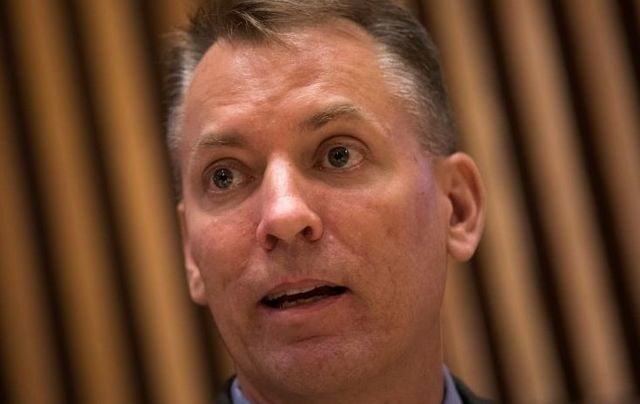 Irish American James O'Neill has announced his resignation as Police Commissioner of New York City, and Mayor Bill de Blasio announced on Monday that he has appointed another Irish American, Dermot Shea, to take over the role.

Shea’s appointment prompted questions about diversity in the leadership roles in the NYPD, to which de Blasio responded: “in the next few years, you’re going to see a lot of leadership elevated that represent the full diversity of New York City.”

De Blasio, O'Neill, and Shea all spoke at a press conference in New York City on Monday, November 4 to announce the news:

For his first day on the job in 2016, O’Neill, who joined the New York City Transit Police in 1983 before it merged with the NYPD in 1995,  was tasked with responding to a bomb that exploded in the Chelsea area of Manhattan.

During Monday’s press conference, O’Neill said: “I came into this job with one mission: to fight crime and keep everybody safe, and we did it and continue to do it.”

O’Neill said he is resigning in order to take a job in the private sector, and that it was an offer he “couldn’t pass up.”

Read More: NYPD -- No Irish Need Apply seems to be the new reality

During a 2017 interview with the Irish Voice, sister publication to IrishCentral, O’Neill, whose grandparents are from Co Longford and Co Monaghan, said: “My father would listen to the Fordham radio station every weekend working outside, with the Irish music blasting.

“He would always listen to Irish music. I’m laughing thinking about it. He was such a good guy, but it was overkill at times with the Clancy Brothers!  He liked Tommy Makem and the Dubliners too.

“I like the Dubliners more so than the Clancy Brothers. I like the old ballads. They are great.”

Despite O'Neill presiding over the lowest crime rate in New York City since the NYPD started tracking major crime, as well as the fewest number of homicides recorded since the 1950s, the Irish American is not held in high regard with the Police Benevolent Association (PBA) of New York, a union.

O’Neill indicated that his resignation is not in relation to the PBA’s vote of no confidence which it lodged in August following the NYPD’s controversial decision to fire Officer Daniel Pantaleo, who was involved in the fatal arrest of Eric Garner in 2014.

On August 28, the PBA issued a statement calling for New York Governor Andrew Cuomo to “remove” de Blasio and for O’Neill to resign.

Patrick J. Lynch, president of the PBA, said at the time in a statement: “For years, Mayor de Blasio has demonized police officers and undermined our efforts to protect our city. For years, Commissioner O’Neill has cravenly acquiesced to the Mayor and his anti-cop allies. The unjust termination of P.O. Daniel Pantaleo was merely the final straw: both men have displayed an appalling pattern of malfeasance and nonfeasance that disqualifies them from continuing to serve in their current offices. Neither can hope to regain the trust or confidence of New York City police officers. They must resign or be fired.”

Read More: On this day: First NYPD cop to die in the line of duty was an Irish immigrant

Just over two months later, O’Neill announced his resignation on November 4. De Blasio said he is looking forward to working with Shea:

As Commissioner, Chief Shea will focus on putting 21st century precision policing to work in order to deepen police-community bonds and end the scourge of gun and gang violence. https://t.co/ok0DIo0GUt

During the press conference, de Blasio touched upon Shea’s Irish American working-class upbringing, saying: “This is an American dream story if ever there was one. Dermot was not born with a silver spoon in his mouth.”

Shea, who grew up in a small apartment in Sunnyside, Queens with his Irish parents, said: “We were rich in so many ways, but it had nothing to do with money."

The Irish American paid homage to his late uncle, who served in the NYPD for a period, and his late Irish father, saying: “Somewhere upstairs there is a hell of a celebration going on in heaven. There is probably some Irish whiskey being spilled.”

Afterward, Shea tweeted that he was “humbled” to follow in the steps of O’Neill:

Humbled to follow in the footsteps of @NYPDONeill and to build upon his foundation of safety & service—forged in fairness & collaboration with the community we serve.

With reverence for the past—grateful to so many—I look to the future, honored to be your Police Commissioner. pic.twitter.com/OtFgLWKVQe

50-year-old Shea now lives in Manhattan with his wife Serena. Together they have three children and one grandchild.