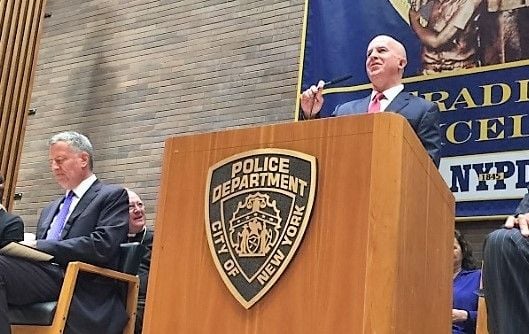 The new Police Commissioner of New York, James P. O’Neill, has been sworn in after an eventful first weekend on the job, in the midst of an ongoing investigation into the bomb which exploded in Chelsea, Manhattan, on Saturday, injuring 29 people. An Afghanistan-born American suspect was taken into custody on Monday morning after a shootout with New Jersey police.

Officials told Reuters they believe others were involved in the New York and New Jersey bombing plots and the investigation is ongoing. After the bomb attack on Saturday, O’Neill’s first day on the job, he told a press conference there would be a heavy police presence in public places in New York this week, and an additional 1,000 police and national guard were deployed.

O’Neill, who according to his mother loves Irish soda bread and his Irish heritage, joined the New York City Transit Police in 1983 and worked his way through the ranks to be promoted to Chief of Department in 2014. He took over the position of Police Commissioner from fellow Irish American Bill Bratton. The new Chief of Department Carlos Gomez was also sworn in.

"Thank you for allowing me to oversee the NYPD's evolution," @NYPDONeill at his swearing-in ceremony pic.twitter.com/esTA12c0LY

O’Neill was introduced by Mayor Bill de Blasio who spoke of the qualities he wanted in a Police Commissioner including the vision to continue Bratton’s work. Upon swearing him in de Blasio said “Jimmy I am honored to place the safety of the greatest city in the world in the hands of a great police leader and an even better human being.”

"On behalf of 8.5 million New Yorkers, thank you for taking this role as Police Commissioner," Mayor @BilldeBlasio pic.twitter.com/3VLVd8MmTt

In his acceptance speech, after making reference to his siblings in the audience mocking him, O’Neill spoke of the incident on Thursday night when NYPD detective, Brian O’Donnell, a native of County Offaly, was brutally attacked with a machete. O’Donnell was on his way home and was off duty but took action. The Commissioner commended his courage and New York spirit and wished him a speedy recovery.

Read more: Hero Irish NYPD cop shows what true bravery is all about

He went on to describe his first day as Police Commissioner of New York on Saturday when the bomb in Chelsea took place. He again commended the “bravery, the courage” on display. He said “the reason people become cops was displayed that night, the work that they did was just absolutely tremendous and it’s not just the NYPD cops. It was the State Troopers who found the second device. It was the Port Authority police officers. It was ATF, it was FBI, it was every agency that showed up. They showed up because they care about this city and they care about humanity. And again that’s the story I’m going to tell as the Police Commissioner of this city.”

The new Commissioner said that many people had asked if he always had aspirations to rise to this position. He said “No I didn’t…I came on this job. I wanted to be a cop and every rank that I held I wanted to do my best and if that brought me further recognition then fine but I did it because that’s the way I’d been taught by my mother to live my life.” Following his speech his mother was brought to the stage and presented with a large bouquet of flowers.

Mayor Bill de Blasio and PC James O'Neill welcoming the PC's mom to 1PP and the swearing in of NYC's new PC pic.twitter.com/m66UmAfpST

On Monday morning, just after 11am, while O’Neill’s inauguration was still in progress, Ahmad Khan Rahami, was taken into custody after a shootout, Reuters reports. He was being sought in connection to the Chelsea bomb which injured 29 people and possible links to other bombs. Mayor of Elizabeth, New Jersey, Christian Bollwage, released a statement saying the suspect had been shot and taken away by ambulance.

Just blocks from the Manhattan bomb, on Saturday, an another viable device, made from a pressure cooked (similar to that used in the Boston Marathon attacks) was found.

Also on Saturday a pipe bomb exploded in Seaside Park, New Jersey, before a charity 5K race to benefit Marines and sailors. The race was cancelled and no one was injured. Late on Sunday five devices were found near a train station in Elizabeth, New Jersey.

Khan Rahami (28), from Elizabeth, New Jersey, was taken into custody in Linden, 20 miles outside New York.

What a first (official) day on the job: new @NYPD commissioner O'Neill sworn in as #Ahmad_Khan_Rahami arrested pic.twitter.com/YQxN3EXmoo

Earlier on Monday morning investigators released a photograph of Khan Rahami and sent an unprecedented cellphone alert to millions of the public in the New York area during morning rush hour.

De Blasio said “I want to be clear that this individual could be armed and dangerous.

“Anyone seeing him should call 911 immediately.”

The New York Governor Andrew Cuomo suggested there may be an international connection to the attack. On Monday he said “Today’s information suggests it may be foreign related, but we’ll see where it goes.”

Here is the full video of James P O’Neill’s and Chief of Department Carlos Gomez’s inauguration:

Shortly after the swearing in ceremony, Commissioner O'Neill and Mayor de Blasio led a news briefing at NYPD headquarters on the Chelsea bombing case.

De Blasio said of the attack, “We have every reason to believe this was an act of terror" and that no other suspects were being sought at this time. Despite the successful arrest of Khan Rahami, the key suspect, Commissioner O'Neill described the case as "very much active." He said that now that the suspect was in custody, the investigation would focus on “whether this individual acted alone and what his motivations may have been.”

You can watch the full press conference below: