IrishCentral Contributor CJ Clancy takes a look at the life and military career of Irish American Major Henry A. Commiskey. 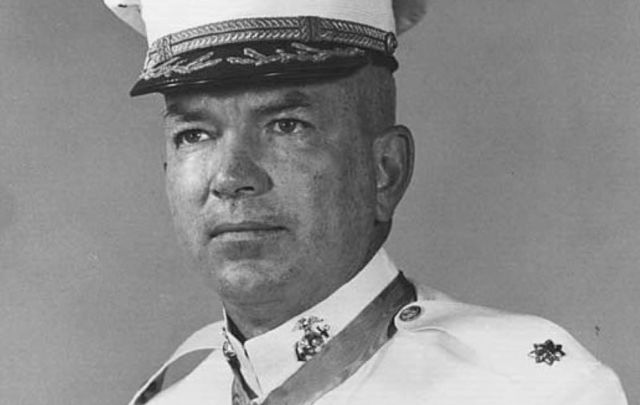 Henry Alfred Commiskey was the first Marine to be awarded the Medal of Honor for extraordinary heroism in the Korean War.

Commiskey attended the  Sacred Heart Catholic school in Hattiesburg, which was founded by Sisters of Mercy in 1900. Later, he worked as a brakeman for the Illinois Central railroad before joining the Marine Corps two days after his 17th birthday on the 12th of January 1944 and did his recruit training in San Diego.

After the Battle of Iwo Jima, where Commiskey was wounded, he received a letter of commendation for "exhibiting high qualities of leadership and courage in the face of a stubborn and fanatical enemy."

While drill instructor at Parris Island in South Carolina, Commiskey was offered a commission and he accepted. He commenced his training and was commissioned a second lieutenant on the 10th of September 1949.

The citation for his Medal of Honor read:

"For conspicuous gallantry and intrepidity at the risk of his life above and beyond the call of duty while serving as a Platoon Leader in Company C, First Battalion, First Marines, First Marine Division (Reinforced), in action against enemy aggressor forces near Yongdungp'o, Korea, on 20 September 1950. Directed to attack hostile forces well dug in on Hill 85, First Lieutenant Commiskey, then Second Lieutenant, spearheaded the assault, charging up the steep slopes on the run. Coolly disregarding the heavy enemy machine-gun and small-arms fire, he plunged on well forward of the rest of his platoon and was the first man to reach the crest of the objective. Armed only with a pistol, he jumped into a hostile machine-gun emplacement occupied by five enemy troops and quickly disposed of four of the soldiers with his automatic pistol. Grappling with the fifth, First Lieutenant Commiskey knocked him to the ground and held him until he could obtain a weapon from another member of his platoon and kill the last of the enemy gun crew. Continuing his bold assault, he moved to the next emplacement, killed two or more of the enemy and then led his platoon toward the rear nose of the hill to rout the remainder of the enemy. His valiant leadership and courageous fighting spirit served to inspire the men of his company to heroic endeavor in seizing the objective and reflect the highest credit upon First Lieutenant Commiskey and the United States Naval Service."

In September 1951, Commiskey was selected to become a student naval officer at the Naval Air Station, Pensacola. He received his wings in June 1953 at Corpus Christi and completed jet training at El Toro in California.

In July 1959, Commiskey was promoted to major and until his retirement in August 1966, served as a recruiter and instructor, student company commander, and executive officer at The Basic School where all newly qualified marine corps officers are taught the basics of being an "officer of marines" in Virginia.

After Commiskey retired in 1966, he moved to Meridian, Mississippi. On the 16th of August, 1971 Commiskey's wife arrived home and found him dead at 44 years of age from a self-inflicted pistol wound. Commiskey's health went downhill after his father Hugh passed away before Christmas in 1969. He was cremated and his remains scattered over the Pacific Ocean by his son.

Commiskey was awarded multiple distinctions throughout his military career: