Col Ruby Bradley: One of the most decorated women in US military history

IrishCentral Contributor CJ Clancy takes a look at the life of Ruby Bradley, a highly-decorated US Army nurse who was a prisoner of war. 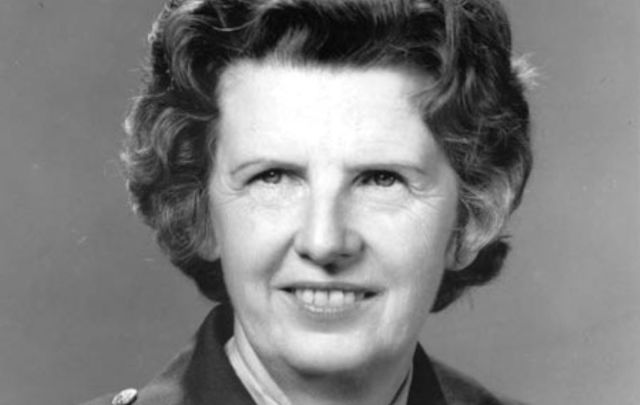 Ruby Bradley was a US Army surgical nurse and World War two Japanese POW, Korean war combat nurse. She became known as "ghe angel in fatigues" for caring for fellow POWs during her time captive in the Philippines during WW2.

Bradley was born on the 19th of December 1907 near Spencer, West Virginia to farmers Fred O. Bradley (O'Brallaghan) and Bertha Welsh (Breathnach).

Spencer is a small town of just over 2,000 inhabitants. The town was chartered in 1859, named after a distinguished lawyer, judge, and politician Spencer Roane whose grandfather had immigrated from Ireland.

Close to Spencer in nearby Lewis County is Ireland, named after its first settler, Irishman Andrew Wilson. Sixteen percent of West Virginians trace their heritage back to the Emerald Isle.

In 1926, Bradley graduated from Glenville State Teachers College and taught for a number of years before enrolling in the Philadelphia General Hospital School of Nursing in 1930 and graduating in 1933.

In 1934, Bradley was commissioned 2nd Lieutenant in the Army Nurse Corps, serving in Walter Reed Hospital in Washington, DC until she was sent to Station Hospital at Fort Mills in the Philippines in February 1940. From there, she transferred to Camp John Hay on the Filipino island of Luzon, 200 miles from Manila.

During the raid, a young boy out walking with his mother turned blue with shock and had to be brought to the infirmary. The doctor was doing his utmost to revive the child but to avail. Under tremendous pressure to treat other patients, Bradley was handed a 6-inch syringe filled with stimulant to get the child's heart beating again.

Bradley, not keen on the syringe plan, spotted a bottle of whiskey in the operating room. She quickly poured the whiskey on some gauze with sugar and pressed it to the child's mouth. Moments later, the child was revived and sucking on the gauze.

Japanese forces soon gained total control and American forces evacuated on the 23rd of December 1941. Bradley, along with a doctor and nurse, attempted to flee but surrendered five days later after a couple that initially aided their escape later betrayed them to Japanese forces.

On surrendering, they were sent back to Camp John Hay which was by then under Japanese authority. Bradley spent a total of 37 months in captivity assisting in 230 major operations and delivering 13 babies. POWs were living on half a cup of rice in the morning and half a cup at night.

By September 1943, Bradley was sent to Santo Tomas Internment Camp in Manila. During her time as a POW at Santo Tomas, Bradley consistently chose to share her meager rations with children. The weight she shed made room to smuggle surgical equipment and medication from the hospital to the camp at tremendous risk of her own life.

On the 3rd of February 1945, US soldiers overtook Santo Tomas, ending Bradley's three years of captivity. She weighed just 80lb. Bradley returned to America and continued with her military career receiving a Bachelor of Science degree from the University of California in 1949.

In 1950, Bradley became the Chief Nurse for the 171st Evacuation Hospital during the Korean War. In November 1954, under heavy attack from tens of thousands of advancing Chinese soldiers, she was the last to evacuate while ensuring all the sick and wounded were transferred onto the plane before fleeing herself

The ambulance she traveled in was blown up by an enemy shell as the plane took off from the runway.

In 1951, Bradley was named as Chief Nurse for the Eighth Army,, supervising over 500 army nurses throughout Korea. On leaving Korea in June 1953, Bradley received a full-dress honour guard salute, the first woman to receive this honour internationally and nationally.

In 1958, Bradley became the third woman in American history to be promoted to Colonel at Fort McPherson Georgia. She retired from the military in 1963 and continued working as a supervisor at a private nursing home in West Virginia for a further 17 years.

On 28th May 2002, Colonel Ruby Bradley passed away in Hazard, Kentucky aged 94. Her coffin was carried by six horses and followed by a symbolic riderless horse to Arlington National Cemetery and after burial, a 21 gun salute.

Below is the impressive list of awards presented to Bradley over her career: