Legendary Jimmy Neary, who welcomed presidents, cardinals and VIPS to his famous pub, dies at 91

The Tubbercurry, County Sligo native worked right up until days before his death, hosting and welcoming New Yorkers to their home from home. 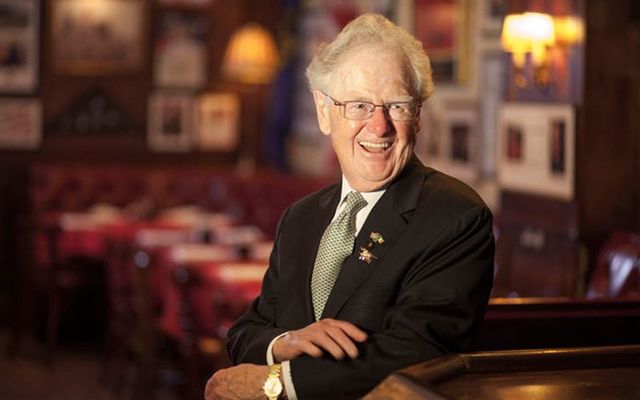 The New York Times called him the “Irish Pub Maestro” but sadly, Jimmy Neary, owner of one of America’s most legendary watering holes, has now passed on leaving behind an incredible legacy.

“It’s lovely, this life,” Neary told The New York Post in an interview in 2013 about how he ran his business. “Everybody’s smiling. They might be a sourpuss when they come in, but they won’t be when we get done talking to them.”

True to his word, Tubbercurry, County Sligo native Jimmy Neary worked right up until days before his death, hosting and welcoming New Yorkers to their home from home.

On one of the bar's most famous nights, Neary was about to shut up shop for the night when a tap on his window announced the arrival of frequent guest Mayor Mike Bloomberg accompanied by then Secretary of State Hillary Clinton and President Bill Clinton, as well as assorted VIP guests. Clinton, he remembered, warmed up with an Irish coffee and charmed the staff and customers.

Jimmy was non-partisan and received an invitation to the White House one Saint Patrick’s period from George Bush, Sr. It was a long way from Tubbercurry.

Cardinal Timothy Dolan was another frequent visitor to Neary's, where he once declared that he could order any exotic meal in the world and somehow Jimmy would come up with it.

Mary Higgins Clark, one of the highest selling authors of all times, regularly wrote Neary into her books, while Kathie Lee Gifford, an ever present in Jimmy’s life, even wrote a special song in his honor.

Politicians aplenty came calling. Ted Kennedy visited, as did his sister Jean Kennedy Smith, former Ambassador to Ireland who lived in nearby Sutton Place. Governor Hugh Carey called it his local and hatched many a political plot there.

Congressman Joe Crowley and a slew of leading politicians gossiped, did deals and made friends in Neary’s. Also a frequent visitor was former New York Governor George Pataki, while perhaps the most popular guest of all was film legend Maureen O’Hara, who described Neary’s as her home from home.

The New York Times considered him such a celebrity that they wrote a column about how he spent his Sundays (a visit to his wife Eilleen’s grave, mass and straight into the restaurant to work same as Monday, Tuesday, every day in fact, except December 25th).

Last year NBC did a remarkable story on how Neary’s survived the pandemic and bounced right back when business resumed.

Neary always denied he ever worked, preferring to say it was just a privilege to host so many wonderful people and he never tired of wondering who would be next through the door into his restaurant.

While he welcomed the high and mighty, Neary was well known as an outstanding employer, Proof was that several of his waitresses worked for over fifty years for him-an unheard of loyalty in this quick job change world.

He was also known as a deeply compassionate man, customers who lived alone often got invited to Christmas dinner, some folks who arrived with too much beer and were deemed a danger to themselves were quietly driven home.

A truly lovely gentleman who despite his small frame could have an obstreperous customer outside on 57th st before they knew what was happening. When first in NYC in 1976, it was my home away from home. RIP Jimmy. https://t.co/pFwAROpNj5

Neary opened the bar on Saint Patrick’s Day 1967 with a partner, Brian Mulligan, since deceased, and made his first splash when American hero, astronaut and senator John Glenn visited for dinner. After that Neary’s took off like a booster rocket.

In a tribute after hearing of Neary’s death, former Congressman Joe Crowley, a frequent visitor and friend, stated Jimmy Neary was “an NYC institution. He was the ultimate successful immigrant story, he was a self made man who sat with presidents,mayors, bishops congressmen and governors.”

It was all a long way away from his native Sligo where Jimmy Neary was born in 1930. His first job was as a draper’s apprentice but the drapery in typical Irish style was attached to a pub and Neary loved pulling pints and telling stories.

He went into the sheep business and sold enough at a fair to earn passage to America. As Neary recalled, a neighbor's child who had gone to America agreed to sponsor him.

“While we hadn’t seen Anne Gallagher for many years, she remained a close family friend, and she and my mother often corresponded. So it was no surprise that when my mother told her that it had long been my dream to come to America, she volunteered to be my sponsor. Back in those days,” Neary explained in an interview with The Published Reporter, a Palm Beach publication.

“Immigration laws required that a foreign-born person needed a sponsor in order to immigrate to America, but sponsors were often hard to come by. Fortunately, Anne sponsored me, and three months later I arrived in New York City, a legal immigrant with a green card proudly living in the greatest nation in the history of the world.”

Doing his patriotic duty, soon after he arrived, Jimmy got drafted to the army and served, in a tank division. Back in New York he was hired as a porter by the New York Athletic Club and perhaps one of his greatest moments was when they made him “Man of the Year” some years back, the first former employee to win the award. In 1967, he and a partner, Brian Mulligan, decided to go into the bar business together and the rest, as they say, is history.

Jimmy Neary was of a time and place when emigrants were welcomed, when working hard paid off and intense patriotism for his adopted country ran deep in his soul.

He established an extraordinary business like ‘Cheers’ where everyone felt they had a second home and you were greeted with a smile and good will and personal touch that you would rarely find in today’s soulless gastropubs.

Neary’s was the antithesis of a gastropub it was where Jimmy made sure ‘Friends’ met ‘Cheers’ at 358 East 57th, New York.

His family posted a note on the door of Neary’s on Saturday.

“We want to thank you all for being a part of his life. Dad loved you all and he cherished being with you for the past 55+ years.You were all a critical part of his family and enriched his life in countless ways. As he always said ‘I love my life!’”