A look at the Irish enlistment during the US Civil War era. 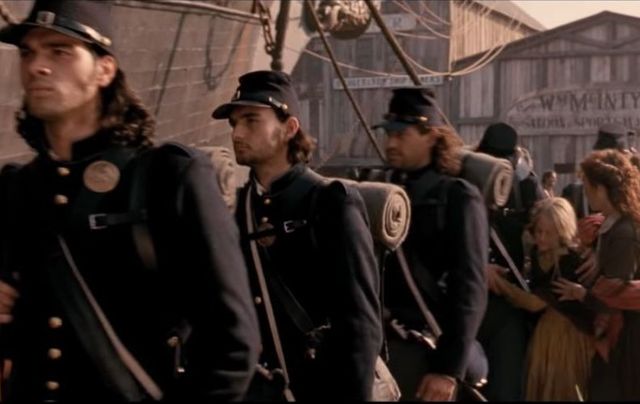 How true was Martin Scorsese's depiction of Irish emigrants being recruited to the Union army in "Gangs of New York"? Movieclips, YouTube

There is little doubt that many Irishmen enlisted in the Union army very shortly after their arrival in the United States.

Editor's note: On this day April 12, 1861, the Confederate Army opened fire at Fort Sumter in Charleston Bay, launching the American Civil War. The War raged for four years and caused the deaths of over a million people. Here, Irish historian Damien Shiels explores the stories of the 150,000 Irishmen who fought in the War of the Rebellion.

One of the best-known scenes in Martin Scorsese’s 2002 movie “Gangs of New York” is that which depicts the enlistment of Irish emigrants ‘straight off the boat’ into the Union army. The seemingly unsuspecting men are quickly dressed in uniform and packed off for the front, even as those unfortunates who have gone before are brought back in coffins.

This scene is one of the most influential in dictating modern memory of Irish recruitment into the Union army. The popular image of thousands of Irishmen, ignorant of what they were getting into, joining up the moment they stepped ashore, is one I encounter frequently. But how true is it?

There is little doubt that many Irishmen enlisted in the Union army very shortly after their arrival in the United States. There is even some evidence of illegal recruitment from Ireland itself, although this appears to have been extremely rare. When Irishmen were ‘duped’ into joining the army, it was unfortunately often the case that it was other Irishmen – like Patrick Finney- who were the ones trying to profit from their enlistment.

It is also open to question just how unaware the Irish landing in America were of the realities of the American Civil War. The sheer number of Irish in the United States meant that there was a constant flow of information about the conflict crossing the Atlantic. Many of these letters - written before the age of censorship - gave explicit detail of what was occurring in America between 1861 and 1865, and of what service in the Northern armies meant.

The more I investigate the Irish experience, the more apparent it is that the type of incident portrayed in "Gangs of New York" rarely, if ever, occurred.

Far from being duped, it was much more likely that many of these men had traveled to the United States with the express intention of joining the military, in the hope of benefiting from the financial rewards available for doing so. This was the primary motivation for Irish enlistment in the Union Army from at least 1863 onwards. These men were not stupid - they came from a country where enlistment in the British Army for economic reasons was commonplace, and they came informed about the Civil War.

The New York Irish-American Newspaper of 23rd July 1864 presents an interesting counterpoint to the scene depicted in "Gangs of New York." It outlines that serious consideration had in fact been given to opening a recruiting station at Castle Garden, where Irish and other emigrants arrived in America.

However, they decided against it, as it was thought it would ultimately prove counter-productive. The main reason put forward for this was that Irish-American and other communities would quickly inform those at home as to what was going on, discouraging future prospective emigrants. This would impact not only the economy but ultimately also enlistment into the military.

The New York County Volunteers Recruiting Committee presided over by Mr. Orison Blunt, recently applied to the Commissioners of Emigration for permission to establish a recruiting rendezvous within and in connection with the emigration depot at Castle Garden. The Commissioners very properly refused such permission and authorized their agent to convey such intelligence to the Committee. The following is a copy of the letter of Mr. Casserly:

OFFICE OF THE COMMISSIONERS OF EMIGRATION, NEW YORK, JUNE 30

Dear Sir- Mr. O. Blunt, the Chairman of the County Recruiting Committee and member of the Board of Supervisors, called here yesterday, and stated that he had conversed relative to a building to be erected on the Battery for recruiting purposes, with some of the Commissioners, and concerning a passage-way opening into and connection Castle Garden with said building, and that he had been sent to me for the purpose of learning if there were any objection to such connection with Castle Garden. In reply I informed him that I had not heard anything about the matter before, and that I believed there were no serious objections; which, however, I did not deem proper to state at that time, but would do so in case the matter came before the Board at the meeting to be held in the afternoon, and my opinion was requested by the Board. To do so sooner, on such an important matter, might have been considered an assumption of authority on my part.

At the meeting to-day, I mentioned the matter to several of the Commissioners, and while on account of their being no quorum, and as no official communication had been received by this Board from the Board of Supervisors or any other body, there could be and was no official action taken on the matter; yet the opinion of the Commissioners was decidedly adverse to granting such a request, on the ground that it would be injurious to the country in interfering with emigration, as would be the case as soon as known in Europe; and would be confirmatory, to a certain extent, of the charges made in the British House of Commons, as well as in France and Germany, by rebel emissaries and sympathizers, that the armies were being filled by the forced enlistments of arriving emigrants. As it is, the resident friends of emigrants expected to arrive are much excited on this very subject at present, and their persuasions and advice, in the form of letters of their friends in Ireland and Germany, as well as other countries from which emigrants come, would be immediately added to keep emigration from the country, and thus an injury inflicted on the industrial prosperity of the country exceeding a thousand fold the increased benefit in the way of additional recruits obtained in the manner proposed by Mr. Blunt.

Being a member of the Board of Supervisors, as well as of this Commission, I have deemed it proper to advise you of what occurred in relation to this matter, to which I have taken the liberty of appending my own views of the application, as the subject appears to me.

*Damian Shiels is an archaeologist and historian who runs IrishAmericanCivilWar.com, where this article first appeared. His book "The Irish in the American Civil War" was published by The History Press in 2013 and is available here.