The Irish have always had the gift of the gab and love to tell a good story so it's little wonder that they've made some brilliant movies over the years. 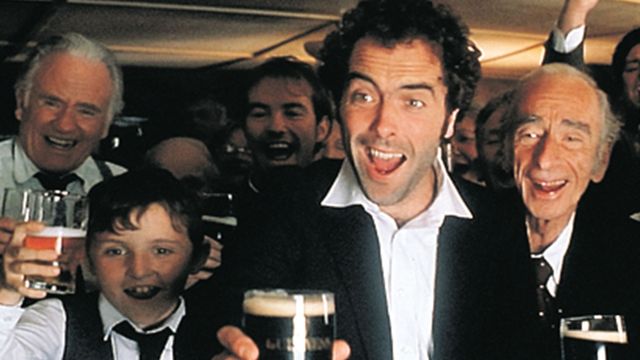 "Waking Ned Devine" (1998) is one of the most heartwarming funny movies you'll ever watch.

The Irish have always had the gift of the gab and love to tell a good story so it's little wonder that they've made some brilliant movies over the years. Here's our pick of the best!

From the comic genius of the late David Kelly in Waking Ned Devine to the brilliant soundtrack in The Commitments, we've put together our choice of the top Irish movies that you'll want to add to your Netflix, Amazon, or whatever list you're working through.

Charming comedy set in a tiny, rural Irish town. When lottery winner Ned Devine is found dead - lottery ticket in hand and all - the townsfolk band together to fool the authorities into thinking Ned is alive, so they can receive the cash and share it. Starring Ian Bannen and Fionnula Flanagan.

A beautiful, romantic, original musical set in the streets of Dublin. Glen Hansard of The Frames plays a street musician who meets fellow musician and Czech immigrant (Marketa Irglova). Together they work through pain, the past and new love through captivating music. Hansard and Irglova won the Oscar for Best Original Song (2007).

The controversial film that put Irish director/screenwriter Neil Jordan on the map. Set in rural Ireland and bustling London, IRA member Fergus (Stephen Rea) develops a friendship with his captive, Jody (Forest Whittaker), and the kidnapping goes horribly wrong. Fergus then flees to London, where he seeks out Jody's girlfriend, Dil. An intense and thorny plot ensues.

An endearing Roddy Doyle novel-turned-screenplay. An unwed 20-year-old named Sharon Curly shakes up a working-class Irish community when she becomes pregnant and refuses to name the father. Though full of quick wit and sarcastic banter, the dramedy has its touching, "family values" moments. Starring Colm Meaney and Tina Kellegher.

A dark comedy with an Irish star-studded cast. Intermission follows the lives of a handful of dysfunctional characters whose choices all unwittingly affect each other's lives. Set in Dublin, the film takes on the grand themes of life, love and the law. Starring Cillian Murphy and Colin Farrell.

In the Name of the Father

The oscar-nominated film based on the real-life experiences of Gerry Conlon, the alleged leader of the Guildford Four. Daniel Day-Lewis stars as Conlon, a Belfast man wrongly imprisoned for the 1974 IRA bombing of a pub in the U.K. Nominated for seven Academy Awards including Best Picture, In the Name of the Father shows one man's 15-year struggle for his innocence and for truth.

A story about an Irishman's love of his land from director Jim Sheridan. Bull McCabe (played by Richard Harris, who was nominated for an Oscar for the role) is a farmer in Ireland's rural west. When his field is threatened to be sold to an outsider, Bull will do anything in his power to stop it from happening. An unforgettable film about the conflict between "old" and "new" Ireland.

A true story about an Irishman who overcomes his disability to become an amazing painter, poet, and writer. Another film from Jim Sheridan, it documents the extraordinary life of Christy Brown (Daniel Day-Lewis), a working-class Irishman born with crippling cerebral palsy. With the encouragement of his mother, played by Brenda Fricker, Christy learns to write and draw with his only functional limb - his left foot. Both Day-Lewis and Fricker won Academy Awards for their roles.

A beloved classic starring John Wayne and Maureen O'Hara. This romantic drama from director John Ford tells the story of Sean Thornton, a retired American boxer who relocates to Ireland to reclaim his family's farm, and Mary Kate Danaher, the fiery Irishwoman he falls in love with. Although its portrayal of Ireland may be a bit outdated, the film is a genuine tribute to Eire, and both an American and Irish favorite.

Legendary Irish film about a group of down-and-out Dubliners who form a soul band. Jimmy Rabbitte has dreams of creating the ultimate soul group and succeeds in bringing together a bunch of talented, eclectic characters. But eventually, personalities clash, and the survival of the band is threatened. This adaptation of the Roddy Doyle novel featured a relatively unknown cast at the time but was welcomed with critical acclaim and a successful box office run.

A touching film starring Samantha Morton and Djimon Hounsou, among others. Documents the adventures, struggles, and triumphs of a family of Irish immigrants living in a rough neighborhood in New York City.

Yet another great product of Roddy Doyle's writing. A quirky, charming film about a teacher who meets and subsequently falls for a woman in a pub who turns out to be a burglar.