"Rather than acknowledge the full extent of our complicated history are we now to mark only the centenaries of those parts of it that we like?" 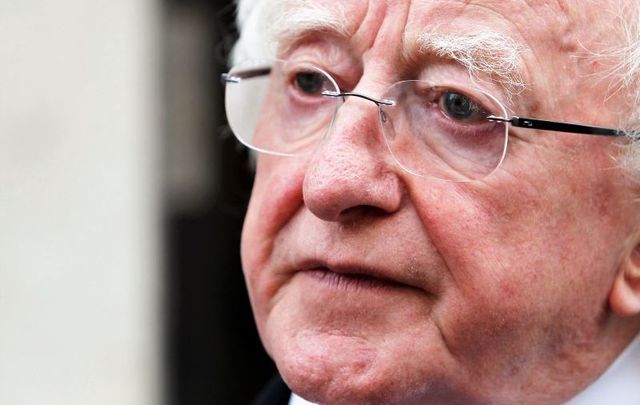 You can be sure President Michael D. Higgins is loving the controversy he started last week by turning down the invite to an event to mark the centenary of partition and the establishment of Northern Ireland.

No one enjoys the limelight more than our Miggledy. He's been out of the headlines for a while -- even his trip to meet the Pope last week was largely being ignored until this blew up -- so the row is a welcome boost for our elfin president.

It has given him the chance to draw himself up to his full height, puff out his chest and be all serious and solemn as he puts us mortals of lesser intellect on the right path. No better man than Michael D. for a lecture on what's right and wrong.

But is he right about this? Given that he also thinks that Fidel Castro was a great guy and that Cuba and some very dodgy regimes in Central America were beacons of hope for mankind, one might be forgiven for being a bit doubtful occasionally about his judgement. And this is certainly a case in point.

The event next month had attracted little attention before Higgins had his attack of the vapors and turned down the invite. It's one of many events that are being held to mark the centenaries of various points in our turbulent history 100 years ago -- the 1916 Rising, the War of Independence, the treaty, the Civil War, partition, the creation of Northern Ireland etc. Events are being held north and south.

None of this is easy and it's fraught with the danger of stirring up old passions and enmities. To be honest, a lot of people here are already fed up with the so-called Decade of Centenaries and would prefer to concentrate on today's problems instead.

But the justification is that we need to acknowledge what happened 100 years ago and, hopefully, learn from it. And the event in Armagh next month to mark partition is very much in that context.

Bear in mind that the event is not being organized by the Democratic Unionist Party (DUP) or hardline loyalists wanting to glorify the creation of the wee North and rub the noses of the Taigs in it. It's an inter-denominational religious service in St. Patrick’s Cathedral in Armagh organized by the leaders of all the main churches on the island, including the head of the Catholic Church in Ireland Archbishop Eamon Martin. The Queen is attending, as well as various dignitaries and political and civic leaders.

The invitation, sent to Higgins six months ago, describes the forthcoming event as "a Service of Reflection and Hope to mark the Centenary of the partition of Ireland and the formation of Northern Ireland." Higgins said last week that this wording "isn't a neutral statement politically" and is the reason as president he had to turn down the invite.

One might ask if he is being a tad oversensitive here, reading something into the invite wording that is not actually there. Or even that he is looking for an excuse to be offended (like the DUP leader Jeffrey Donaldson always seems to be doing).

Note that the invite says that the event will "mark" the centenary of partition. It does not say celebrate (as some media reports and commentators wrongly suggested). It does not even say commemorate. It says mark, an objective, anodyne word to note or acknowledge something, a word that does not imply celebration or even approval.

As the saying goes, we can't change the past but we can learn from it. That was the stated purpose of this event.

Last March, when the invitation was issued, the church leaders said in a statement they were "deeply mindful that the events of 100 years ago evoke a range of responses from communities across these islands. For this reason, this point of reflection will provide an opportunity to affirm our common commitment to peace, healing and reconciliation."  The reference in the invite to "a Service of Reflection and Hope" makes this clear.

If Higgins were to attend next month and speak at the event, he could reflect on the reality of partition and what it meant to the Catholics in the North. He could tell the truth and speak for them. He could also express our hope for a better future for everyone on the island and the need for reconciliation and forgiveness on all sides.

We all know the partition of Ireland was a disaster and created a sectarian nightmare for Catholics in the North. But it happened. The alternative at the time was pogroms and even war, something Michael Collins realized which was why he accepted the treaty. We would do well to remember the realities of the time.

While we remember partition and the awful system it created in the North we also need to remember that the society that emerged in the south -- priest-ridden and poverty-stricken -- was far from perfect. That also needs to be part of our reflection on that time. There was much that Higgins could have said at next month's event and it's a shame he won't be there.

To be fair to him, he says that he did signal to the organizers months ago that he had a problem with the title of the event. It seems extraordinary that he and the church leaders did not negotiate a formula of words that would address his concerns. We don't know if Higgins even tried.

That chance now appears to be gone because the issue has become so politically sensitive. And the one to blame for that is Michael D.

The peremptory manner in which he dealt with the issue last week when it emerged in the media was not helpful. First of all, there was a statement that he "was not in a position to attend" which could have meant anything. That was dismissive to the point of being insulting.

It took him two days to clarify what he meant. Part of that explanation was that he now had another event scheduled for that day, a reception at the Áras (his residence) for a group of statisticians!

Another reason appeared to be simply that he was offended and his nose was out of joint. When questioned in Rome about the invite refusal he told a reporter that he had been referred to as "the president of the Republic of Ireland" instead of "the president of Ireland."

Everyone assumed that he was referring to the wording of the invite from the church leaders. If he was, he was wrong. The invite used his correct title. In fact, it was the DUP who referred to him as the president of the Republic when commenting on his refusal.

That mistake was telling. The reality is that he is president of the Republic, even if his official title remains president of Ireland (implying the whole island). He was voted into office by people here, not in Northern Ireland.

Since the Good Friday Agreement, we have abandoned our claim to the North and accepted that unity will not happen until a majority there want it. Michael D.'s Jesuitical insistence on the right title suggests he has forgotten this.

It's possible that there is another reason for his refusal. An attempt by the government here to have an event to mark the tragic role played by the Royal Irish Constabulary (RIC) 100 years ago became so controversial that it was abandoned.

Critics conflated it with the role of the Black and Tans, even though the RIC were ordinary decent Irishmen who were the police at the time and were caught on the wrong side of history. The furious reaction to any RIC commemoration may have prompted Higgins to avoid trouble.

Certainly, there is a nasty undercurrent flowing beneath the surface here which emerges whenever the complexities of our history are being discussed. The online reaction last week to Michael D.'s refusal demonstrated this, with an outpouring of bile and glee.

"Go On Miggledy, Ye Boyo!" "Why don't our politicians grow a pair like Michael D.?" "Small in stature, a giant of a man!" There was a torrent of similar comments online reveling in the idea that Miggledy was sticking it to the unionists.

One legitimate concern here was that there are other events planned in the North around the same time which will definitely be a celebration of the establishment of Northern Ireland (just as we celebrated the 1916 Rising). Sinn Féin and the SDLP are boycotting all such events.

But Higgins could have avoided them. He could have taken part in the religious service in Armagh and then returned home. He could have made a valuable contribution to a debate on partition, with an address at the service  or a speech either before or after the event (no better man than Miggledy for the tortuous speeches!)

Sadly, he has missed that chance and his decision has implications. Rather than acknowledge the full extent of our complicated history are we now to mark only the centenaries of those parts of it that we like?

If we are going to pick and choose, what about the Civil War? Do we commemorate those on one side but not the other?

Given all of Higgins’s talk in recent years about reconciliation, his decision is disappointing. It's also less than one would expect from someone who fancies himself as an intellectual capable of dealing with all the complexities of history and society.

It's true that he is wildly popular here. People tend to forget that he was an outsider in the race when he was first elected.

Since then his diminutive stature and mad professor look, as well as the emotional speechifying, have endeared him to the nation. People see him as a bit of fun and take him less seriously than he does himself. You can even buy a Michael D. tea cozy for your teapot.

He did not reach the top levels of either academia (he was a lecturer in sociology) or politics (he was minister for arts for four years) and was lucky to become president. Once there, he developed a new gravitas accompanied by delusions about his intellectual weight and the importance of the role and independence of the presidency.

In reality, he would be better off taking a lot more advice from the government before he takes decisions -- and this controversy is clear proof of that.

Of course, there are many people here who are delighted that he is upsetting the unionists. But he is out of step.  Just over a week ago, Minister for Foreign Affairs Simon Coveney was at a similar centenary event in Belfast attended by the DUP, Sinn Féin, and U.K. politicians.

Coveney -- or even better, Taoiseach Micheál Martin -- should be there for next month's event. After Michael D.'s refusal, that needs to be done to signal that while we can be critical of the past we are not stuck there.