The Irish president has become embroiled in controversy after refusing to attend a partition commemoration service in Northern Ireland. 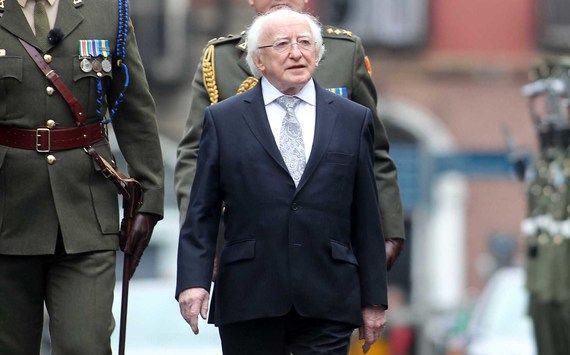 Ireland’s President D. Higgins deserves enormous credit for refusing to mark the 100th anniversary of the partition of Ireland in a memorial event next month. The event is entitled a "Service of Reflection and Hope to Mark the Centenaries of the Partition of Ireland and the Formation of Northern Ireland.” The queen will attend in Armagh where the event is being held.

First of all, partition was the worst thing to happen to Ireland in the last century. Having the Irish President attend an event marking its centenary would be disastrous. It’s perfectly fine for the Queen as her lot created it.

Secondly, without fail, events are remembered for being in the past,  9/11, The Holocaust, the Two World Wars etcetera. Partition has never been more in the present as the political forces bearing down on it from Brexit to a border poll have never been more relevant.

President Higgins declined the invitation because the title of the event made it clear it was marking the centenary of the partition of Ireland as if it were some kind of reason for celebration.

Higgins stated baldly that “What had once been an invitation to a religious service, or religious event, had become in fact, a political statement.”

Higgins is right. The partition of Ireland was a disastrous event with 600,000 Catholics suddenly corralled into a British state set up specifically to make them second-class citizens. Nobody voted for partition, nobody was consulted on the Catholic side. An apartheid state with an arbitrary border was created.

It was a “Protestant parliament for a Protestant people” in the words of Northern Ireland's first Prime Minister Sir James Craig.

Its racist and sectarian undertone was fully revealed by another comment from Sir Basil Brooke, later Northern Ireland’s Prime Minister, who  stated that no Catholics should be employed before Protestants and that he “felt he could speak freely on this subject as “he had not a Roman Catholic about his own place” (change the word Catholic to Black and you get the idea)

Bearing such history it is no surprise that President Higgins, who has displayed enormous sensitivity on Northern Irish issues, felt he could not attend.

Of course, the neo-unionists in Dublin were shocked that their President had made a tough call. Despite the fact that none of the Northern nationalist parties will attend for the same reason as Higgins, John Bruton, former Taoiseach, memorably renamed as “John Unionist” by the late Albert Reynolds when he was Taoiseach, came charging like a snorting bull into the debate,

Bruton first claimed Higgins had transgressed the Irish constitution and demanded he be told to go to Armagh which was a laughable argument according to every constitutional scholar surveyed. After all, the government had no authority to demand that the independently elected Higgins go somewhere if he didn't want to go. If the President of Ireland has to explain every time why he does not go somewhere it would be a farcical situation. Bruton slunk away after his ridiculous reasoning was exposed.

The unionists of course were deeply aggrieved. No doubt they would also have been aggrieved if he had accepted. After months of trying to tear down Stormont and refusing to meet Irish ministers, it was definitely a unionist kettle calling the pot black.

The big winner is Higgins as seems evident by the overwhelmingly positive response. He called it as it is, told it like it was, said it like it needed to be said. No Irish person worth their salt would ever commemorate partition and give it credence. There can be no official acknowledgment of 100 years of a state founded on apartheid lines. Hopefully, other politicians will soon find out the same truth.