Sinn Féin's Mary Lou McDonald has called for the sharing of excess vaccines between Ireland and the United Kingdom. 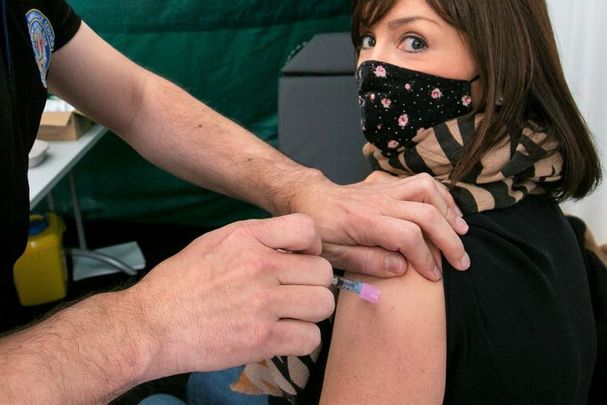 Ireland's under-fire Covid-19 immunization rollout has been given a major shot in the arm with the opening-up of mass vaccination hubs across the country.

Healthcare workers and the over-70s will be among the first to receive the jabs, as efforts are stepped up to improve the relatively slow rollout of vaccinations.

The launch of the country's new vaccination hubs comes as concern grows over the slow place of vaccination in Ireland, and across the EU as a whole.

In a move that took many by surprise last weekend, Sinn Féin leader Mary Lou McDonald appealed directly to the British government to share any surplus vaccines with Ireland.

In an interview on British TV station Sky News, McDonald said a spirit of "generosity and solidarity" on vaccine sharing should extend globally.

And in what the Irish Daily Mail suggested will be seen as "a major thaw" in Sinn Féin-U.K. relations, she appealed directly to British Prime Minister Boris Johnson's Tory-led government to work together with Ireland in the fight against the killer disease.

She continued, "Certainly if there is an excess of supply in Britain and if there is a capacity for that to be shared with Ireland at some point, well, yes, of course, absolutely, the project here is to get people vaccinated.

"This is a race against this virus and against death, so yes, I think a spirit of fairness and generosity needs to prevail in this, my goodness, above all issues.

"If the scenario were vice versa, I would expect that a similar generosity would be afforded to the British people because the virus doesn't care about politics or borders or any of those things."

She added, "We all share the same human biology and it's just so important that the incredible work that has been done by scientists internationally, including at Oxford University and across the globe, that the fruits of that endeavor and knowledge and expertise is shared in the way that good science would intend, and that means keeping all of our fellow human citizens safe and alive and well."

To date, over 230,000 vaccines, including over 151,000 first doses, have been administered in the Republic of Ireland.

It had initially been hoped that over-70s in Ireland would have been vaccinated by the end of March, but issues arose with supply and concern over the use of the newly arrived AstraZeneca vaccine in older people has pushed that deadline back to mid-May.

The U.K., on the other hand, has now vaccinated approximately 12.5 million, equating to one in four adults there.

However, it's hoped Ireland's new vaccine centers, which will include large hubs in Dublin, Cork, Galway and elsewhere, will accelerate the country's rollout of jabs when they get underway in the coming days.

Meanwhile, Ireland's construction industry has been given the green light to return to work early next month.

Even though the country remains in a strict lockdown, which includes a five kilometer travel restriction, many believe the restrictions have not gone far enough.

A hard-hitting public campaign, spearheaded by some of the country's leading scientists and academics, has urged the government to adopt a zero-Covid approach in its ongoing battle with the pandemic.

The Independent Scientific Advocacy Group admitted the stricter measures would not completely wipe out the virus from Irish shores, but would ensure there were no cases arising in the community from unknown sources.

On Tuesday, Taoiseach Micheál Martin spoke about reopening in the country and urged caution.

“We will be conservative and cautious in relation to any reopening. The objective is prolonged suppression of the virus to get the numbers down very low and keep them very low,” he said.