Bridging the Atlantic – The continued relationship between Ireland and the US

The overall feeling from the second “Bridging the Atlantic – Ireland and the US” symposium was one of renewed optimism regarding the ongoing relationship between the US and Ireland. 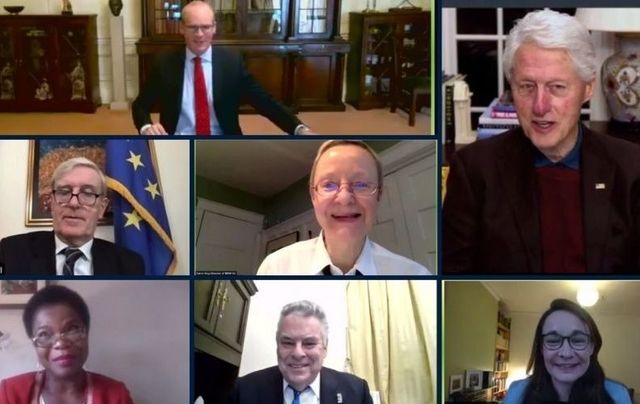 A look at the points raised by the key speakers during the second "Bridging the Atlantic - Ireland and the US" symposium that was hosted virtually in November.

*Editor's Note: This column was submitted to IrishCentral by Selena Chester, MBBS after the second Bridging the Atlantic symposium, which was presented by  Global Irish Studies and the BMW Center for German and European Studies at Georgetown University in conjunction with the Clinton Institute at University College Dublin, the William J. Clinton Leadership Institute at Queen’s University Belfast, the Washington Ireland Program, and the Embassy of Ireland USA.

In season four, episode one of the popular Netflix series “The Crown,” we see Prince Charles informed of the death of his great-uncle and confidante, Lord Mountbatten, at the hands of the IRA. This year also marks the 100th anniversary of “Bloody Sunday,” when British forces opened fire during a Gaelic football match at Croke Park, killing 14 and wounding at least 60 others.

These serve as brutal reminders of the many lives that were lost during The Troubles, or the Irish War of Independence, that raged through Northern Ireland, spilling across the border into the Republic and the rest of the U.K.

It is timely then, that, the second symposium “Bridging the Atlantic – Ireland and the US” was held, on Tuesday 17th November, with the aim of “deepening connections and understanding between academics, analysts and policymakers on either side of the Atlantic.” It brought together notable speakers from the US and Ireland to “consider relations between the two nations."

Former US President Bill Clinton pre-recorded a video message for the symposium, during which he emphasised the need “to step back and remember that a whole generation has grown up without knowing the horrors of secular violence.” It is this peace achieved by the Good Friday Agreement that has held since its inception in 1998.

However, the murder in April 2019 of journalist Lyra McKee, and other isolated acts of violence in Northern Ireland on both sides of the divide, make it clear that tensions continue to simmer beneath the surface.

During the symposium, the central role that the US played in brokering the Good Friday Agreement was emphasised and questions were asked as to what role the US will continue to play in ensuring its integrity is maintained. The result of the US election, with Joe Biden reaffirming his commitment to the Good Friday Agreement in the context of Britain’s hopes of securing a trade deal with the US, once again puts the influence of the US on this area of foreign policy into the spotlight.

Brendan O’Leary, Professor of Political Science at the University of Pennsylvania, expects a Biden presidency to strengthen the EU-US alliance and argued that Biden’s familiarity with the obligations of the agreement means that the UK won’t be able to “gloss over” the infringement of international law as the result of last-minute changes that have been made to the Brexit withdrawal agreement.

US Congressman Richard Neal, the current chair of the Congressional Friends of Ireland, emphasised that all political parties are “singing from the same hymn sheet” as far as Ireland is concerned.  He emphasised the importance of maintaining the fluidity of the border between Northern Ireland and the Republic of Ireland, as enshrined in the Good Friday Agreement.

Senator Hon. Pete King emphasised the concessions made on all sides that made the Good Friday Agreement possible, which underlines what is at stake as a result of the potential instability caused by Brexit.

Simon Coveney, Ireland’s Minister for Foreign Affairs and Trade, argued that the Good Friday Agreement is “one of the great foreign policy achievements of the US” and that what he sees in the future of US-Ireland relations is “firmness, renewed resolved, recognition of the need to protect what we have created, and also to recognise its vulnerability.”

Indeed, it may be that the influence of Joe Biden’s election has been felt sooner than expected and that many of the predictions made by the speakers during the symposium have already proved to be true, as on the 8th of December, Michael Gove, one of the UK’s chief Brexit negotiators, met with the European Commission and agreed to remove controversial clauses from the internal market bill that many feared would create a hard border on the island of Ireland.

This was welcomed by Simon Coveney, who tweeted that this represented “good progress” and “would provide some certainty on the implementation of the Northern Ireland protocol.”

Good progress! - will finally provide some certainty on implementation of #Brexit Protocol in Northern Ireland. Practical cooperation & flexibility has been agreed to make it as manageable as possible for people and businesses. https://t.co/QKkOlx37Cl

Professor Liam Kennedy, Director of The Clinton Institute at University College Dublin emphasised that no one is being asked to take sides on Brexit, but many in Ireland are asking the US to safeguard the Peace Process that it helped to create.   He argued that Brexit is “awkward, difficult and was not fully understood in terms of its consequences for the relationship between the United Kingdom and The Republic of Ireland.”

The emotional connection between the US and Ireland

The symposium moved away from the issue of Brexit, and went on to discuss the emotional connection between the US and Ireland, and how this relationship can be maintained for future generations.

Caitriona Perry, broadcast journalist with RTE and author of The Tribe: The Inside Story of Irish Power and Influence in US Politics (2019), spoke of how the “annual green take-over of one of the most powerful nations in the world” on St. Patrick’s Day makes Ireland the envy of many other nations and emphasised that it’s important for future generations to think about how to preserve the relationship, particularly with the aging Irish American community, who are becoming more distant from their ancestral home with each generation that passes.

Simon Coveney reaffirmed Ireland’s commitment to building a “global family of Irish descent” as part of the Diaspora Strategy that has been launched by the Government of Ireland in 2020. In Coveney’s view, Joe Biden is “emotionally connected”’ to Ireland, and has a relationship with the Peace Process. He looks forward to seeing how Ireland can maximise the potential of the relationship it has with the US, and highlighted the role that Ireland can play in helping the US to achieve their policy aims in areas such as climate change, and the promotion of multilateralism.

Congressman Richard Neal believes that the relationship between Ireland and the US will be of benefit to both countries, as the US gets to grips with the challenge of global leadership, pandemic recovery, and international trade. Ireland’s membership of the UN security council means it will have greater power as an international actor to exert influence in these areas.

The overall feeling from the symposium was one of renewed optimism regarding the ongoing relationship between the US and Ireland. It is clear that the UK should expect to be held to account in any future negotiations with the EU which may threaten the integrity of the Good Friday Agreement by a country it is hoping to trade with much more closely in the future. This is true in part because of Joe Biden’s Irish ancestry, but also because of the wider connection between Ireland and the US, and the key role it played in brokering the Good Friday Agreement.

The question posed by many of the speakers during the symposium was how to maintain this connection for future generations. Dr. Thomas Wright, director of the Center on the United States and Europe spoke of the need to sustain the power of the Irish diaspora in the US, and this was echoed by Daniel Mulhall, Ireland’s Ambassador to the US, who argued that the US has a deep affinity with Ireland, which encompasses art, music and culture, as well as politics.

It is this affinity that he feels will maintain the US-Irish connections for generations to come, and what the Government of Ireland’s Diaspora strategy 2020-2025 seeks to build on as it seeks to “renew a meaningful connection” with Irish diaspora around the world.

You can watch back on the entire Bridging the Atlantic symposium, which was hosted on November 17, 2020, here: