Irish American opinion is clear a border poll should be held by 2030. The debate must start now. 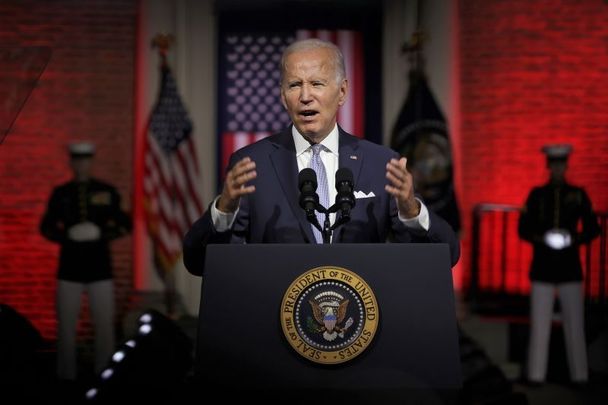 Both Joe Biden and Bill Clinton are expected to be in Northern Ireland next April to pledge allegiance to the full implementation of the Belfast Agreement on its 25th anniversary.

It is hard to gauge what state of flux Northern Ireland and the UK generally will be in by April, even if the Brexit protocol issue is finally put to rest and a Northern Ireland Assembly is up and running. Doubtless, the debate on the potential timing and format of a united Ireland poll will still be front and center.

Irish American opinion is very clear that a poll should be held by 2030 and the debate must start now.

Why 2030? Because the shifting population numbers will show the end of the unionist majority from a demographic and political sense.

No longer will unionists be able to dictate and overrule. If there is a solution, it can only be won through a ballot box, not by threats and intimidation from any side.

That needs to be said. The Democratic Unionist Party’s (DUP) current tactic of hollowing out the Belfast Agreement cannot be allowed to succeed either. It no longer controls the numbers or the narrative.

Given the new reality, there have been a number of large meetings recently in Irish America on the issue of a united Ireland poll amid a sense of wonderment that the British government has been so cavalier and dismissive of Irish concerns that they have brought the issue down around themselves.

The irony of the fact is that the issue of Northern Ireland had slipped down the scale in America. It was English nationalism, as exhibited in the attempted Brexit bullying of the Irish Government, that breathed new life into the debate.

The Irish-American argument is clear – partition did not work for 100 years, and must be replaced permanently at some point in the new century.

Now there is a duty on all sides to come up with a fair and lasting solution to win cross-community support North and South and among the Irish diaspora as the Belfast Agreement did.

It is a huge undertaking. The Irish Government’s Shared Island initiative is a familiar formula, but it does not represent a solution.

Despite every effort over the past few decades by successive Irish and US governments to create an economic investment incentive for North-South cooperation, unionists have seen these moves, not unreasonably, as greenmail, an attempt to slip all-Ireland solutions and institutions in under the radar.

What then represents a solution? If the putative 2030 poll shows a majority in Ireland favor unity, perhaps the best way to grasp the nettle is to seek a legal and binding transference of jurisdiction over Northern Ireland from Britain to Ireland with every assurance possible, set in stone, to unionism that their rights would be legally safeguarded in a new Ireland. They must be offered the most generous terms.

“People’s identities, to the extent that they matter, should be as freely chosen as possible.” writes Prof Brendan O’Leary, a conflict resolution expert whose new book, Making Sense of a United Ireland, could well become the roadmap to a solution to the unity issue. O’Leary played a big role in helping the transition from the RUC to the Police Service of Northern Ireland and helped write the Kurdish constitution.

The expected Irish arrival in April of the American presidents and Mitchell is also timely as a reminder of what a neutral entity such as the US can accomplish in helping with a solution.

First, the American delegation will also be seeking the same assurance in the short term from the British government that they do not allow Brexit or other machinations to destroy the Belfast Agreement which was so hard fought for on all sides.

Irish Americans correctly believe they still have a role to play in securing the peace. They are fiercely proud of their role in securing the agreement, most notably by first bringing then-candidate Clinton on board.

They will also be very active next year both in Congress and across the Irish-American community, reinforcing the need to fulfill every promise made in the Belfast Agreement document, and pressing the point that there is a duty on all sides to come up with a fair and lasting settlement in the event of a border poll showing a preference for unity.

For the British government, the likely US cavalcade next April will be an unwelcome intrusion, even though the public praise will be effusive.

The Belfast Agreement has become, to American leaders, a beacon of success in a sea of foreign policy troubles. The US role in bringing peace to the North remains a matter of deep satisfaction.

Look for Bill Clinton to move beyond pleasant reminiscences when he comes to the North in 2023. He views Ireland as a huge part of his legacy, a fact borne out by Prof Russell Riley, who was one of the academics who interviewed Clinton for a University of Virginia oral history project in 2010.

When he asked Clinton what part of his legacy was especially important to him, Riley recalled, “Ireland was immediately the thing. He [Clinton] said, ‘This is what we need to do.’”

President Joe Biden was not a central figure in the original early 1990s Irish-American contribution to peace. He was helpful but, like all other senators at the time, knew it was almost a sacred issue for Senator Edward Kennedy who owned the Irish brief.

But this is a different era and Biden has grasped the torch, defending and elevating the Belfast Agreement at every opportunity. He even took the extraordinary step of having his state department issue a démarche to the British embassy in Washington.

After the démarche was issued, national security adviser Jake Sullivan stated, “President Biden has been crystal clear about his rock-solid belief in the Good Friday [Belfast] Agreement as the foundation for peaceful coexistence in Northern Ireland.”

Once again, the US will seek to provide space and a powerful voice for peace and an agreed solution. Ireland is lucky to have such friends on this issue.

* This article was originally published in the Irish Times on Nov 2.