Remembering Dr. Kevin Cahill, another pillar of the Irish American community who passed away on September 14 in New York. 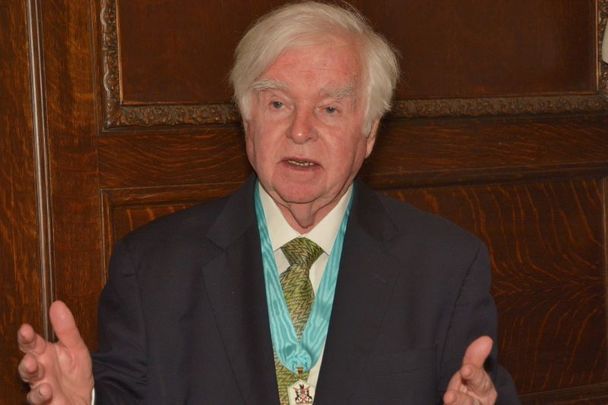 Dr. Kevin Cahill, who died last week, was an extraordinary man. I counted him among my closest friends ever since the day 30 years ago I knocked on his door in Manhattan as a new patient for the first time.

He escorted me into his study where a beautifully illustrated poem by W.B. Yeats was hung, along with numerous other Irish artifacts. He engaged me in a long discussion about Irish life and literature.

It was the first of many such talks. He had an innate wisdom to him that came from his professional training and razor keen intellect.

His waiting room alone was a testament to the renaissance man with a deep and abiding love of literature, a close friend of great artists such as Seamus Heaney and Leonard Bernstein, Liam Neeson, and Robert De Niro.

Yes, Kevin had a major ego, with good reason. The first picture I noticed in his surgery was himself with the Pope, the second with President Reagan. This was no ordinary doctor.

Scattered around the room were numerous other mementos, including many from Africa where he had set up 65 different medical programs, and India where he worked with Mother Teresa. He became known far and wide as a tropical disease expert.

Another stellar accomplishment of his was that in 1983 in New York he set up the first ever AIDS conference.

He had the credentials to speak from strength. As New York Health Commissioner under Governor Hugh Carey, he transformed the state medical services for the better. He never dodged a fight back then and was the scourge of the bureaucracy.

My first meeting with him was the beginning of a long and treasured friendship that, very unfortunately, ruptured a year or so ago over his plans to sell the American Irish Historical Society, the beautiful building on Fifth Avenue he had single handedly saved back in the 1970s.

But there were 30 years of friendship in between. His assistant, Joan Durcan, was as decent as they come, an old fashioned Irish woman from Sligo who was beloved by all who came to know her. She was the type of person who, in her spare time, used to feed AIDS victims in their homes because no one else would do it.

Over the years I sent Kevin many patients, nothing he should have been too thankful about as all were undocumented young immigrants with serious problems and no money to afford any doctor, let alone a Fifth Avenue physician. Kevin happily treated every one of them for free.

He was no saint. He could be very arrogant, demanding, difficult, especially if it concerned his beloved society.

Over the years, the unfortunate aspect was he began to regard the American Irish Historical Society as his creation to do with what he wished. Family members dominated the board and the society as a whole suffered as a result.

I tried to get him to open up the board and make the society truly a jewel in the Irish community but Kevin, unwisely, had drawn a line in the sand when it came to what he saw as his society.

But that was towards the latter end of his career, after his beloved wife Kate had passed and then Joan too. Kevin lost two great pillars of support.

In the end, the fate of the society has fallen to New York State Attorney General Letitia James to adjudicate. Kevin was also sued for sexual harassment, a charge he fully denied.

So another pillar of the Irish American community has passed. He was a controversial figure who lived a full life.

As The New York Times noted, he managed to pack several careers into a single life. May he rest in peace.