British amnesty proposals for Troubles-era legacy matters are "about hiding and concealing the truth, not healing and reconciling society," writes contributor Ed Neafsey. 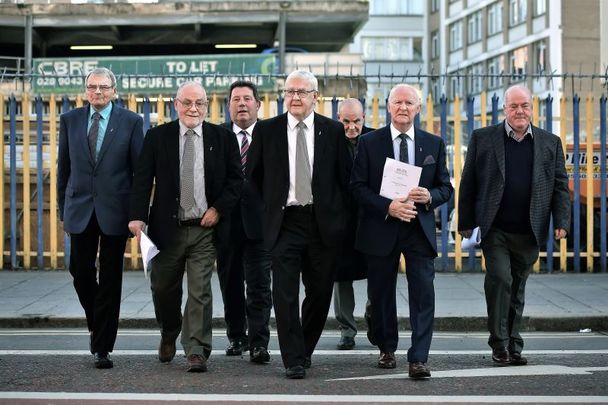 March 20, 2018: Jim Auld, Patrick McNally, Liam Shannon, Francis McGuigan, Davy Rodgers, Brian Turley and Joe Clarke, known as the 'Hooded Men,' make their way from a press conference after giving their reaction to the European Court of Human Rights' decision in their case in Belfast, Northern Ireland. The ECHR rejected a request by the Irish government to find that the men who were detained during internment in 1971 were tortured by the British army. The 14 men allege they were forced to listen to constant loud music, deprived of sleep, food, and water, and forced to stand in a stress position and beaten if they fell. Getty Images

Recently, two Northern Ireland court cases highlighted the problem with United Kingdom (UK) Prime Minister Boris Johnson’s proposal to “draw a line in the sand” on investigating legacy cases through legislation establishing a statute of limitations for all cases occurring before the 1998 Belfast/Good Friday Agreement (GFA).

The proposal is unjust and nefarious. If enacted, the law would end Troubles-legacy investigations, prosecutions, inquests, and civil cases, which Johnson falsely claims would bring “healing” and move Northern Ireland “further along the road to reconciliation.”

The first case involves the 1975 Miami Showband Massacre. Two survivors and the families of two of the victims who were killed reached a settlement with the UK Ministry of Defense and the Police Service of Northern Ireland (PSNI) in the Belfast High Court. Under the settlement, they will each receive more than 300,000 pounds.

The other case involves the mistreatment of the 14 Hooded Men who were subjected to the five techniques of interrogation during internment in 1971. The UK Supreme Court ruled a PSNI decision to not investigate the matter based on new evidence - the discovery of a memorandum (known as the Rees memo) which “referred to the use of torture and to its approval by UK ministers” - was “irrational.” The Supreme Court “quashed” that decision, and imposed an obligation on the PSNI to investigate the torture allegation.

Before analyzing these cases, it is worth considering the scope of the proposal to end Troubles-legacy investigations and cases, and the reaction to it. More than 3600 people were killed during the Troubles. 3,000 of those murders remain unsolved. At present, the PSNI legacy branch has a caseload of 1130 investigations into unsolved murders. The number of coroner inquests into unlawful killings is 36. More than 1,000 civil claims related to Troubles deaths and injuries are pending in court. Finally, and significantly, 5 criminal cases against soldiers, including the Bloody Sunday case, are being prosecuted. All of these maters would be over if the proposal becomes law.

The proposal violates human rights norms because a statute of limitations serves in effect as a grant of amnesty for crimes committed prior to the GFA, and it reneges on UK commitments made in the 2014 Stormont House Agreement. These legal problems make clear why it is opposed by the Irish government and every political party in Northern Ireland. The national Ancient Order of Hibernians criticized the proposal, rightfully calling it an evasion of legal responsibilities; and members of Congress voiced their disapproval in a bipartisan letter that called out the proposal for denying victims “the truth, justice, and accountability to which they are entitled.”

Victims’ groups have uniformly expressed outrage in condemning the grant of amnesty, referring to it in a number of public statements reported in various news outlets as “immoral and abhorrent to any civilized society,” a cause of “re-traumatization,” a “perversion” of the criminal justice system, and a “cynical” way “to bury war crimes.” So much for the stated goal of fostering healing.

The Miami Showband was one of the most popular music groups on the island of Ireland in 1975. One night, after a performance in Northern Ireland, they were stopped at the border on their return to Dublin. According to IrishCentral, members of the paramilitary Ulster Volunteer Force (UVF) and the Ulster Defense Regiment (UDR), “wearing British army uniforms, stopped the band’s van and forced the band members to line-up at the side of the road.” The attackers placed a bomb in the van that exploded prematurely. Two UVF men were killed. The rest of the gang then shot the band members, killing three and seriously wounding two. The UDR men were convicted of the murders.

BBC News reported that one of the Miami Showband survivors, Stephen Travers, told the court the images of that night are “ever-present” for him. The other survivor told the court - “that night will live with me until the day I die.” Painful descriptions of daily suffering under the lasting scars of that night. Even the judge was moved by what he heard.  He said, “the comments expressed will remain with me throughout the rest of my career.”

For the Miami Showband Massacre survivors, there is no escaping the evil they experienced. Nor can it be wiped away by the mere drawing of a line in the sand.

After the court hearing, Travers called the settlement an acknowledgment by the government of collusion. It took nearly 47 years for that truth to come out, and justice to be rendered to the survivors. If the proposal becomes law, cases like this would end.

It is important to note that the dead UVF men belonged to the Glenanne Gang. The Glenanne Gang has been implicated in 120 sectarian murders, and is the subject of a court-ordered investigation into UVF collusion with State security forces. If the proposal is enacted, that investigation will be over and evidence of collusion will be swept under the rug and hidden from public view.

The Hooded Men have been waiting five decades to learn the truth about their case. Their ordeal began more than 50 years ago when they were detained at a military base in Co. Derry during an internment round-up and subjected to the five techniques of interrogation: hooding at all times except during questioning; wall-standing in stress positions and beatings when they fell; denial of food and water; sleep deprivation; and exposure to continuous noise. The impact of hooding was intensified for some of them when they were tossed out of helicopters which they were told were hundreds of feet in the air but were in fact hovering close to the ground.

In 1978, the European Court of Human Rights (ECHR) ruled in the Irish State Case that the five techniques were inhuman and degrading but “not torture.” The Rees memo, however, was withheld from the ECHR. It was not uncovered until 2014.

The Supreme Court noted that no one has been the subject of criminal charges for what happened to the Hooded Men. Engaging in conduct that constitutes torture, however, is a crime, which the Court says must be investigated by the PSNI. The essence of the Court’s ruling is that the torture victims in the Hooded Men Case deserve the truth.

Even if a criminal prosecution is not the end result of the investigation, determining who authorized the use of torture and how high up in the government this criminality went is a measure of accountability. Of course, if Johnson gets his way, these questions will not be answered.

And that may be the proposal’s real purpose. It’s about hiding and concealing the truth, not healing and reconciling society. Johnson needs to study history. Truth, acknowledgment, and accountability are the foundation of a reconciled society.

Denying people truth and justice doesn’t foster healing. It fosters hurt and bitterness. It doesn’t foster unity. It fosters separation. It undermines the rule of law and public trust in government. But these matters may not be of importance to him?