Pennsylvania Congressmen Brendan Boyle (D) and Brian Fitzpatrick (R) have sent a bipartisan letter to Johnson condemning his plans to grant amnesty for all Troubles-related crimes. 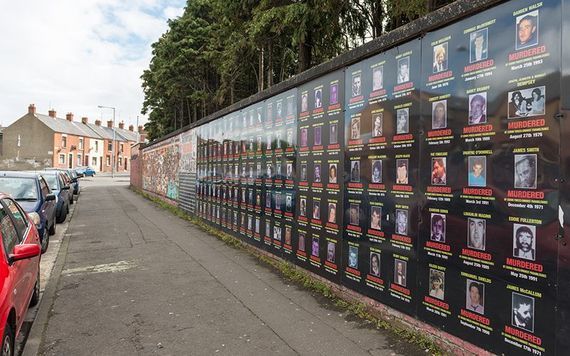 A memorial wall along Beechmount Avenue in Belfast, dedicated to Catholics killed during the Troubles. A sign on the wall states that it is "dedicated to the families who have fought and are still fighting for truth and justice for their loved ones. It is also dedicated to all those who have died as a result of state-sponsored killings." Getty

Dozens of US Congress members have sent a bipartisan letter to UK Prime Minister Boris Johnson denouncing the UK Government's plans to terminate criminal investigations and prosecutions for crimes that took place during the Troubles.

Pennsylvania Congressmen Brendan Boyle (D) and Brian Fitzpatrick (R) have sent a bipartisan letter to Johnson condemning his plans to renege on commitments made under the Stormont House Agreement signed in 2014.

The letter calls on the UK Government to reverse its decision to grant amnesty for all Troubles-related killings in Northern Ireland.

Boyle had initially pledged to send a letter to the UK Government over the plan to end Trouble-related prosecutions during a webinar hosted by the Ancient Order of Hibernians Freedom for All Ireland Chair Martin Galvin. The fraternal organization has welcomed the move to petition the UK Government to reverse its decision.

The British Government's plan to introduce a statute of limitations on all prosecutions, legacy inquests, and civil actions for Troubles-related killings and other crimes was first announced during the Queen's speech in May this year.

The plan was announced on the same day that a British coroner's inquest ruled that ten people killed in Ballymurphy by British troops in 1971 were "entirely innocent of wrongdoing".

A total of roughly 1,700 Troubles-related crimes await investigation in Northern Ireland and the UK Government had previously committed to dealing with the unresolved legacy of the Troubles when it signed the Stormont House Agreement in 2014.

All major parties in Northern Ireland have denounced Johnson's proposal to renege on the agreement.

In their letter to the UK Government, Boyle and Fitzpatrick said that they were disappointed by the unilateral step to end all Troubles-related legacy inquests.

"We are disappointed to learn that instead of taking constructive steps to fulfill these promises, British Parliament plans to introduce new legislation that would modify Stormont House Agreement legacy laws and institute a ban on legacy inquests and prosecution of former soldiers who served in Northern Ireland during the conflict," the letter states.

"To be clear, we strongly disapprove of these proposals. We believe that they would not only prevent a pathway to justice but that they would also strip these families of their legal rights protected under European Law and the Good Friday Agreement."

The AOH thanked Boyle and Fitzpatrick for their efforts and expressed hope that the letter will make the issue a priority when President Joe Biden meets with Johnson next week.

"We are hopeful that this will put the issue of the long-overdue resolution of the legacy of the conflict in Northern Ireland with justice at the top of the planned discussion between the President and the Prime Minister next week," the AOH said in a statement.