In July, Northern Ireland Secretary Brandon Lewis announced proposals to introduce an official pardon to all prosecutions for Troubles incidents up to 1998. 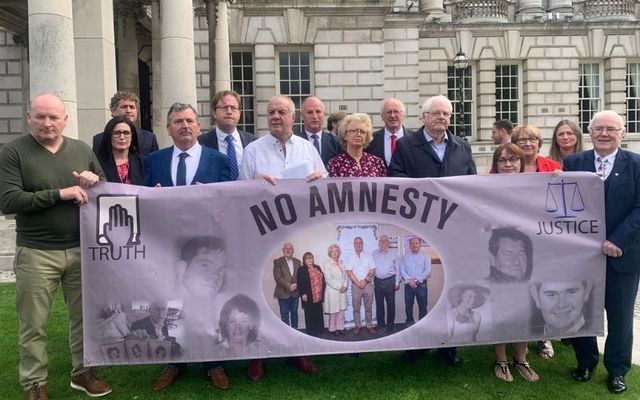 Families of Northern Ireland Troubles victims have hailed the signing of the document rejecting the UK Government's amnesty proposals as a “historic day”.

Representatives from all the major parties in both Belfast and Dublin have signed a document outlining their rejection of the UK government's proposals to introduce an "amnesty" (an official pardon) for legacy killings.

A delegation of TDs and senators – as well as members of the DUP, Sinn Féin, the SDLP, and Alliance in Northern Ireland – met with the cross-community group of victims’ campaigners in Belfast yesterday, August 30.

The action comes after Northern Ireland Secretary Brandon Lewis put forth proposals in July to address the legacy of the past in Northern Ireland. His report features three key proposals: a new independent body to “focus on the recovery and provision of information about Troubles-related deaths and serious injuries;” a “major oral history initiative;” and a statute of limitations to apply equally to all Troubles-related incidents.

Speaking outside Belfast City Hall on Monday, Senator Daly, Cathaoirleach of Seanad, said: "We believe victims and their families are entitled to the justice, truth, and accountability they deserve.

"I have spoken to members of the European Parliament, the (US) Congress, to get their support and they are willing to support the victims and families to ensure that they get the justice that they deserve."

Fianna Fáil TD James Lawless, Chair of Irish Justice Committee, said that "there can be no statute of limitations on criminal activities, regardless of the perpetrators."

I joined reps from across the island at Belfast City Hall today to express our unified opposition to British Government proposals to close down historic inquires and grant general amnesty. Families of victims deserve the truth and to know what happened to their loved ones. pic.twitter.com/AtUXKWXcXc

Among the victims' relatives who were present in Belfast on Monday was Raymond McCord, whose son Raymond Jr was murdered by loyalist paramilitaries in 1997.

McCord, who said the new document rejecting the amnesty proposals is as important as the Good Friday Agreement, said: "The British government has no choice now. Every major political party in Ireland now support this, they can't ignore that. The victims' groups in England is supporting us as well.

"People in the UK and Ireland support this. Boris Johnson is taking on all of the people now.

"It's not an orange or green issue, or unionist or nationalist, it is the victims.

"I want to see Dublin parties and the Taoiseach on board, I want to see the EU on board and the Americans come on board."

Billy McManus, whose father was killed in the loyalist attack on Sean Graham bookmakers in 1992, said there are plans to hold a demonstration outside Downing Street next month.

McManus said the proposed legislation makes a “mockery” of the thousands of people who were killed during the Troubles.

“It dances on the graves of our loved ones who were murdered,” he added.

Julie Hambleton, who founded Justice for the 21 after her sister was killed in the IRA's pub bombings in Birmingham in 1974, said that the amnesty proposals are "obscene" and that the victims stand as one.

“We stand as a voice for those who are not here to speak for justice and truth and accountability for themselves," Hambleton said, adding, "There is no justification, no moral or ethical justification for any government, particularly in Westernised society, to try and implement such a piece of law.”