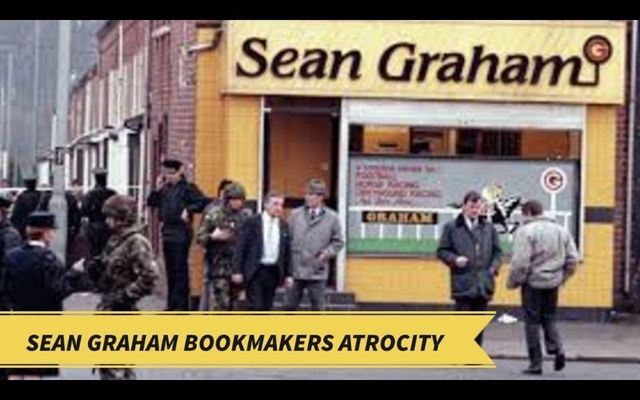 The Ancient Order of Hibernians (AOH) will host a webinar on Sunday, February 28 at 2 pm EST. The event is free and open to the public.

The AOH's live webinar discussion "Sean Graham Bookmakers Atrocity" will consider the PSNI's "harassment of survivors and families of victims of an infamous loyalist atrocity" and will be streamed from 2 - 3:30 pm EST on Sunday, February 28:

Ahead of the webinar, Martin Galvin, the National Freedom for All Ireland chairman, issued this statement on behalf of the AOH: "Twenty-nine years after a sectarian attack claimed the lives of five nationalists, including a 15-year-old boy, at Sean Graham's bookmakers shop on Belfast's Ormeau Road, the PSNI constabulary's treatment of survivors and victims' relatives holding a wreath-laying memorial has provoked a major crisis in confidence in the PSNI.

“Mark Sykes, wounded in the attack and arrested by the constabulary, will join victim’s son Billy McManus and Andree Murphy of Relatives for Justice to give a live webinar briefing to Irish Americans. The broadcast will be hosted by the Ancient Order of Hibernians in America with guests from other Irish American organizations, including the Irish American Unity Conference, Brehons, Irish Northern Aid, and Ladies AOH invited to participate.

"Billy McManus' father Willie aged 54 was murdered along with Jack Duffin aged 66, Christy Doherty aged 52, Peter Magee aged 18, and James Kennedy aged 15. He witnessed facts pointing to crown force collusion in the massacre, and has been deeply involved in the campaign for truth and justice. He was also one of the organizers of the wreath-laying ceremony targeted by the PSNI.

“Mark Sykes survived the massacre despite being shot seven times. His arrest, in front of his own family and other victims’ relatives, not only traumatized those in attendance but has led to new questions about whether the PSNI would ever deliver legacy justice.

"Andree Murphy of Relatives for Justice will discuss the status of the long battle for truth by these families, and why this incident has such wide-reaching political implications.”

Galvin continued: "The attack on Sean Graham's bookmakers is regarded as a clear case of crown force collusion with loyalists. Checkpoints by both the Royal Ulster Constabulary and Ulster Defense Regiment were set up near the scene, then withdrawn in time for the attack.

"Suspects were identified by eyewitnesses or forensic evidence, but never brought to trial. A British Army-issued Browning pistol and a rifle imported by British Army agent Brian Nelson were used to carry out the murders. Ballistic evidence was suppressed. The constabulary repeatedly withheld documentary evidence from an Ombudsman investigation.

“The PSNI has arrested investigative journalists for making a documentary film about Loughinisland, No Stone Unturned, which identified loyalist killers the PSNI would not charge despite overwhelming evidence.

"Now they arrest a wounded survivor of the Sean Graham massacre, in front of other survivors and victims' family members, but never charging the killers despite eyewitness identifications, ballistic and forensic evidence.

“The Good Friday Agreement spoke of policing 'capable of attracting and sustaining support from the community as a whole.’  How can the nationalist community be expected to join and support a constabulary which delivers only a No Stone Unturned brand of legacy justice."

You can register for the AOH webinar on Sunday, February 28 here.