The Ancient Order of Hibernians has thrown their clout behind former Congressman for this key Northern Ireland role. 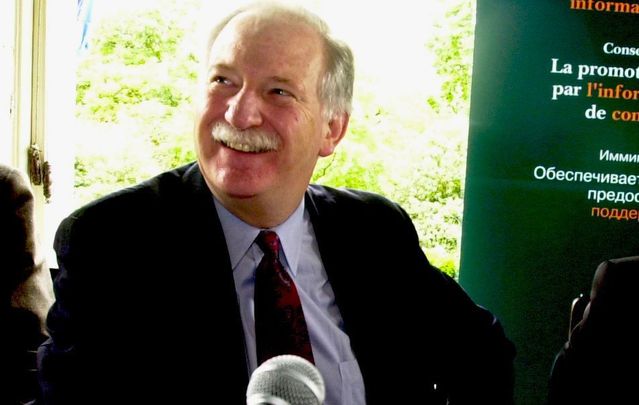 In a major development, America’s largest Irish organization, the Ancient Order of Hibernians, has thrown their clout behind peacemaker and Morrison Visas creator former Congressman Bruce Morrison for the position of Special Envoy to Northern Ireland.

Daniel O’Connell the National President of the AOH has written to incoming National Security Advisor Jake Sullivan on behalf of his 50,000 members calling for former Congressman Bruce Morrison to be named Northern Ireland Special Envoy in the Biden administration

On behalf of the Ancient Order of Hibernians in America (AOH), I write to recommend former Congressman Bruce A. Morrison (D-CT) to serve as Special Envoy for Northern Ireland in the Biden Administration.

The AOH is the largest Irish organization in the United States with members in all 50 states and DC. We are known for our nonpartisan commitment to the Irish Peace Process.

The AOH knows Bruce well.  We have been working with him and observing his commitment to peace and justice in Northern Ireland since his service in Congress in the 1980s.

He was a champion for providing immigration opportunities to Irish citizens through the “Morison visa” provision in his bill, the Immigration Act of 1990.  This achievement has made him a household name in America and in Ireland.

Our organization awarded him the Sean McBride Award in 1993 recognizing his contributions in the cause of peace, justice, and the economic well-being of the Irish people.

During his years in Congress, he was a leader in seeking a just peace process in Northern Ireland.  He traveled there in 1987, meeting with leaders across the political spectrum.  He returned to report to the Congress and his constituents on the need for a change in the U.S. approach to “the Troubles.” His Congressional colleagues selected him to be a Co-Chair of the Ad Hoc Committee on Irish Affairs.

After leaving Congress following an unsuccessful run for Governor of Connecticut, he immersed himself in advocacy for an active U.S. role in the developing peace process.  He traveled to the North again in the winter of 1992 to meet with many political and community leaders, including loyalists, unionists, nationalists, and republicans.

He searched for ways that the U.S. could promote a just resolution of the conflict.  After that trip, he approached his law school classmate, Presidential candidate Bill Clinton, urging him to commit to active involvement in Northern Ireland as President.

After Clinton’s election, he served as an informal advisor to the administration and made numerous trips with a small group dedicated to advancing the U.S. role in the peace process.  This work laid the groundwork for the appointment of George Mitchell as Special Envoy and his role in chairing the talks leading to the Good Friday Agreement (GFA).

His involvement did not end with the GFA.  He has actively engaged with each of the Envoys who have served over the past 22 years and met with a range of representatives of the government and community in Northern Ireland.  For the past two years, he has been Co-Chair (with former congressman Jim Walsh (R-NY)) of the Ad Hoc Committee to Protect the Good Friday Agreement.  That Committee has actively interacted with governmental and community leaders in Ireland and Britain regarding the challenge posed by Brexit to the GFA.  The Irish Ambassador to the U.S. specifically credited the Committee with helping to achieve the recent breakthrough agreement upholding the Northern Ireland Protocol in negotiations between the UK and the EU,

Bruce’s more than 35 years of deep involvement with the Peace Process makes him uniquely qualified to assist the Biden Administration in the role of Special Envoy, President Biden’s deep personal roots in Ireland and his long standing personal support for peace with justice in Northern Ireland make this position one that should have an occupant who can match the President’s level of experience and commitment.  Bruce has shown the diplomatic skill to be a force for peace as well as an advocate for justice.  Few can match this record.

Further, the job of Special Envoy for Northern Ireland has a domestic aspect, as well.  Irish America cares deeply about what happens in Northern Ireland.  It expects to be engaged by the Envoy, with regular reports on the situation and opportunity for input.  This has been an essential aspect of the position since the GFA. Bruce understands this part of the job.  He has been a leading participant for Irish America in interacting with prior Envoys.  His work on Irish immigration and the Peace Process over 35 years give him credibility and accessibility that will help the Biden Administration maintain these important links.

We recognize that the President faces many challenges in assembling his Administration. We know President Biden understands the urgency of appointing a new Special Envoy to the North of Ireland. We know that he is deeply concerned about what happens in Ireland.  He could make no better decision than to enlist Bruce in the role of Special Envoy to help him do so.

National President of the Ancient Order of Hibernians in America.