Freedom for All grants presented by Ancient Order of the Hibernians 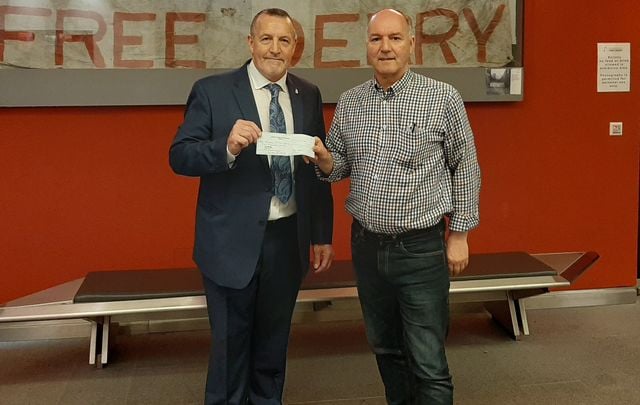 Malachy McAllister presents a check to Tony Doherty at the Museum of Free Derry.

Leading figures from each grant recipient joined in a zoom webinar conference on September 19, telling Hibernians from across the United States about each group's work and how much they count on American financial help.

The grant checks were personally delivered in Belfast, Derry, Tyrone, and Down by recently deported AOH member Malachy McAllister.

Each year the AOH and LAOH make a Christmas appeal to award grants to groups working for complete and absolute independence, peace, and unity for all Ireland. The categories include supporting former Republican political prisoners; truth and justice groups; cross-community initiatives; Irish culture, heritage, and language; preserving Irish Republican history; and cross-border programs. Groups applying for donations from the FFAI appeal must submit applications that include a question on how they promote freedom for all Ireland.

Previous years' presentations were only seen by  Hibernian officers and members able to travel to Ireland. In what AOH National President Danny O'Connell termed a "history-making first,"  Hibernians across America watched speakers representing 17 grant recipients explain their work and why American help is needed. About half of the speakers assembled at the Felon's Club in Belfast, while others spoke from locations around the six counties.

O'Connell opened the program, noting the long commitment of the AOH-LAOH to this work. LAOH President Karen Keane said, “Promoting freedom for all Ireland is one of the  core reasons why the AOH and LAOH exist.”

Groups were introduced in turn by the respective presidents and FFAI chairs Martin Galvin and Dolores Desch.

Mark Thompson, on behalf of Relatives for Justice, said, “I have been on tours for the AOH-LAOH and seen the work and dedication behind these donations. The FFAI grants help fund our reports into collusion and British killings and bring legacy justice and truth to families who have been fighting for decades.”

John Kelly of the Bloody Sunday Families and Museum for Free Derry spoke of how badly the museum was hurt by being unable to open for visitors this year because of COVID restrictions, and how welcome American help is at this time.

"America was always with the Bloody Sunday families and without you, we would not be where we are today,” he said.

Galvin concluded by saying to the Irish grant recipients, “These contributions are made because Americans are inspired by you and your work for freedom for all Ireland. The AOH and LAOH are with you. We want to support you, and we take pride and satisfaction in being a small part of your tremendous efforts.

“We know that the coming year will present unprecedented problems for us in funding grants and in our political work for you, but our members are determined not to let you down."