The President of the European Commission said, if adopted as is, the UK's Internal Market Bill "will be in full contradiction to the Protocol on Ireland / Northern Ireland." 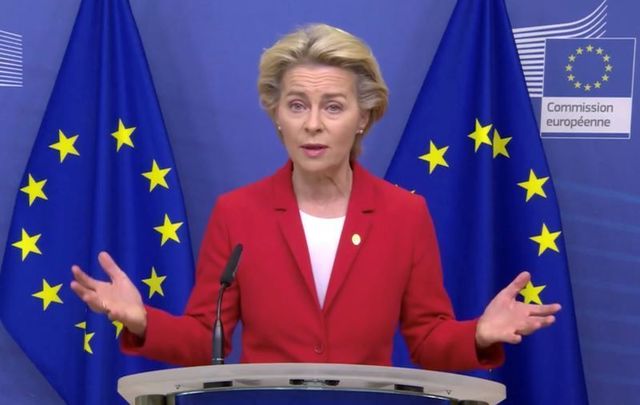 President of the European Commission Ursula von der Leyen told the press on October 1: “As you know, we had invited our British friends to remove the problematic parts of their draft Internal Market Bill by the end of September.

“This draft Bill is – by its very nature – a breach of the obligation of good faith laid down in the Withdrawal Agreement (Article 5).

“Moreover, if adopted as is, it will be in full contradiction to the Protocol on Ireland / Northern Ireland.

“The deadline lapsed yesterday. The problematic provisions have not been removed.

“Therefore, this morning, the Commission has decided to send a letter of formal notice to the UK government.

“This is the first step in an infringement procedure.

“The letter invites the UK government to send its observations within a month.

“The Commission will continue to work hard towards a full and timely implementation of the Withdrawal Agreement.

“We stand by our commitments.”

Press statement by President @vonderleyen on the implementation of the Withdrawal Agreement between the EU and the UK.https://t.co/Q1doAKnWFQ

The European Commission subsequently issued this further statement indicating that it had issued a letter of formal notice to the United Kingdom for breach of its obligations:

The European Commission has today sent the United Kingdom a letter of formal notice for breaching its obligations under the Withdrawal Agreement. This marks the beginning of a formal infringement process against the United Kingdom. It has one month to reply to today's letter.

On 9 September 2020, the UK government tabled a Bill (‘United Kingdom Internal Market Bill') that, if adopted, would flagrantly violate the Protocol on Ireland / Northern Ireland, as it would allow the UK authorities to disregard the legal effect of the Protocol's substantive provisions under the Withdrawal Agreement. Representatives of the UK government have acknowledged this violation, stating that its purpose was to allow it to depart in a permanent way from the obligations stemming from the Protocol. The UK government has failed to withdraw the contentious parts of the Bill, despite requests by the European Union.

The UK has until the end of this month to submit its observations to the letter of formal notice. After examining these observations, or if no observations have been submitted, the Commission may, if appropriate, decide to issue a Reasoned Opinion.

The Withdrawal Agreement was ratified by both the EU and the UK. It entered into force on 1 February 2020 and has legal effects under international law.

Following the publication by the UK government of the draft ‘United Kingdom Internal Market Bill' on 9 September 2020, Vice-President Maroš Šefčovič called for an extraordinary meeting of the EU-UK Joint Committee to request the UK government to elaborate on its intentions and to respond to the EU's serious concerns. The meeting took place in London on 10 September between Michael Gove, Chancellor of the Duchy of Lancaster, and Vice-President Maroš Šefčovič.

At the meeting, Vice-President Maroš Šefčovič stated that if the Bill were to be adopted, it would constitute an extremely serious violation of the Withdrawal Agreement and of international law. He called on the UK government to withdraw these measures from the draft Bill in the shortest time possible and in any case by the end of the month of September.

At the third ordinary meeting of the Joint Committee on 28 September 2020, Vice-President Maroš Šefčovič again called on the UK government to withdraw the contentious measures from the bill. The UK government on this occasion confirmed its intention to go ahead with the draft legislation.

The Withdrawal Agreement provides that during the transition period, the Court of Justice of the European Union has jurisdiction and the Commission has the powers conferred upon it by Union law in relation to the United Kingdom, also as regards the interpretation and application of that Agreement.

Later in the day on Thursday, President von der Leyen tweeted that she had met with Ireland’s Taoiseach Micheál Martin and said that they “share the view that the Protocol on Ireland/Northern Ireland is essential for maintaining peace & stability on the island of Ireland and protecting the integrity of the Single Market.”

Good discussion with @MichealMartinTD on #NextGenerationEU & ongoing negotiations with UK.

We share the view that the Protocol on Ireland/Northern Ireland is essential for maintaining peace & stability on the island of Ireland and protecting the integrity of the Single Market. pic.twitter.com/b9jtIJQLTm