US Special Envoy to Northern Ireland Mick Mulvaney says the US remains committed to "protecting" the Good Friday Agreement. 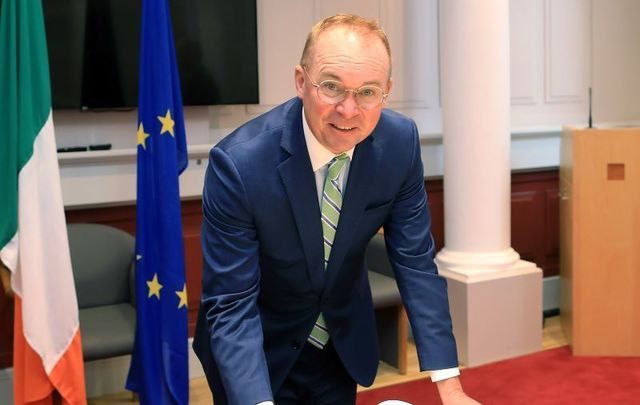 Mick Mulvaney, the US Special Envoy to Northern Ireland, is in Ireland and Northern Ireland this week as discussions continue surrounding The Good Friday Agreement and whether or not it is potentially threatened by the UK’s Internal Market Bill, which seeks to upend portions of the already agreed-upon Brexit Withdrawal Agreement.

Speaking with RTÉ News on Monday while in Dublin, Mulvaney said the US is “aware and cautious and watching the situation," but not yet concern about the matter.

"Concern would imply that we’re worried, and I don’t think we’re at that point yet," Mulvaney said.

“We certainly understand the interplay between the EU-UK trade deal, and the Internal Market Bill, and The Good Friday Agreement, which is mostly why I’m here.”

Mulvaney, who was named as US Special Envoy to Northern Ireland by President Trump in March after having served as the President's acting chief of staff, said that previous attempts to visit Ireland were delayed until now due to the pandemic.

“I think anyone who looks at the situation understands that there could be a series of events that could ultimately put the Good Friday Agreement at risk. Again, something that we’re very interested in seeing not happen in the United States - we are here to protect, defend that Good Friday Agreement that was so hard-fought and won.”

When asked if he and the US government still trust the British government despite them admitting that the Internal Markets Bill breaks international law in "a very specific and limited way," Mulvaney said: “I do, very much so, and I think the better choice of words is that it would break international law, not that it does. I read the thing, I think it’s accurately described as something that only kicks in if there isn’t a larger agreement.”

Regarding the letter that several bipartisan US politicians penned to UK Prime Minister Boris Johnson reiterating their support for The Good Friday Agreement, Mulvaney said he believed the action was "correct."

He said: “I think it’s accurate and I think the way that I read the letter … I think their attitude is, look, the British need to know that if a border goes up, all deals are off. At the end of the day, we will not tolerate - or at least we’ll do whatever we can - to prevent a return of the border between the Republic and the North.”

Mulvaney says he believes the US and the UK will be able to strike a trade deal. “One of the strange benefits, from our government’s perspective, of Brexit was that we can now enter into discussions on a free trade agreement with the United Kingdom.

“It will not move quickly, but it could move smoothly through the process. I do think we’ll have a deal with the British government at some point in the near future.”

You can watch Mulvaney’s interview with RTÉ News here:

Mulvaney separately told the Irish Independent that President Trump, who supported Brexit, “recognizes the complexities” when it comes to Ireland.

Mulvaney also said that Trump is “a fan of history” and that he “told me more about Gerry Adams than I knew about him myself.” Adams, the former president of Irish political party Sinn Féin, was a key player in the peace process negotiations in Northern Ireland in the 1990s.

He added: "It's not an immediate threat to the reinstitution of a hard border. Could it play a role in moving in that direction? Yes, which is why I'm here to reflect my government's commitment to the Good Friday Agreement."

Brandon Lewis, the Secretary of State for Northern Ireland who admitted the Internal Market Bill would break international law, commented on the Bill's progress on Tuesday:

The UK Internal Market Bill has its report stage & third reading today. It will guarantee companies can continue to trade seamlessly across the UK - unfettered access for NI businesses, protection of the GFA & continued prosperity for people & businesses across all four nations.