The soldier, identified as "Soldier F", was a member of the British Army's Parachute Regiment and was charged with the murders of Jim Wray and William McKinney. 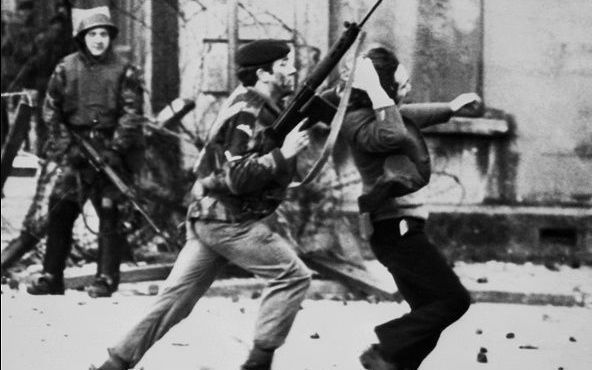 A British soldier shoves a civilian during Bloody Sunday in Derry. Getty

The only British soldier charged in connection with the murder of 14 civilians on Bloody Sunday in Derry will not stand trial.

The soldier, identified as "Soldier F", was a member of the British Army's Parachute Regiment and was charged with the murders of Jim Wray and William McKinney in addition to the attempted murders of five other civilians on Bloody Sunday.

The Public Prosecution Service (PPS) informed relatives of the victims on Friday that it will not be pursuing a case against the former soldier as there is no longer a reasonable prospect of securing a conviction.

Speaking on behalf of the families of the victims, solicitor Ciarán Shiels said that the families do not accept the decision and will mount a legal challenge against it.

"The decision communicated today to the victims of Bloody Sunday represents another damning indictment of the British justice system," Shiels said in a statement on Friday.

The Pat Finucane Centre, a non-profit human rights advocacy group fighting for victims of the Troubles, condemned the PPS over Friday's decision, stating that the verdict was an "insult".

"The collapse of the trials of soldier F for multiple murders & attempted murders, soldier B for the murder of Daniel Hegarty, points towards long term, systematic impunity by the British State whose only real concern is to protect themselves and their troops," the group said in a statement on Twitter.

1)The collapse of the trials of soldier F for multiple murders & attempted murders, soldier B for the murder of Daniel Hegarty, points towards long term, systematic impunity by the British State whose only real concern is to protect themselves and their troops.

PPS Director Stephen Herron met with the victim's families on Friday morning to inform them of the decision. Herron previously decided to prosecute the former soldier in March 2019.

Soldier F was identified in the Saville report - a public inquiry into the Bloody Sunday killings which stated that the former soldier had shot three people dead on January 30, 1972.

Lord Saville, who chaired the inquiry, imposed a ban on soldiers being referred to by name and recommended that letters be used to refer to former members of the Parachute Regiment.

Saville said in the report that he could confidently identify the soldiers involved in the killings on Bloody Sunday.

Meanwhile, a second former soldier - referred to as "Soldier B" - will not stand trial for the murder of 15-year-old Daniel Hegarty in the Creggan area of Derry during Operation Motorman in 1972.

Hegarty was shot twice in the head and killed when thousands of British soldiers broke through several "no-go areas" established by the IRA in July 1972.

Soldier B was charged with his murder and due to stand trial, but the PPS told Hegarty's family on Friday that there is no longer a reasonable prospect of securing a conviction.

The news comes two months after the case against two former soldiers charged with murder unraveled in Belfast. Soldier A and C were charged with the murder of IRA commander Joe McCann, but the charges were dropped when evidence deemed central to the case was deemed inadmissible in court.

Mr. Justice O'Hara, the trial judge at Belfast Crown Court, ruled that the statements that the former soldiers had given to the Army in 1972 and the Historical Inquiries Team in 2010 were not given under caution and therefore could not be used in court.

Ciarán Shiels said on Friday that the PPS had dropped the charges against Soldier F because of similar reasons.

"The reasons underpinning the PPS decision relate to the admissibility of statements made to the Royal Military Police in 1972 by a number of soldiers who were witnesses to events in Glenfada Park," Shiels said in a statement.

He said that the High Court is currently considering the admissibility of statements made to the Royal Military Police and that the PPS decision was premature.

"The admissibility of RMP statements in relation to the events of Bloody Sunday is a matter already under active consideration by the High Court, which will hear detailed legal argument over five days in September.

"In those circumstances, the decision by the PPS to halt this prosecution is clearly premature in the absence of a High Court ruling on the issue."

In May, the British Government announced controversial measures to introduce a statute of limitations on offenses committed before the signing of the Good Friday Agreement in 1998, limiting the scope of historical prosecutions.