The prosecution of former British paratrooper 'Soldier F,' who is accused of killing two civilians on Bloody Sunday, began on September 18 in Derry. 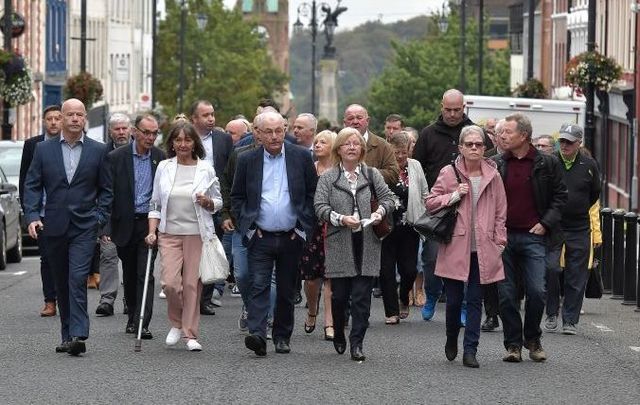 Family members of Bloody Sunday victims walked together to the courthouse in Derry on September 18. Getty Images

Victims’ families want "Soldier F" to be stripped of anonymity

The prosecution of "Soldier F," the British paratrooper accused of murdering civilians on Bloody Sunday, began on Wednesday in Derry.

The Guardian reports that Soldier F is accused of murdering James Wray and William McKinney, as well as the attempted murders of Patrick O’Donnell, Joseph Friel, Joe Mahon, and Michael Quinn. He faces a seventh supporting charge of the attempted murder of a person or persons unknown on the day.

On Sunday, January 30, 1972, the British Army’s Parachute Regiment opened fire on civil rights demonstrators in Derry City, killing 13 people and wounding another 15, one of whom died some months later. 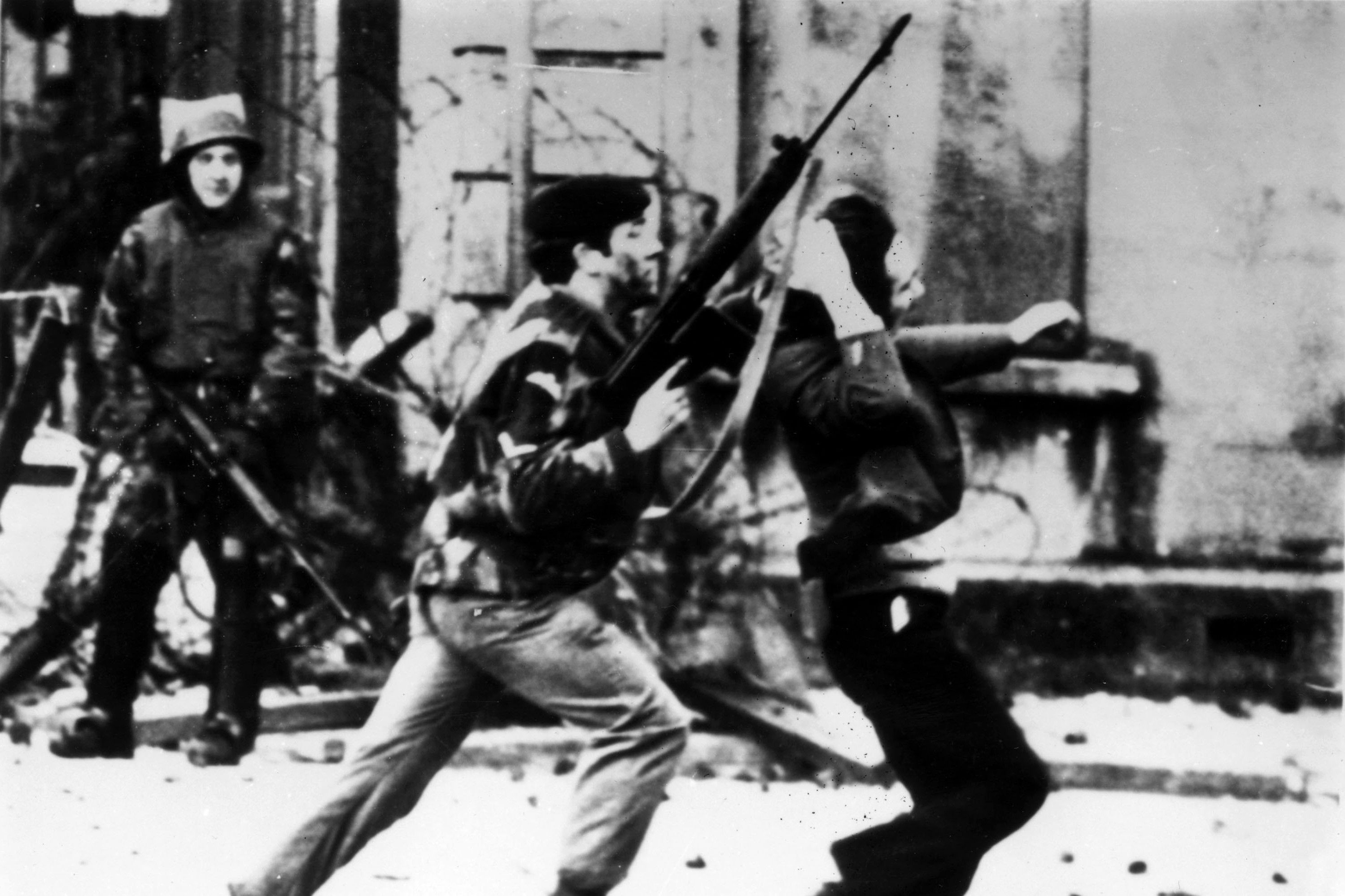 On January 30, 1972, 14 civilians were killed in Derry by British forces (Getty Images)

The decision to prosecute the ex-paratrooper was announced by the Northern Ireland Public Prosecution Service in March, nearly 50 years after the Bloody Sunday events. Soldier F, who is said to be in his late 60s, is the only former soldier to face prosecution.

Soldier F was not required to attend Wednesday’s proceedings, but 28 family members of the Bloody Sunday victims appeared in the Bishop Street Court House in Derry.

Journalist Leona O’Neill shared footage of the victims’ families walking together to the Bishop Street Court House in Derry on Wednesday:

Some of the families of those killed on Bloody Sunday make their way to the Bishop Street Court House #Derry ahead of the first listing of the Soldier F case. Footage @DerryFootage pic.twitter.com/MMXtE9W3pT

BBC reports that a lawyer for Soldier F requested the adjournment so that papers containing evidence could be fully considered, and added that the defense wanted to consider what witnesses would need to appear.

The trial was adjourned until December 4, and the presiding Judge Barney McElholm granted an interim anonymity order to continue the protection of the accused's identity.

Reuters reports that Ciaran Shiels, a lawyer for some of the victims’ families, said they were not happy with the fact that the Soldier F has been granted anonymity.

“We intend to make submissions to the public prosecution service that ‘Soldier F’ is prosecuted in a transparent manner as consistent with the majority of the prosecutions of soldiers in respect of the murder and attempted murder of Irish civilians here.”

RTE reports Mickey McKinney, the brother of victim William McKinney, said outside of the court: "This is a very significant event for us on the journey towards achieving the third and final demand of the Bloody Sunday justice campaign - the prosecution of a solider for murder and attempted murder on Bloody Sunday." 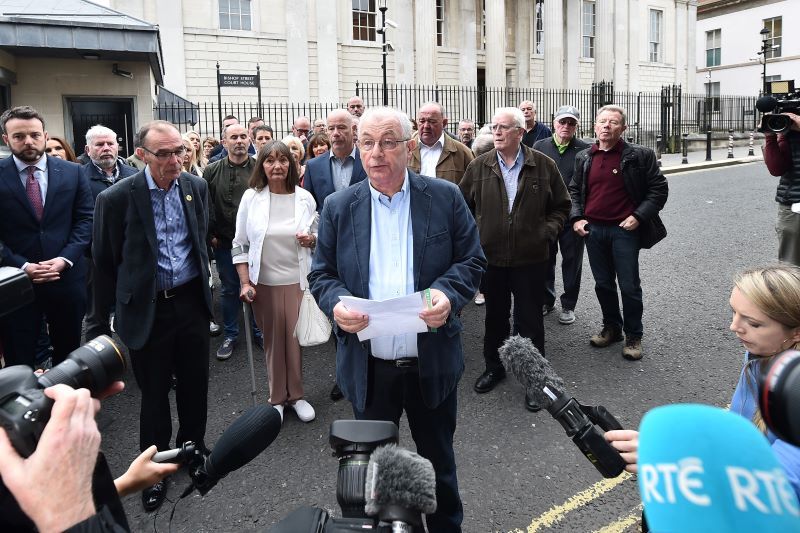 "I am very nervous this morning," he said. "We are glad and relieved that his day has arrived, it's been 47 and a half years." 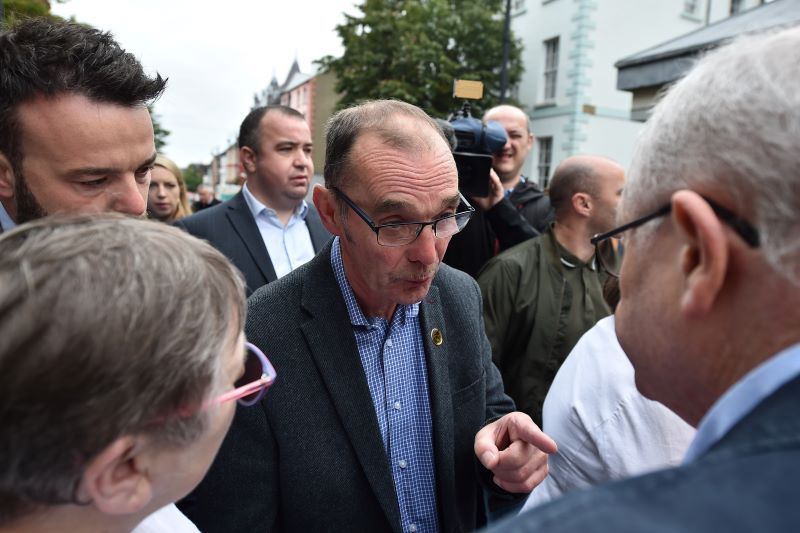 On Twitter, Mickey McKinney's sons showed their support for their father as he appeared in court for their uncle's death:

My dad goes court the day for his brother who was murdered by soldier F 47 years on 47years let that sink in!!#bloodysunday pic.twitter.com/ZpBDHFUgp4

A quick search on twitter this morning is enough to sicken yourself. You’d have to be an absolute phsycopath to show any kind of support for a man who has openly admitted to killing four innocent people. Proud to support my da and the rest of the Bloody Sunday families today! pic.twitter.com/36mBH6YO1I