Graffiti painted on Free Derry Corner in support of Soldier F, who faces trial next month for Bloody Sunday murders and attempted murders in the city, has been widely condemned. 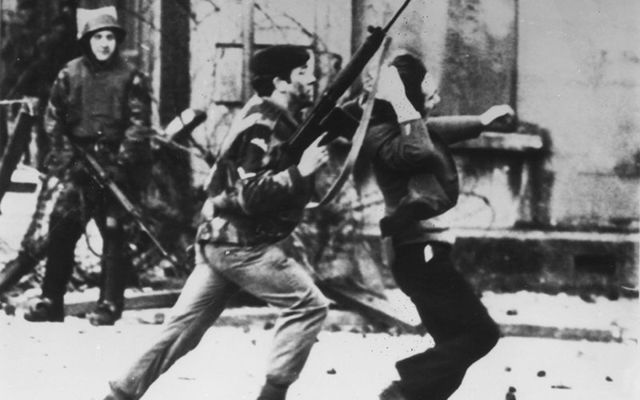 Graffiti painted on Free Derry Corner in support of Soldier F, who faces trial next month for Bloody Sunday murders and attempted murders in the city, has been widely condemned

The stenciled text sprayed in the heart of the Bogside with a Parachute Regiment logo above it was photographed by the Derry News just before two workmen appeared to paint over it.

Locals view the graffiti as a clear act of provocation.

Mickey McKinney, whose brother Willie was shot dead on Bloody Sunday, said he was “stunned” that someone would so brazenly enter the Bogside to carry out this act.

He said, “That’s come as a shock. The fact they’ve made their way into the Bog, I’m stunned. I wonder why someone would want to do that other than to provoke a reaction.”

Sinn Féin’s Raymond McCartney, a member of the lapsed Stormont power-sharing administration, said, “Whoever was behind this incident, all they were attempting to do was to cause hurt to the families of Bloody Sunday who have battled for 47 years for truth and justice.”

The first court hearing for Soldier F, a former paratrooper, will take place on September 18.  He is accused of two murders and four attempted murders in Derry when paratroopers shot at civil rights demonstrators in January 1972. Thirteen died and 15 were shot and injured in the onslaught.

The Northern Ireland Public Prosecution Service (PPS) has written to bereaved families to inform them that Soldier F’s committal hearing will take place in Derry courthouse on September 18.

The soldier, a grandfather in his 70s, has been charged with the murders of James Wray and William McKinney, and the attempted murders of Joseph Friel, Michael Quinn, Joe Mahon, and Patrick O’Donnell. He does not necessarily have to appear in court in person at this stage.

The prosecution of Soldier F was initially announced in March. Families of victims had pushed for additional soldiers involved in the deaths to be prosecuted.

However, the PPS said that 16 other former soldiers, and two suspected former members of the Official IRA, would not face charges. Prosecutors decided, after a six-year police investigation, that the admissible evidence was insufficient.

Read more: Memorial to US Navy unveiled in Derry