Irish government could not stand by Troubles amnesty, Coveney argues

Simon Coveney says the Irish government could not stand by "a general statute of limitations that is effectively an unconditional amnesty" on Troubles legacy issues. 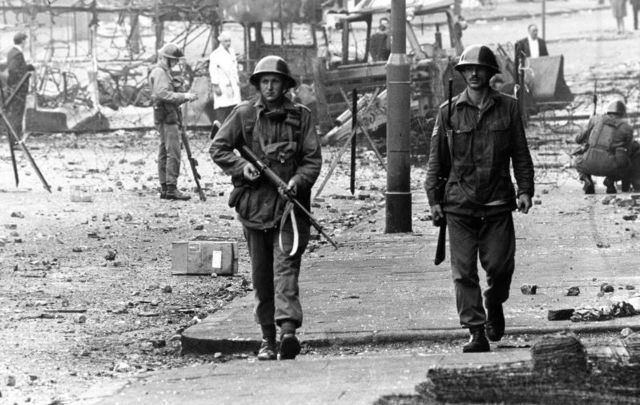 August 16, 1969: British soldiers on patrol beside barbed wire defences at the junction of Percy Street and Falls Road in Belfast during unrest in Northern Ireland. Getty Images

Simon Coveney, Ireland’s Minister for Foreign Affairs, continues to speak out against the British government’s recent announcement to pursue a statute of limitations, "effectively an unconditional amnesty," on Troubles era incidents.

Northern Ireland’s Secretary of State Brandon Lewis set out the UK Government’s plans for legislation to address the legacy of the Troubles while speaking in the UK House of Commons on Wednesday.

Lewis said: “It is clear that the current system for dealing with the legacy of The Troubles is not working.”

In a new paper put forth by Lewis, he proposes a series of measures to address the legacy of the past in Northern Ireland which features three key proposals: a new independent body to “focus on the recovery and provision of information about Troubles-related deaths and serious injuries;” a “major oral history initiative;” and a statute of limitations to apply equally to all Troubles-related incidents.

“We have come to the view that this is the best and only way to facilitate an effective information retrieval and provision process, and the best way to move Northern Ireland further along the road to reconciliation," Lewis said.

Lewis’s paper on how to address legacy issues in Northern Ireland can be viewed here.

Responding to the announcement on Wednesday, Coveney said on Twitter: “This is not a fait accompli.”

This is not a fait accompli. This is UKG outlining its position. Irish Govt has very different view (Stormont House), as do NI political parties & victims groups. SOSNI & I have committed to an inclusive dialog to try to agree consensus & that’s underway. https://t.co/MCQt5mbKgI

He said in a further statement that day: “We have agreed to have a process of intensive engagement with the British Government and the NI parties to find a collective way forward on legacy issues and that should be the focus now.”

He added: “We do not believe the UK proposals published today can be the basis for dealing with legacy cases, or would be supported by the parties or people in Northern Ireland, and there will be a strong onus on the UK Government in the engagement process to explain how their proposals could fully comply with their  ECHR and other legal and international human rights obligations, or properly meet the needs of victims and their families.”

The following day, Coveney penned an op-ed for The Guardian entitled “British plans for a Troubles amnesty would breach international obligations.”

In his op-ed, Coveney writes how in 2014, the UK and Irish governments came together and “negotiated a comprehensive and balanced framework for dealing with the legacy of the past – the Stormont House agreement.”

Coveney acknowledges that the Stormont House Agreement did not win universal praise, but adds that “those who would criticize it have a very high bar to clear to provide a workable and sustainable alternative that is clearly better.”

Coveney says he and Lewis agreed last month that “we should begin a process of engagement with the Northern Ireland parties on legacy issues.”

“The aim of these short, focused discussions is to find an agreed way forward that will allow implementing legislation to be introduced in the UK and Ireland by the end of this autumn.

“These talks will involve both governments and the five main Northern Ireland parties, and will engage with victims’ representatives and stakeholders from all sides.”

Coveney says that while the new statute of limitations proposal will be considered in upcoming discussions, proposals from the parties or from victims’ groups will also be discussed.

He continues: “However, in our view, an approach based on a general statute of limitations that is effectively an unconditional amnesty would not have the support of the political parties in Northern Ireland. It would not have the support of those representing the bereaved families left behind by conflict in Ireland, north or south, or in Britain. Nor could the Irish government stand over it.”

Coveney believes that “every family bereaved in the conflict must have access to an effective investigation and to a process of justice, regardless of the perpetrator.”

While some may encourage the UK to act unilaterally in “finding full consensus on a way forward in Northern Ireland to deal with the legacy of the conflict,” Coveney argues that “this would be politically and legally unsustainable, and would damage relationships and trust critical to the protection of the achievements of the peace process.”

He concludes: “We do not believe an approach based on a general statute of limitations would be compatible with the obligations of the European convention on human rights. It would undoubtedly be tested in the courts and if it failed there, it would only add years of uncertainty and misery for families with no benefit.

“We will not advance reconciliation by moving away from a commitment to accountability or shying away from difficult truths. Above all, any way forward must be based on a collective approach, like that agreed in the Stormont House framework. If the UK government, or other parties to that agreement, believe it needs to be amended, this must be something we discuss and agree together.”