The British government will be introducing a bill that will "give effect to a new, revised" Northern Ireland Protocol in the coming weeks, Foreign Secretary Liz Truss confirmed today. 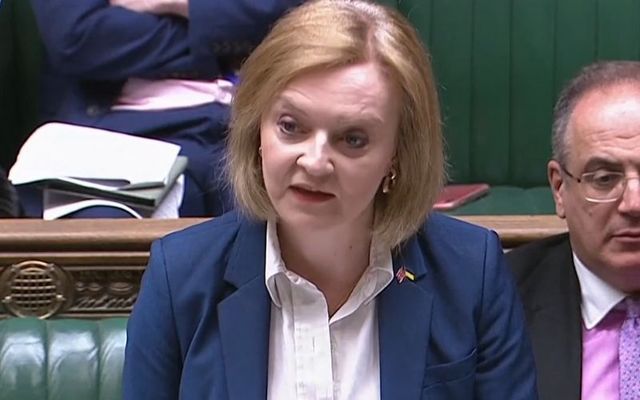 May 17, 2022: UK Foreign Secretary Liz Truss speaking in the UK House of Commons confirming that a bill will be introduced to revise parts of the Northern Ireland Protocol. Liz Truss @trussliz, Twitter

UK Foreign Secretary Liz Truss confirmed today, May 17, that the British government will be putting forth legislation to change the Northern Ireland Protocol, which was agreed upon in 2019 as a part of Brexit.

"The Bill will contain an explicit power to give effect to a new, revised Protocol if we can reach an accommodation that meets our goal of protecting the Belfast Good Friday Agreement," Truss said in the UK House of Commons today, May 17.

“We remain open to a negotiated solution, but the urgency of the situation means we can’t afford to delay any longer.”

The legislation will be introduced in the coming weeks, Truss said.

"I want to be clear to the House that this is not about scrapping the Protocol," she noted. "Our aim is to deliver on the Protocol’s objectives."

? WATCH LIVE: My statement on the Northern Ireland Protocol from the @HouseofCommons https://t.co/fMADC7g3kG

As a matter of protest against the Protocol, the DUP is refusing to enter into power-sharing in the wake of the elections. This comes just a few months after the DUP collapsed Stormont, also in protest of the Protocol.

“Businesses are benefiting from the huge opportunities afforded by the Protocol to create jobs and attract investment through unique access to the British and EU markets.

“The British government should stop creating further instability, end the threats to take unilateral action, and work constructively with the EU in negotiations to find solutions to fix the problems.”

Sinn Féin MP @JohnFinucane has said while Boris Johnson’s Tories launch a plan to break the law, they continue to give cover to the DUP to block an Executive being formed to support workers and families https://t.co/rymLeigcpS pic.twitter.com/zciIC8882k

Leader @J_Donaldson_MP welcomes the Government's statement outlining its plans to introduce legislation to change the Protocol, but says that words are not enough, decisive action is needed, and soon. pic.twitter.com/vGG3x5JqE6

The reports about the impending British changes to the Protocol were met with considerable pushback from Ireland, the rest of the EU, as well as the US.

Simon Coveney, Ireland's Minister for Foreign Affairs, said today that he "deeply regrets the decision of the British government to introduce legislation in the coming weeks that will unilaterally dis-apply elements of the Protocol on Ireland/Northern Ireland."

On Twitter, he hit out at the UK's actions:

Maroš Šefčovič, Vice-President of the European Commission, said today that the UK's plan to "table legislation that would disapply constitutive elements of the Protocol raises significant concerns."

He said: "Should the UK decide to move ahead with a bill disapplying constitutive elements of the Protocol as announced today by the UK government, the EU will need to respond with all measures at its disposal.

"Our overarching objective is to find joint solutions within the framework of the Protocol. That is the way to ensure legal certainty and predictability for people and businesses in Northern Ireland."

Significant concerns about the announcement by the UK government. Unilateral actions are not acceptable.

The potential of the flexibilities proposed by the @EU_Commission is yet to be fully explored. They can deliver a real difference on the ground.