Senior judges dismissed a pan-unionist and Brexiteers challenge to the post-Brexit trading arrangement after finding that it subjugates part of the Act of Union 1800, based on the sovereign will of the British Parliament. 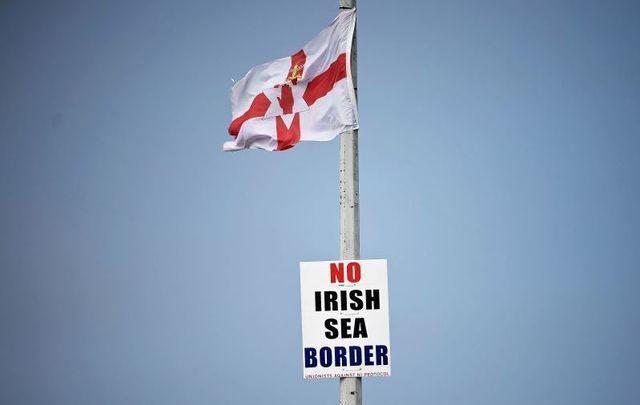 Anti-Irish sea border posters at the entrance to Larne harbour, one of the main entry points between Northern Ireland and the rest of the United Kingdom. Getty

The Northern Ireland Protocol is lawful and must take precedence over a centuries-old legislative clause on trade with Britain, the Court of Appeal in Belfast ruled on Monday

Senior judges dismissed a pan-unionist and Brexiteers challenge to the post-Brexit trading arrangement after finding that it subjugates part of the Act of Union 1800, based on the sovereign will of the British Parliament.

The decision is a huge blow to aspirations by unionists, particularly within the Democratic Unionist Party (DUP), for the Protocol to be abolished.

The fact that the legal challenge was dismissed on all five grounds reinforces the sense that unionism stands alone, beset by enemies, apparently, on all sides. Most hurtful of all, according to The Irish Times, is that unionism has been betrayed by its supposed defender, the U.K. government.

The case will now likely go to the Supreme Court in London, but the reality remains that one of the consequences of Brexit has been the alienation of a section of society in Northern Ireland. How to reconcile them will be a challenge for all.

In summary of Monday’s decision, Lord Chief Justice Dame Siobhan Keegan stated, “This case is very far from one where a court would even begin to contemplate whether it could intervene as the appellants suggest.”

Implemented at the start of 2021 to prevent a hard Irish border, the Protocol means Northern Ireland remains in the EU single market for goods.

The new Brexit trade checks on produce entering the province from Britain have created a de facto customs border in the Irish Sea.

Amid widespread unionist and Brexiteer opposition to the accord, a coalition including Traditional Unionist Voice leader Jim Allister, Baroness Kate Hoey, and former Brexit Party MEP Ben Habib mounted a legal bid to have it declared unlawful.

After the appeal court hearing, a furious Hoey tweeted the decision of the judges meant an end to the Good Friday Agreement.

Hoey, a former Labour MP and minister who became a Tory and DUP supporter in 2019, tweeted, “Well that’s the end of the Belfast/GFA. Pro Union people can no longer rely on it for protection of their rights as British citizens. All cross border agreements must end and no Executive/Assembly until Protocol is ditched.”

Monday’s ruling came as Britain’s Foreign Secretary Liz Truss reportedly set out plans to put a dispute between the U.K. and the EU over the Protocol on hold because of the Ukraine crisis and more urgent efforts between the EU and London to push for peace.

According to The Sunday Telegraph, Truss has written to Prime Minister Boris Johnson suggesting the plan to trigger Article 16 over the Protocol should be parked.  Article 16 sets out the process for action if the Brexit deal leads to serious problems in Northern Ireland.

Truss proposed an interim deal involving a “green lane” for goods traded between Great Britain and Northern Ireland only.